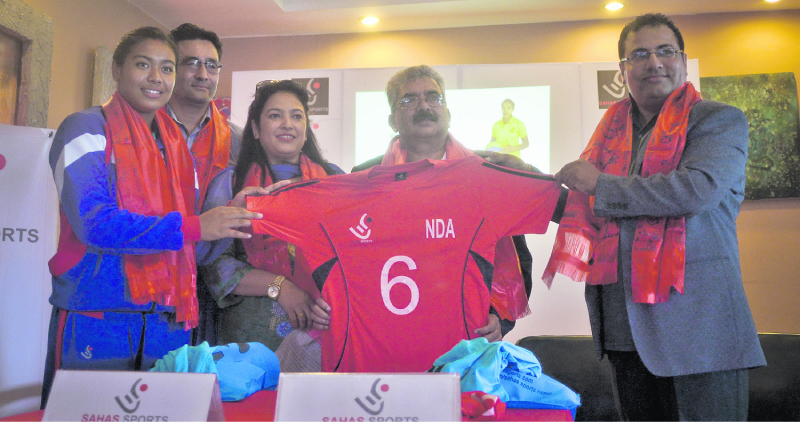 Speaking in the signing ceremony organized in the capital on Tuesday, Sahas’s President Janak Neupane informed that the agreement between his company and Pratibha is worth of Rs 170,000. The contract that will last for one year includes Rs 120,000 in cash and kits worth of Rs 50,000.

Speaking in the event, Neupane said that the deals with national women’s team’s key player Pratibha and her club is a campaign to get connected with Nepali sports. “Volley ball is national sports and Pratibha is one of the biggest stars of this sport. To get connected with her and New Diamond which is prestigious team in the country is very proud moment for us,” said Neupane. “Signing the agreement with Pratibha and New Diamond, we have started our campaign of promoting Nepali sports and it will spread to other sports and players as well in future.”

Pratibha thanked Sahas sports for choosing her as brand ambassador. “It is the one of the happiest moments in my career. It is positive for overall Nepali volleyball,” said Mali.

Meanwhile, New Diamond’s head coach Kumar Rai said that the agreement with Sahas is proud moment for the Nepali volleyball. “We hadn’t expected anyone to come to us with such offer. We had courageously established the New Diamond volleyball team ten years back. Now Sahas has shown same kind of courage to sponsor us, we are very thankful to the company,” said Rai who has guided New Diamond to several tittles in domestic women’s volleyball.

In the event which was also the launching program of the Sahas brand, Nepal Volleyball Association (NVA)’s general secretary Jitendra Bahadur Chand, Nepal Sports Journalist Forum (NSJF)’s president Mahesh Acharya among others expressed their belief of Sahas’ agreements with Pratibha and her club to promote Nepali volleyball.