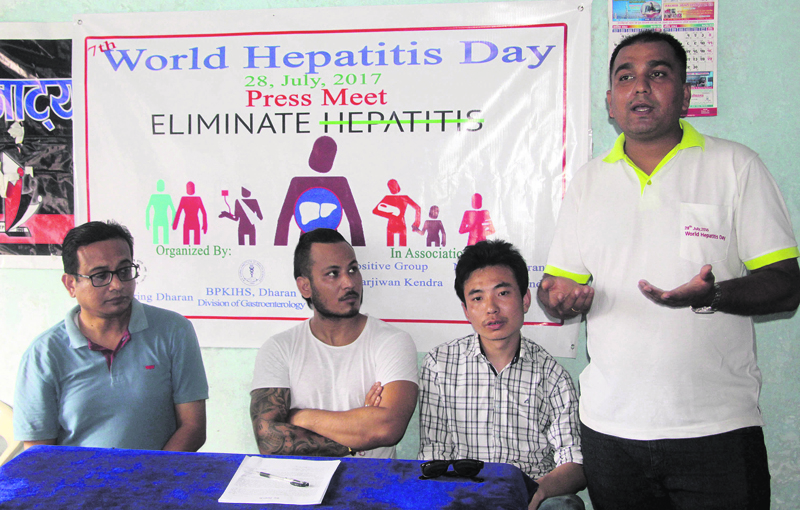 DHARAN, July 29: Stating that hepatitis C is a fast-spreading 'viral time bomb' which needs serious intervention, health specialists and stakeholders on Friday urged the government to take necessary steps to curb the disease. They have insisted on free treatment for patients suffering from the deadly disease.

At a program organized by BP Memorial Hospital on Friday on the occasion of World Hepatitis Day, stakeholders shed light on hepatitis C and its features and treatment. They have asked the government to provide necessary equipment for the treatment of the disease for free to the hospital.

The demand was put by HIV AIDS coordination committee along with Recovering Dharan, Sanjeevani Punarjeevan Center and Dharan Positive Samuha.

“The problem of hepatitis C is worldwide. In country like ours, its prevention and cure is even challenging,” said Sumit Dangi, vice president of the coordination committee. “Worldwide, over 80 percent of those who abuse drugs through injection get affected by hepatitis C. In Nepal too, our boys and girls are being affected in the same ratio,” he added.

Stating that drugs abuse is going unchecked in the country, Dangi said that various health issues including hepatitis C is taking toll on youths and others. “In Dharan, the problem is severe. In Kathmandu and elsewhere, it is no less deadly,” he noted.

According to Dangi, the government has not taken the issue seriously. There is no awareness about the disease. There is lack of access to health services and counseling. Dangi also lamented the lack of necessary machines in hospitals for testing of hepatitis C.

Machines to test viral load and genotype are very costly and private health centers cannot easily afford to have it. Just for its testing, people are forced to go to Kathmandu or Siliguri from Dharan, he said.

As per the data of World Health Organization, there are 200 million Hepatitis C infected people in the world. Similarly, every year, three to four million new people get affected by it. Hepatitis C is one of the top ten reasons of death in the world, according to health journals.

“This problem is actually on the rise. But we are not much aware. This could be really dangerous in the days to come,” said Dr Bikram Pradhan, chief of Division of Gastroenterology of BP Memorial Health Foundation. “It is a deadly infection,” he added.
Pradhan said that hepatitis C is a long-term or permanent infection unlike hepatitis A and E. While hepatitis A and E are much easily cured, hepatitis B and C last long. “Virus of hepatitis C infect the liver. It grows very fast and affects the liver very badly,” he said.
According to Pradhan, hepatitis C is 10 times more infectious than HIV. Yet, the government has not taken it seriously.

“When it enters the body, the virus begins to eat the liver. It is so much dangerous, 10 times infectious than even HIV. However, we are not yet aware of it. The government has not given any attention,” he stated.

“It is not that people are not getting free health services. In fact, check-ups and medicines of several deadly health problems are provided for free. But hepatitis C has not drawn the attention of the concerned authorities because of the lack of awareness among the policy makers,” he noted.

According to Pradhan, death of HIV-infected people of late is often due to hepatitis C infection. In fact, people do not notice the problem of hepatitis immediately. They reach hospital only when it gets severe and they cannot be treated.

“Infected people come to know about it much later, that's very unfortunate. It happens because hepatitis shows no symptom,” Pradhan said.

Hepatitis C gets chronic when it is not treated on time. And this invites psoriasis or dysfunction of liver in 15 years. Later, it might cause cancer as well, said Pradhan. “Psoriasis is a dangerous state. So, intervention must be taken before one suffers from psoriasis,” Pradhan said. “If hepatitis C infects one who is already infected by HIV positive, it makes the persons too weak,” he added.

Pradhan urged the government to make proper arrangement for hepatitis C intervention. “A national-level policy must be developed to counter this disease,” he says.

KATHMANDU, May 2 : IMS Motors, an authorized distributor of SsangYong Motors for Nepal, has introduced SsangYong Korando C in the... Read More...

Viral load test for Hepatitis B now in Nepal

KATHMANDU, July 13: The viral load test for Hepatitis B could be done in Nepal now on. The test is... Read More...