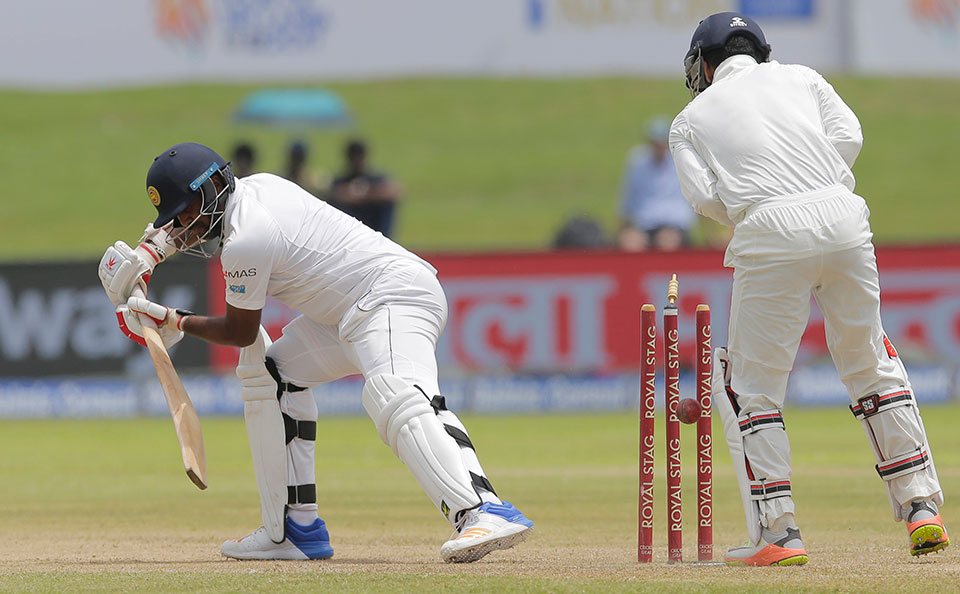 Sri Lanka's Lahiru Kumara is bowled out off a delivery by India's Raveendra Jadeja during the third day's play of the first test cricket match between India and Sri Lanka in Galle, Sri Lanka, Friday, July 28, 2017. (AP)

GALLE, Sri Lanka, July 28:  India opted not to enforce the follow-on despite holding a commanding 309 run lead over Sri Lanka at the end of their first innings on Day 3 of the first test on Friday.

Resuming on 154-5 in reply to India's huge first-innings total of 600, the Sri Lankan middle and lower order folded quickly as the home team was bowled out shortly after the lunch break for 291, with Dilruwan Perera left stranded on 92 not out.

With plenty of time still left in the match, India resisted the temptation to send Sri Lanka back in, choosing instead to bat again in the hope of building an unassailable lead before making an early declaration.

Sri Lanka added 135 in the morning session at a healthy run-rate but lost three vital wickets in the process.

Angelo Mathews was the first to depart. He started the day unbeaten on 54 and had advanced to 83 when he was caught by Virat Kohli at short cover off the bowling of Ravindra Jadeja.

The left-arm spinner then picked up his second wicket of the innings when he got rid of Rangana Herath for nine, with Ajinkya Rahane taking the catch at slip.

Allrounder Hardick Pandya, on his test debut, then captured his first test wicket when he bowled out Nuwan Pradeep for 10, adding to his half-century with the bat.

Sri Lanka survived until lunch but the innings came to an abrupt end in the second over after the resumption when Lahiru Kumara was bowled by Jadeja for two.

With the injured Asela Gunaratne unable to bat, Perera ran out of partners eight runs just short of his maiden test century.