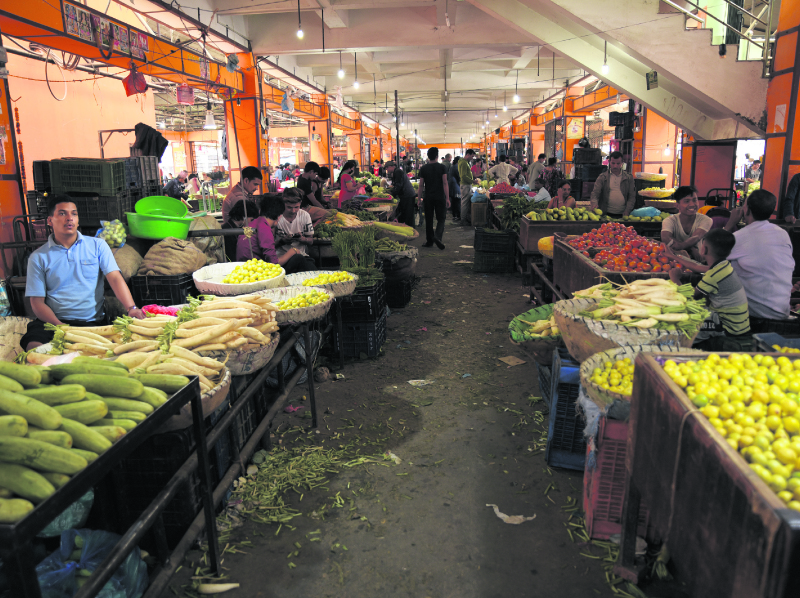 KATHMANDU, July 23: The Narayanghat-Mugling road section saw recurring obstructions the past year, but it had little effect on the vegetable supply of the Kathmandu Valley. A surplus of vegetable supply from neighboring districts has prevented substantial change in the price, which is different in comparison to the previous year's high prices.

The supply of most vegetables to the Valley takes place through the route of Narayanghat-Mugling road. The road was obstructed because of ongoing construction and continuous landslides during the monsoon. However, it did not have much impact in the Valley, thanks to an increased supply from the neighboring districts. If it goes on like this, the valley's dependency of vegetables on the Tarai region will be significantly reduced.

Districts around Kathmandu  -- Dhading, Kavre, Makawanpur, and Nuwakot -- have been supplying vegetables such as French beans, cow peas, tomatoes, pumpkins, and smooth gourds to the Valley.

“The scarcity of vegetables in the market was not felt even during the closure of Narayanghat-Mugling road section,” said Binaya Shrestha, deputy director at Kalimati Fruits and Vegetable Market Development Board (KFVMDB). “Though the late arrival of vegetables did cause fluctuation in prices to some extent, we had enough supply of vegetables for the people living in the Kathmandu Valley.”

“The quantity of vegetable supply determines the price,” said Prakash Upreti who has been running a wholesale vegetable stall in Kalimati since the last 12 years. “The road obstruction did hamper our business a little but not as much as it used to in the past.”

He said that the delayed arrival of vegetables caused prices to go up initially, but as soon as they were unloaded in the wholesale market, the price would be adjusted. “Ladies' finger and snake gourds are the chief vegetables that I know are supplied from outside the Valley,” Upreti told Republica. “Their prices did not see that much of change due to obstruction of the Narayanghat-Mugling road section.”

Gopal Shrestha, a vendor at the Kalimati market, said that lemon is imported from India and is transported to valley through the very roadway. “The closure of the road section hampered its supply but the price has not seen much change.”

Binaya Shrestha, deputy director of KFVMDB, said that seasonal vegetables are supplied to the valley from the neighboring districts and we are dependent on India for dried onions only. “Items like lemon, fresh fish, and fruits are also imported from India, and their prices vary depending on supply and quality,” he further added. “If alternatives to these items are found in the country or around the Valley, the gap in distribution of such vegetables during road obstruction can be filled.”

The production of vegetables is rising in Makawanpur and Nuwakot districts to help supply in the Valley during times of road obstruction.

KATHMANDU, July 31: The commodities exchange market has now come under the regulatory ambit with the passage of Commodities Exchange Market... Read More...

KATHMANDU, May 2: The stock market has been buoyed up on Tuesday, the day set by the Election Commission for... Read More...

COVID-19 tests being conducted from 10 different places: MoHP
21 hours ago

PM Oli addresses the nation (with video)
5 hours ago

INFOGRAPHICS: Nepalis affected by COVID-19 throughout the world
18 hours ago