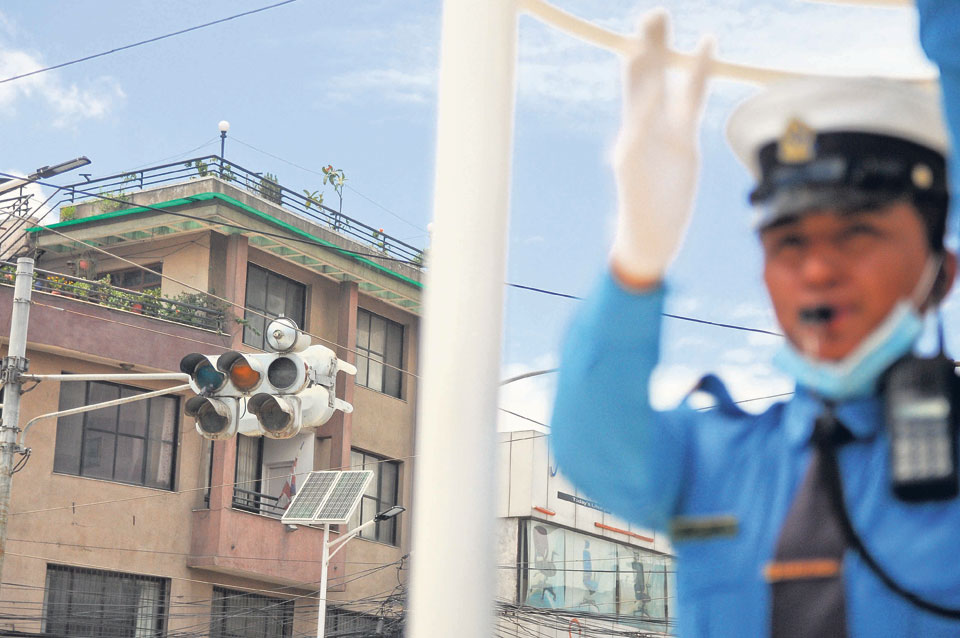 There are traffic lights in 35 junctions of Kathmandu but, at the moment, not a single one is functioning. In fact it’s been years since Kathmandu residents even saw them flicker. In all this while, the metropolitan traffic police department has been handling traffic in the capital manually. While the public suffers because of mismanaged traffic, the authorities don’t seem to be all that concerned about the non-functional lights. What’s going on with the traffic lights in Kathmandu?  Neeraj Chandra Roy reports.

Nepal is perhaps the only country in the world without a single functioning traffic light. Although there are traffic lamps at 35 junctions of Kathmandu, none of them are operational. It has been years since traffic in the capital city has been managed systematically through traffic lights. And it seems the issue isn’t on the government’s priority list.

The public, on the other hand, has no idea why there aren’t any traffic lights in the capital. The traffic police department says it is their duty to regulate traffic not to maintain and repair traffic lights. The Department of Roads, which is responsible for maintaining traffic lights, says that the government has handed the responsibility to another project to replace the lights. Asian Development Bank was supposed to fund the project but it recently withdrew its support. So what’s cooking? Here are a few things that might give you some insight into the problems of traffic light in Kathmandu.

Obsolete technology
Experts say that the system of traffic lights that Nepal is using has become obsolete. The spokesperson at the Department of Roads (DoR), Dayakant Jha, informed The Week that the technology set up by Japan more than a decade ago is no longer in use. “We can’t even get the spare parts of those traffic lights. So, we have been unable to repair the lights,” said Jha, adding that the whole infrastructure should be replaced.

How long has it been?
The Valley Traffic Police Division said that the traffic lights in the capital have been out of use since 2063/64 BS. It’s been almost a decade since the Valley denizens have been without traffic lights but there had been attempts to revive the lights during the last SAARC summit held in Nepal a few years ago.

“We tried to repair the lights during the 18th SAARC Summit in 2014. We hired a Chinese company for the repair works but they could repair the traffic lights only in a few places,” said Jha.

According to spokesperson Jha, operating traffic lights only in a few junctions is pointless as the system must be synchronized for effective results. For example, the traffic light of a certain crossroads should operate at a certain time interval in coordination with the next junction. If the system is not synchronized there will be more chaos, says Jha. “So the traffic police decided to do the job manually. They didn’t want more confusion,” he added.

What is the overall state of traffic lights?
According to DoR, there are traffic lights in 35 junctions within the Kathmandu Valley. But none of them are functional. A few of them blink occasionally but that too is of no use. The Traffic Directorate at the Police Headquarters said that there aren’t traffic lights outside the Valley.

“Decades ago, we had traffic lights. This was when there were very few vehicles. But now the number of vehicles have gone up and the population is also increasing but we lack traffic lights as well as other infrastructure in the capital,” he added.

Who is responsible?
Nepal Police spokesperson Sarbendra Khanal said that the repair and maintenance of traffic lights is the responsibility of the DoR. Chief of the Valley Traffic Police Division DIG Mingmar Lama said that the job of traffic police is to regulate the traffic while it is the duty of the DoR to maintain the infrastructures.

“We have been facing extra burden and shortage of manpower due to this problem. Our work force is fully occupied with manually handling traffic at main crossroads. Due to this, we haven’t been able to deploy traffic police in the inner roads,” said DIG Lama.

The DoR, on the other hand, says that although it is the responsible body to maintain roads and traffic lights, the government has given the authority to some other project.

“We are ready to repair the lights if the government orders us to do so. But it has given the authority to Kathmandu Sustainable Urban Transportation Project (KSUTP),” said Jha, spokesperson of DoR.

According to Jha, KSUTP had received government funding to carry out detailed survey of the traffic lights in the Valley but it hasn’t been able to carry out any tangible work except preparing reports.

What’s the current status?
The Kathmandu Sustainable Urban Transportation Project under the Ministry of Physical Infrastructure and Transport had carried out a detailed survey regarding the condition of the traffic lights in the Valley in collaboration with the Asian Development Bank. After estimating the cost of replacing the lights with new ones, it recently issued a call for tender.

However, Project Director Ananta Acharya said that the bidders quoted high amount due to which the plan had to be cancelled. “The bidders quoted about 25 percent more than our estimate. So we couldn’t grant them the project,” said Acharya. He also lamented the fact that even the ADB has withdrawn its support.

“Our existence is in limbo. How can I say anything about the roads? The term of this project has been extended for six months and then we will be jobless,” said Acharya. He also mentioned that it was difficult to operate a project when the project chief gets replaced every now and then.

“I’m the tenth director of this project in the last seven years. I assumed office just 15 days ago. Some project directors get transferred in just three months. How can we work properly in such a condition?” he questioned.

“No one wants to stay here. I would have been left here alone had we not maintained strict discipline. Becoming a traffic police is a thankless job,” said DIG Lama. He also said that, a while back, the Ministry of Home Affairs had instructed the concerned authorities to replace traffic lights within 15 days.

“But it has already been three weeks and nothing has happened,” he said. And since none of the government authorities have a definite answer as to when the city will get new traffic lights, we are left wondering how long will it be before we do or if we even will at all.

When the lights come on (Photo feature)

People say Kathmandu is dusty when it doesn’t rain and muddy when it does but it always looks surreal and... Read More...