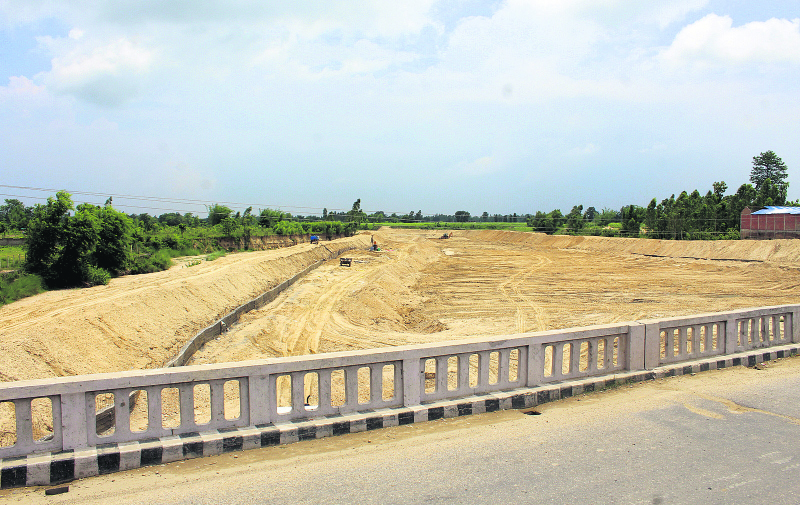 JANAKPUR, July 14: Land mafias have illegally erected a wall by encroaching the banks of Basai River in Mithila Municipality in Dhanusha district.

Authorities have remained mum although the illegal structure was made right under a bridge along the East-West Highway, which is in front of the Area Police Office.

Walls have been made in both sides of the river encroaching 10 to 15 meters of land. The total length of the bridge is 96 meters but the river has shrunk to half the size because of the encroachment. The wide river now looks like a stream.

Land Conservation Office (LCO), which has been entrusted with the responsibility of conserving the river, is instead co-operating with the land mafias by funding them in the illegal act. Locals have accused LCO of providing Rs 700,000 for making the wall.

Meanwhile, Mithila Municipality has admitted that the public land along the river has been illegally encroached upon and has even assured of taking action against it.

“Anyone travelling by the highway can easily find out that the land has been illegally obstructed,” said Raj Kumar Das, acting chief of Mithila Municipality. He told Republica that some government officials will be sent to the river area in order to protect the public land from being invaded. He further informed that those officials will compare the length and width of the river with an earlier map. If the wall has been made by encroaching upon the land, it will be demolished right away, Das claimed.

“It will be a great disadvantage for those encroaching the land. Disturbing the natural flow of the river will badly affect the fields and nearby lands,” Das said. According to him, the authorities will take corrective measures after taking proper measurement of the river's width.

A local Rajaram Mahato owns land below the bridge on both sides of the river.
“The LCO hs only assured us of providing funds to make the retaining walls. Actually we locals, who own lands nearby ourselves have collected funds to make the walls,” said Mahato.
But the locals say that no organization or individual has provided fund or budget for building the wall and Mahato has been building the wall on his own.

Mahato flatly rejected the accusation of locals that he had encroached upon the public land. “I have sought for government surveyor to take measurement,” he said.

Due to the temptation of getting more land, many illegal owners in Saptari have been doing the same job in Khando River because of which the locals get badly affected by floods every year. When the natural flow of the river is obstructed, there is high probability of water entering the settlements during rainfall. Locals have urged the responsible authorities to take stern action against the illegal owners on time so that they won't have to deal with serious problem in future.