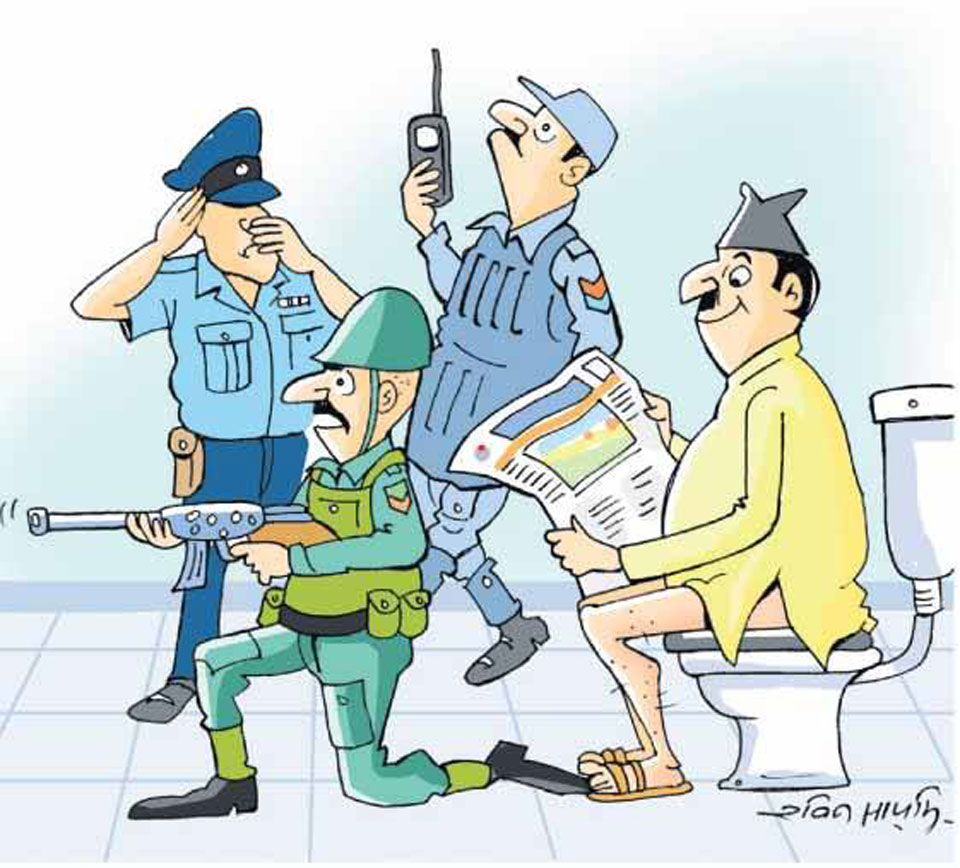 KATHMANDU, July 13: Top officials of the state including the president, vice-president and prime minister are always surrounded by a huge security presence, just like in a situation of serious security threat.

However, given the normal political situation obtaining  in the country of late, security experts  are starting to wonder if the top officials are really at any risk.

The state has continued to provide costly security arrangements for a large number of incumbent and former officials, politicians and other personalities.

At least 275 army personnel and 10 from the police  are deployed for the security of the president, 75 army and seven police personnel for the vice-president, and 175 army, 80 police and 50 armed police force personnel  for the prime minister.

As per estimates by officials at various government agencies concerned, these security arrangements cost Rs 8.2 million  a month in the case of the president and 7.8 million  for the prime minister.

Four layers of security are provided for the president, vice president, prime minister and also other ministers. The security personnel are deployed during their movements and to guard  their residences. National Intelligence Department personnel are also  deployed to gather and analyze information about any security threats.

Former officials including ex-prime ministers and ex-ministers are also provided security. Security personnel are deployed at their residences and large numbers of them provide security during their movements.

The VVIP security procedures prepared by the Home Ministry in 2013 classify incumbent and former officials into the four categories of VVIP, VIP, average and general. They are provided security on the  basis of this  classification and  security threat assessments  of very high, high, average and general.

Security expert Deepak Prakash Bhatta believes that our VVIPs  are not under threat from any international terrorist group, separatist elements, rebel outfits or organized criminal gangs at present. “Our top state officials, political leaders and others may need to be provided security against any risk arising out of  sudden anger on the part of some individual or other, but not against by any planned attack. This threat level falls under  average security risk,” said Bhatta.

However, the security arrangements provided our top officials at present make it appear as if they are under serious security threat.

“None of the groups posing serious security threats are now active in Nepal. An average level of security arrangement is enough under these circumstances,” said Bhatta. “In providing a high level of security for our officials, we are giving an impression to the international community that Nepal is still a high security risk.”

Former additional inspector general Nabaraj Dhakal also believed that  Nepal at present is in a situation of average security threat. “The regular movements of leaders and top officials also prove that they don’t feel any security threat. They regularly attend weddings and bratabandha and rice feeding ceremonies  organized at  party palaces. This shows  they aren’t greatly worried about their security,” he said.

A committee comprising the secretaries of the home and defense ministries and the chiefs of all security agencies decides about the security arrangements to be provided to  VVIPs, VIPs and others.

According to Dhakal,  top officials and politicians  were not provided large security details prior to the Maoist insurgency that started in 1996.

The security details were beefed up during the 10-year armed insurgency. But the top  officials  continued to enjoy the same levels of security  even after the Maoists joined mainstream politics in 2006.

“The deployment of  personnel for someone’s security should be based on the threat assessment but in our context  a proper system hasn’t been developed for this,” said former AIG Dhakal.

Security expert Bhatta further claimed that in some cases there is also a practice of providing security  even for  individuals that do not qualify. “This is  because of the tendency of security officials to keep politicians   and  top officials happy,” he said. “Moving around with a security detail has become a matter of prestige. This is clearly a misuse of  taxpayer money. It has become imperative to  change  the underlying mindset.”

Home Ministry Spokesperson Deepak Kafle said the ministry is working on revising the directives for the deployment of security personnel for VIPs and big shots.

Up to 11 security personnel to be deployed per polling booth

KATHMANDU, March 18: Between three to eleven security personnel would to be deployed in each polling booth depending on the security... Read More...

PANCHTHAR, Aug 14: While the country is going through very difficult times due to monsoon-induced calamities, there have also been... Read More...

KATHMANDU, July 5: The trend of categorizing security personnel as “being under vetting” by the UN and various other international agencies... Read More...