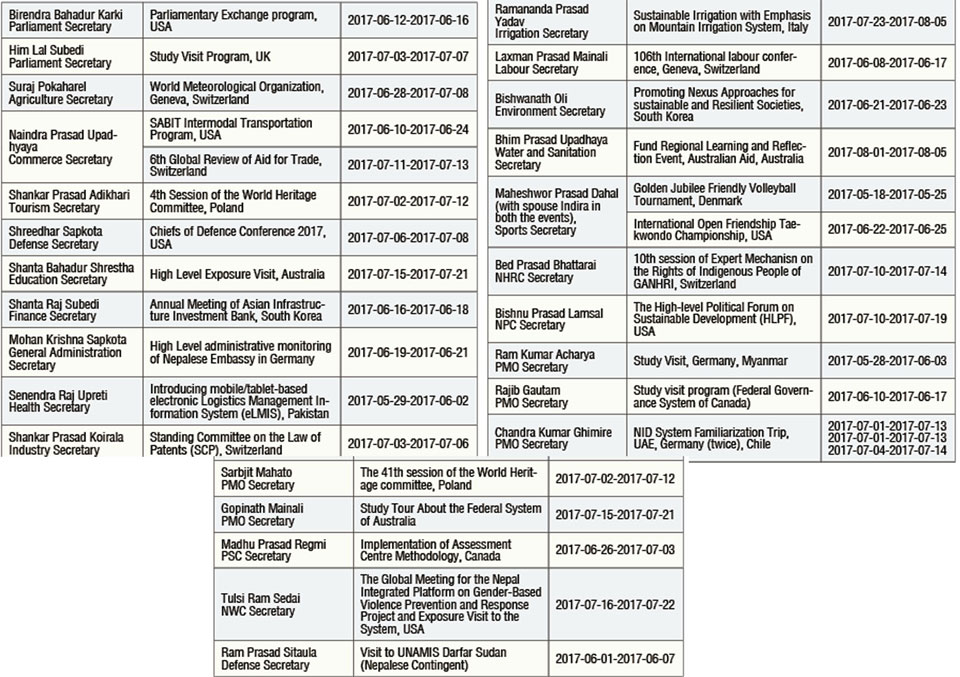 KATHMANDU, July 12: Most of the foreign trips involving civil servants that occurred in the last two months included programs with little gains such as overseas ‘study tours’, observation visit, reflective events in Europe and America. A government secretary and some other officials were even found to have wasted taxpayers’ money to attend friendly volleyball tournament in Denmark and taekwondo championship in USA.

Serious questions are being raised over millions of rupees ‘wasted’ on foreign trips after Republica on Wednesday published a story on overseas visits of over 1,400 bureaucrats in the last two months. Some more visits are scheduled to take place in the next few weeks. The last two months received unusually higher number of applications for foreign trip due to two phases of local elections and the fiscal year coming to an end. Every year, the government allocates budget for foreign visit which has to utilize before the end of fiscal year.

Except some exceptions, the majority of trips, especially those attended or in process of being attended by top bureaucrats including secretaries, joint secretaries and under secretaries, had little gains for the concerned employees or their organizations.

“Trips such as study tours and observation visit are completely unworthy for high-level officials including secretaries and joint secretaries. Despite this, many secretaries take such offers as good chance for retreat time and again. Such opportunities should be given to low-ranking officers including section officers,” said an official at the Prime Minister’s Office.

Documents submitted to the PMO by various ministries show government secretaries attending various events unsuitable for their status, wasting millions of rupees. In many instances, their spouse accompanied them.

In one instance, Maheshwor Prasad Dahal, secretary at the Ministry of Youths and Sports, went to Denmark just to attend the Golden Jubilee Friendly Volleyball Tournament. Similarly, Bhim Prasad Upadhyay, a government secretary currently in charge of Melamchi Water Project is set to attend the Fund Regional Learning and Reflection Event in Australia. Upadhyay is also taking his spouse with him in the program organized by Australian Aid.

Republica found that there are even bigger discrepancies in visits of joint-secretaries and under-secretaries. Many officials were found to have attended events unrelated to their office or nature of jobs.

“In my 30 years’ career, I have never gone to overseas trip on Nepal government’s expense except in one occasion that lasted nine days,” Upadhyay, who had visited numerous countries, said, suggesting that other trips were sponsored by other organizations.

But officials said the bill of all those visits, even those sponsored by foreign agencies, was directly or indirectly footed by Nepali taxpayers.

“The cost incurred in these visits should be seen as that of government agencies because that money was supposed to go to the taxpayers,” said an official at the Ministry of Finance, who requested not to be named.

Every year, Nepali taxpayers spend millions of rupees to foot over a billion rupees in travel bill including air tickets and travel allowances, according to preliminary estimate of government officials having knowledge about the cost.

An analysis of a list of visits that occurred from mid-May till present shows that the Ministry of Finance is ahead of other government bodies when it comes to foreign junkets. Similarly, there were equally higher number of participants from other ministries including the Prime Minister’s Office, Ministry of Defense and Ministry of Agriculture.

“Since the Ministry of Finance is authorized to sanction many such visits, they often manage to include one or two people in the trip,” said the Finance Ministry official.

Civil servants’ 1,400 trips cost taxpayers over Rs 1b
3 years ago