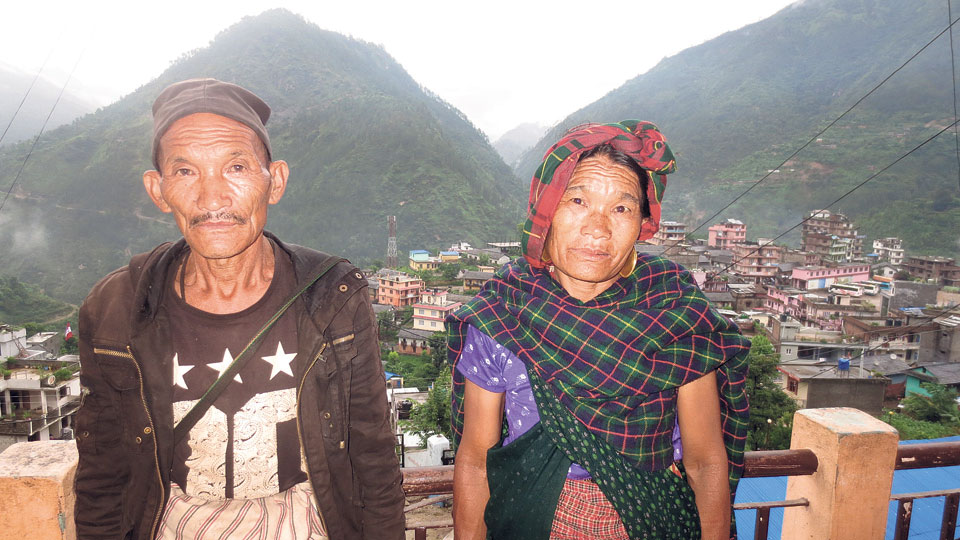 Bal Bahadur Rokka (L), whose house was set ablaze, and Sani Pun, whose two houses were destroyed by the rebels. Photo: Republica

ROLPA, July 10: On the evening of March 10, 1999, a group of local youths terrorized by the armed Maoist conflict were holding discussions at the house of Bal Bahadur Rokka at Lungri-7, Harjang. Troubled by the Maoist rebels, they had formed a 'retaliation committee' to patrol the village.

At around 10 pm, they realized that the main door of the house was locked from outside. They were horrified to know that the house was encircled by some unknown people who set it on fire. The youths inside the house tried their best to run for their lives but they couldn"t. One of them, who tried to get out through the window, was shot dead. The bullet pierced through his ear.

'My husband who was already burnt tried to escape from the window but they shot him dead,' said 56-year-old Dilmata Giri. 'My brother was also killed there. They brutally killed nine innocent people there,' she added.

The conflict victims came to the district headquarters to receive the final installment of the relief as per the announcement of the government. But they are still seeking answers for the killing of their family members.

The government has provided Rs 500,000 as relief to each conflict victim"s family. According to them, if there was peace they would have been able to live their lives even without this money but they lack it. Though they filed a complaint at the Truth and Reconciliation Commission (TRC) and the local peace committee, they got no response.

During the conflict period, as many as 969 people in Rolpa had lost their lives while 33 are still missing.

Gaumala Pun who saw her husband die in front of her eyes said, 'None of the dead bodies was recognizable as they all looked like charred wooden logs.' Like many family members, 17-year-old Naru Pun didn"t know why her father was set on fire. Since then, she started living in her maternal uncle"s house with her grandparents as she had lost her mother when she was a kid.

Naru who was suffering from psychological problems was found dead in her bedroom last year. 'She always kept thinking about her parents,' said Dilamata, her aunt, adding, 'After having dinner, she went to her room. We had not expected that she would be dead the day.'

Begam Bahadur Pun, Man Bahadur Giri, Amrit Giri, Puste Giri, Nar Bahadur Pun, Dhate Pun, Avan Pun, Gopal Giri and Tirkha Ram Giri of the same village of Rolpa were burned alive inside the house. All of them were farmers who worked day and night to earn two square meals for their families.

Bal Bahadur Rokka, the owner of the house who was successful in saving his life by running from the window, said 'It breaks my heart when I remember that terrible night.' Despite being shot thrice in the head, Rokka survived. 'The next day, a helicopter came to collect the dead bodies. Even the police noted the incident but I still wonder why nothing has been done about that horrible incident, as if nothing happened there,' said Rokka.

According to 73-year-old Rokka, he has not received a penny from the government or other organizations despite losing his house, clothes, food and everything. Similarly, though two houses of Sani Pun that were used as police stations were completely damaged, she has not received any compensation yet.

A Maoist leader Babulal Pun of Rolpa, however, said that the unfortunate incident had taken place as some people from their rival parties gathered inside the house “to plot against the Maoists”. He claimed that some innocent villagers were killed as they were used as human shields and weren"t allowed to come outside the house despite repeated request from the Maoists.

'Several Maoists were captured and handed over to security forces. Some of them were killed while others were brutally beaten. So there was a situation of animosity,' he said. 'However, it isn"t appropriate to scratch old wounds by any side because we have come this far based on the peace process.'

He smelt a rat behind the timing of raising such an old case at the time when the CPN-UML has emerged as the largest party from the local elections.

ROLPA, July 10: Some victims of the decade-long Maoist insurgency have complained of injustice in distribution of compensation. Conflict victims in... Read More...