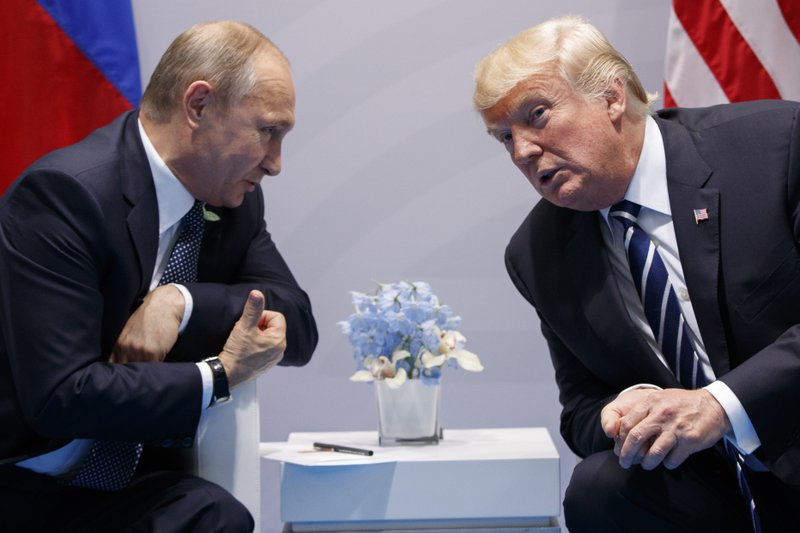 HAMBURG, July 8: Fresh from his lengthy head-to-head encounter with Russian President Vladimir Putin, U.S. President Donald Trump on Saturday was meeting with a long list of world leaders, including British Prime Minister Theresa May and President Xi Jinping of China, as he wraps up his second trip abroad.

Trump said he had a “tremendous meeting” with Putin as he sat alongside May for a morning exchange on the sidelines of an international summit in Germany. It marked Trump’s first comments on his high-profile talks with Putin in which he raised the issue of Russia’s meddling in the 2016 elections and discussed plans for a ceasefire agreement in Syria.

Trump was expected to focus on talks to counter North Korea’s push for ballistic missile and nuclear programs, address international trade and ways to combat terrorism. The president was holding the meetings at the annual Group of 20 meetings, which have been marked by violent riots in the city between anti-globalization activists and police.

Noting his “special relationship” with the British prime minister, the president said he and May were working on a trade agreement that he described as a “very, very big deal, very powerful, great deal for both countries.”

May was the first foreign leader to visit Trump at the White House and he told her he would soon “be going to London” once details were worked out. Independent trade negotiations between the two countries are a possibility as Britain exists the European Union — a move Trump has supported.

During his brief remarks, Trump lauded his daughter’s efforts to help female entrepreneurs, joking that “if she weren’t my daughter, it would be so much easier for her.”

Trump planned to return to Washington on Saturday evening after the conclusion of the annual Group of 20 meetings. He won’t be stateside for long. The president is scheduled to return to Europe next week to attend Bastille Day celebrations in Paris.

The European trip to Poland and Germany has centered around the exchange with Putin, Trump’s first in-person meeting as president. But both sides offered differing explanations of what took place.

U.S. Secretary of State Rex Tillerson said Trump and Putin had a “robust and lengthy” discussion about the election interference but Putin denied any involvement. His Russian counterpart, Foreign Minister Sergey Lavrov, said Trump had accepted Putin’s assurances that Russia didn’t meddle in the U.S. election — a characterization that the U.S. disputed.

“I think the president is rightly focused on how do we move forward from something that may be an intractable disagreement at this point,” said Tillerson, who took part in the meeting along with Lavrov.

Democrats seized upon Tillerson’s remarks, saying that it was wrong to suggest the issue of Russia’s role in the election meddling was unresolved. Senate Democratic leader Chuck Schumer of New York said it was “disgraceful” and said it was a “grave dereliction of duty” to give “equal credence to the findings of the American Intelligence Community and the assertion by Mr. Putin.”

U.S. officials have said Russia tried to hack election systems in 21 states and sway the election for Trump, representing a level of interference in the U.S. political system that security experts said represents a top-level threat.

Trump’s meeting with Putin, which was originally scheduled for 35 minutes, wrapped up after more than 2 hours, and focused heavily on a just-announced ceasefire deal for southwestern Syria that was reached by Russia and the United States.

While the U.S. and Russia have held conflicting views on Syria in the past, Tillerson said Russia had an interest in seeing the Mideast nation become a stable place.

Tillerson said details about the ceasefire still need to be worked out, but Lavrov told reporters that Russian military police will monitor the ceasefire, with a monitoring center set up in Jordan — another party to the deal.

Both the Russians and the Americans took pains to describe the meeting as “constructive,” cordial and wide-ranging, covering key topics including cyber security and North Korea.

7 contractors including Pappu Construction in govt blacklist
14 hours ago

I resigned on moral grounds: Gokul Baskota
6 hours ago