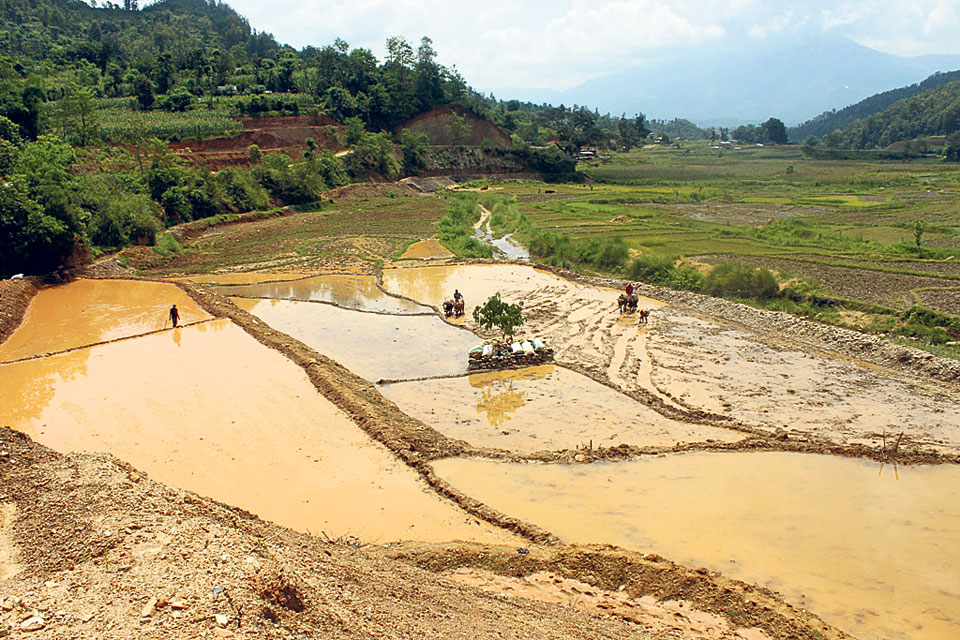 “Seedlings are ready for transplantation. Many farmers have already started plantation.
Plantation will be done in all fields in time this year if irrigation canal is not damaged by landslides,” Magar added.

The repair of irrigation canal, which was damaged by the earthquakes of 2015, has brought cheers on the face of local farmers. Irrigation Division Office, Gorkha, completed repair works of Pokharatar Irrigation Project with an investment of Rs 20 million. The project irrigates 30 hectares of land in the village.

This year the division office repaired seven irrigation canals investing a total of Rs 70 million. The canal at Nibelphant has been repaired with an investment of Rs 559,000. It irrigates 25 hectares of land. Water of the canal has also been supplied to fisheries started by local farmers.

Though the division office invested Rs 5 million to repair Kalleri Irrigation Project in Shahid Lakhan Rural Municipality-3, only a few farmers are benefiting from the project. It is because some farmers near the head of the canal are controlling water flow on their will, claiming their ownership in the project.

“This has forced farmers, who are into commercial farming, to lift water from Daraundi River to irrigate their fields,” Junga Bahadur Thapa, a farmer, told Republica.

According to the office, maintenance of some irrigation canals has been delayed because
of indifference shown by farmers. “As farmers are not showing much interest in maintenance of canal, the irrigation office has to make huge investment every year,” Dhan Prasad Aryal, president of a local consumers' committee, said.

SIRAHA, April 1: What a farmer really wants is better irrigation for his land. For Mukti Lal Singh, 55, of Bandipur,... Read More...