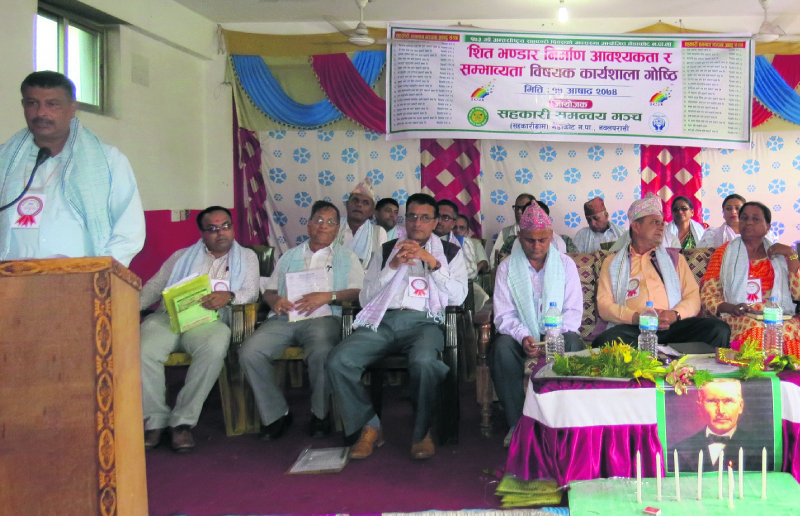 CHITWAN, July 4: Different cooperatives based in Gaidakot of Nawalparasi have taken initiated to open a cold storage warehouse in the area.

The held a discussion on the issue amid a program organized by Cooperative Coordination Network (CCN) on the occasion of 173rd cooperative day recently.

“Cold storage facilities are necessary as they help farmers fetch good price for their produce. The Gaidakot Municipality will provide needful support and cooperation if there is possibility of opening such facility here,” Chhatra Raj Poudel, the mayor of Gaidakot Municipality, said at the program. “Establishment of cold storage facility will be a good beginning as the municipality has set a target of achieving prosperity through agricultural development,” he added.

Jabahar Lal Pradhan, who has been operating a privately-owned cold storage facility since 1986, said operating a cold storage does not seem as easy as it looks. “You need to make farmers aware of the benefits of storing their produce in the cold storage,” he said.

Pradhan said he ventured into the business realizing that cold storage facility helps farmers to get good price.

Speaking at the program, Khem Raj Sapkota, board director of National Cooperative Development Board (NCDB), said the initiative taken by local cooperatives to build a cold storage facility is praiseworthy as it encourages farmers to increase production.

NUWAKOT, June 5: The process of constructing a fuel storage facility in Nuwakot has kicked off. Land has already been determined... Read More...

Nepse yet to prepare working procedure for margin trading facility

KATHMANDU, Dec 18: Brokerage firms have not been able to start margin trading facility because of the delay in issuance of... Read More...

KOHALPUR, Oct 31: The storage capacity for milk in Nepalgunj is insufficient to receive all milk produced in the far-western and... Read More...