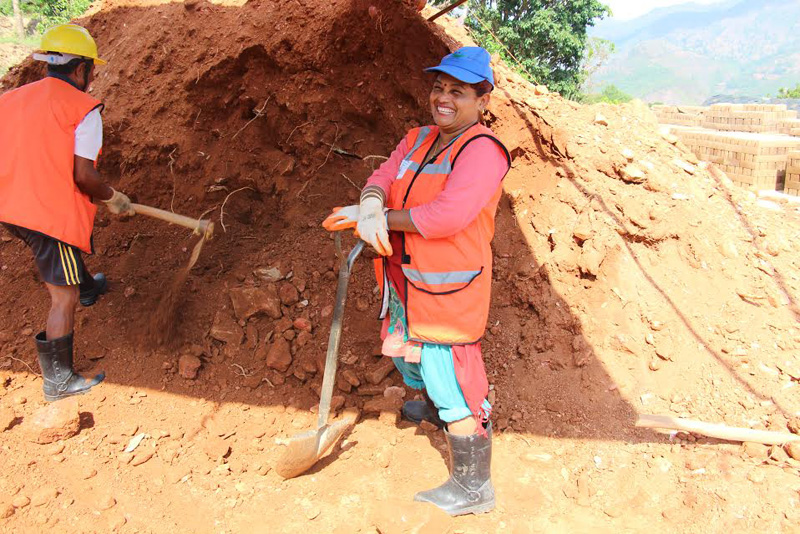 Women are praised for creating life but never encouraged to build something for the future
Hira Bishwakarma, 30, of Siddhalekh Gaunpalika, was busy doing household chores when she got a confirmation call of the job as Construction/Production Team Leader at one of the renowned NGOs in Dhading. With no college degree or any skill/training she had little hope for selection. “I saw only four women, including me, at the interview. There were almost 30 people in all. I wondered why I was even shortlisted. I ate and slept a bit more the day I got that call”.

Bishwakarma has been working in the local Brick Production Facility Center for almost three months now along with two other female Construction/Production Team Leaders of the same village. Like her family members she had her doubts before joining as she would be surrounded by rough and tough looking male workers. “To my surprise they are all very respectful and helped me and other women with heavy lifting. They call us ma’am/madam and are conscious with the use of language around us. I feel that vulgarity and the use of swear words—which I was warned against—has been relatively rare.”

“It was a bit awkward working with 12 male workers for the first few days but now it’s normal and even rewarding at times,” says other female worker Bishnu Maya Baram, 40.
After her husband passed away three years ago, Baram has five children to look after. “One of my kids was born with physical disability and I was doing every available work to earn extra to pay their school fees. But I never saw any possibility of working in construction.”

Another worker Sharmila Timilsina, 35, was known as the wife of a local Nepali Congress leader —until now. These days she leaves for work at 9 am wearing her work cap and jacket and reaches home at 6 pm, her clothes all dirty and dusty from the long day of work. Villagers recognize her as the woman who works at Brick Production Facility Center. “This is my first real job and it feels good when the supervisor calls me by my name.”

These newly hired female workers have brought positive impact in the village. As they add to family income, they feel more confident. From their collective experience they say, “Our friends, neighbors and relatives are excited to hear about our work and even ask us to inform them if such vacancy opens up again.”

Women empowerment has been a much talked issue in recent days. However, construction/production work is still considered as a no-go zone for women given the physical and cultural barriers to their entry. Not only in remote parts of the country but also in city areas women are discouraged from working in construction and are asked to have other career options, just in case.

According to the Information Officer of Hosing Recovery and Reconstruction Platform Nepal, Chadrakant Karna, female participation in mason training is minimal. “The females of the villages do not feel comfortable receiving mason training because of the long commute, safety issues and limited time they get from doing household chores and taking care of the kids and cattle all day.” Out of 5,200 participants in the training in 2017, only 300-400 were women. Similarly, the recent 51-round mason training provided by the National Society for Earthquake Technology-Nepal at Nalangpatle consisted of 1,554 males and only 49 females. The negligible female participation in construction again goes back to our patriarchal norms and values.

Women are praised for creating life but never encouraged from building something for the future. As kids everyone plays in mud and rain but girls are criticized more if they come back home with dirty dress. Indoor games are thought of as more suited for girls whereas outdoor sports are male territory. This bias is not genetic; it is rather a product of our culture. For all we know, we are missing out on what talented women have to offer at our construction sites.

Gender diversity is the last thing one can expect at construction sites. Even in developed countries, 99 percent construction workers are males. Women who want in have to prepare themselves to work in a male-dominated field. The work environment is challenging to both men and women, as men too have little or no experience of working with females.

Civil engineer Sangeeta Shrestha, 25, shares her experience of being one of only five female students in civil engineering, among 98 students in her college. She remembers how her family was concerned about her safety and future hardships. “My family supported my decision to be a civil engineer but they were worried all the time when I got any project in a remote area.”

Sexist remarks didn’t bother Shrestha early in her career but she had her share of issues with contractors and even laborers. “They used to address male engineers with ‘sir’ and me as baini (sister). They even used double meaning sentences when I was around.”

Shrestha remembers how she changed the minds of male laborers at Sindhupalchowk who refused to work with female workers who were being given equal pay. “They were convinced only after I oriented them on the NGO protocol.” Shrestha still gets surprised looks not only at construction sites but also at high level meetings when she introduces herself as an engineer.

The author is communications officer at Ecological Protection Forum Nepal

Coronavirus insurance claims worth Rs 11.5 billion yet to be settled
20 hours ago
99 Nepali workers set out for Israel; labor minister, ambassador reach TIA to see them off
26 minutes ago