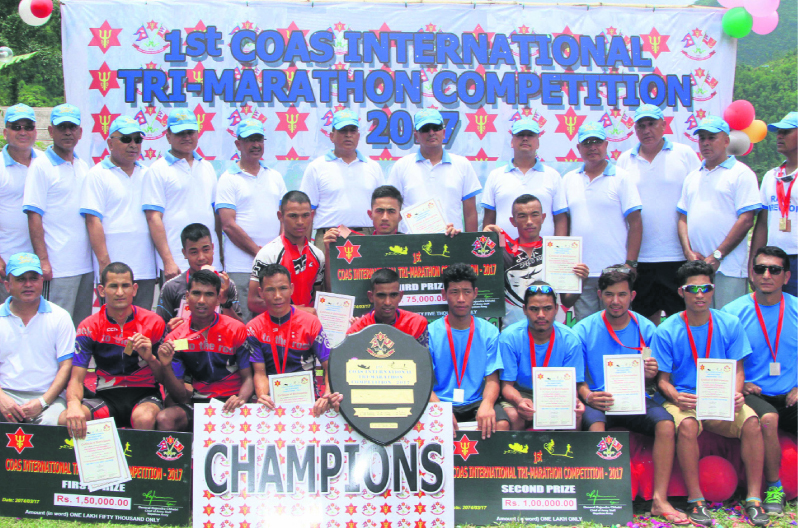 KATHMANDU, July 1: Tribhuvan Army Club 'A' lifted the title of First CoAS International Tri-Marathon Competition - 2017 defeating the likes of Reaper Marines and Vipers Team of the United States on Saturday in the annual tournament held along the Trishuli River in Dhading district.

This is the fourth successive title haul by Nepal Army's team while it was the first time the armed force teams of foreign countires participated in the competiton.

The winning team completed a distance of 43.7 kilometers in 2 hours 18 minutes and 01 seconds. The course was divided into three stages - running (6.7 km), cycling (26 km) and rafting (11 km). The starting point of the race was Baireni while the end pont was Charaundi along the bank of the Trishuli River.

Altogether 12 teams had participated in the event including 8 teams from Nepal and four foreign teams. The foreign teams participating in the competition were Armed Forces Team of Bangladesh, British Gurkha Team from the UK and Reaper Marines and Vipers Team of the USA.

The Himalayan Girls became the first girls' team to take part in the event.

Acting army chief Lieutenant General Baldev Raj Mahat and Lt. Gen Purna Chandra Thapa distributed the prizes in the absence of Chief of Army Staff General Rajendra Chhetri, who is in a visit to the UK and the USA.

Issuing a press statement on Saturday, the Directorate of Public Relations of Nepal Army said it has been organizing various national and international competitions with a view to help Nepali athletes maintain high standards during international tournaments.

”We believe that this type of adventure sports will also help in promoting internal and foreign tourism in Nepal,” said the press statement.