Manang brimming with tourists even in off-season 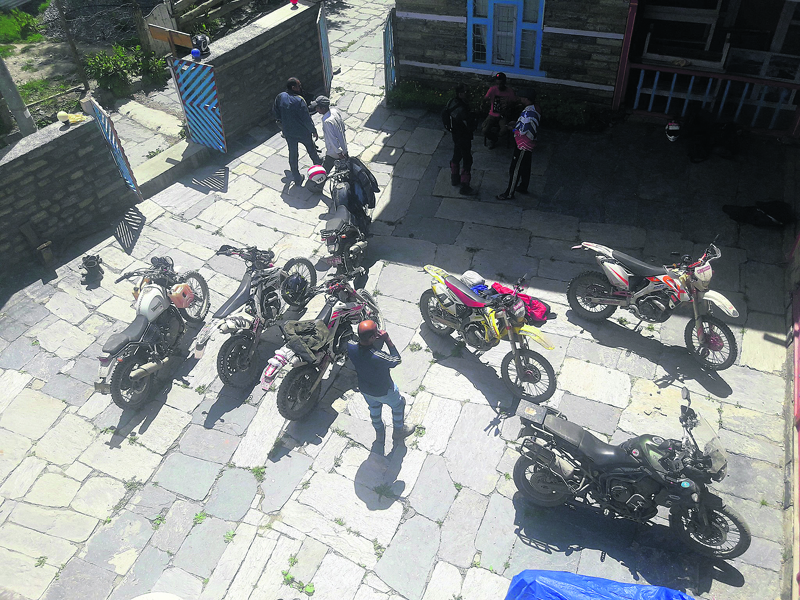 POKHARA, June 29: Monsoon is considered an off-season for trekking. Until few years ago, hotels in Manang along the popular Annapurna Circuit trek used to get very less clients during monsoon. With low tourist traffic, hoteliers also used to engage in farming and other household works.

But things have changed now. Manang is brimming with domestic tourists even though monsoon has already begun.

According to local hoteliers, road access is one of the reasons that has made Manang livelier even during off-season. Hotelier Binod Gurung said that Manang has seen huge traffic of domestic tourist this year. “Earlier, hotels in Manang used to wear a deserted look during monsoon. This year hotels and restaurants are full. This is mainly due to road connectivity,” he added.

Local hoteliers say Nepali youths come in large numbers in motorbikes or private cars. The number of Indian and foreign tourists has also increased this year compared to last year.

According to locals, Khangsar, which is the gateway to Lake Tilicho (4,919m), is now connected to road network via Upper Manang. From Khangsar, one can reach to Tilicho Base Camp after a trek of only five hours. From there, Tilicho Lake is only two hours' walk away. Upper Manang was connected to road network two years ago. Since then, number of tourists visiting the place has increased considerably.

Babulal Tiwari, the project chief of Annapurna Conservation Area Project (ACAP) in Manang, said that Manang is getting tourists round the year. “It was difficult to find tourists in Manang during off-season before roads were built. Road connectivity has increased business of locals,” he added. “Even during off season, Manang is getting around 15 foreign tourists every day.”

Locals say September-November and March-April is considered the peak season for tourism activities in Manang. During this time, it is difficult to find hotel rooms in Manang.
Surya Thapaliya, the chief of Pokhara office of Nepal Tourism Board (NTB), said Manang is attracting tourists in droves. “People are visiting dry places during monsoon,” he added.

MANANG, Oct 11: A total of 82 tourists- domestic and foreign combined- stranded in Manang, a mountainous district, due to... Read More...

POKHARA, Oct 20: Tourist destinations of the Annapurna area including Ghandruk have decided to not operate hotels for an indefinite... Read More...

Domestic tourists visiting Manang make most out of Dashain break

MANANG, Oct 7: The number of domestic tourists visiting the trans-Himalayan district, Manang, has increased this Dashain.  The mountainous district was... Read More...

Agitating IOM students stage sixth round of protest against Dean (Photo Feature)
12 minutes ago
If you want to seek your property share, go to Baluwatar: MP Agrahari
22 minutes ago

Fugitive arrested from his house in Jumla
59 minutes ago