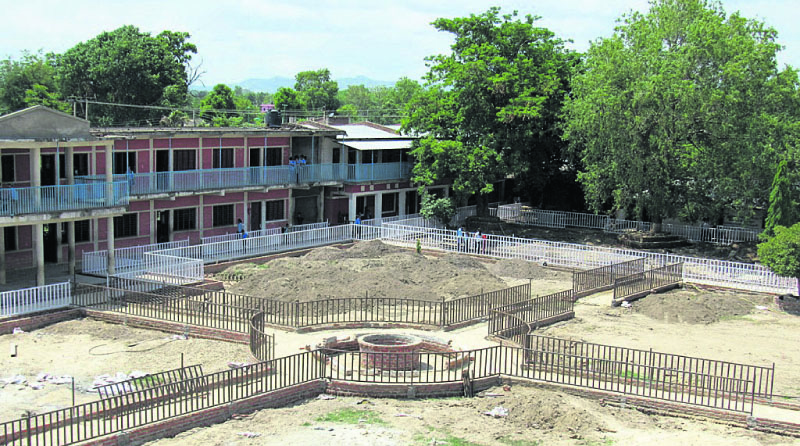 MAHOTTARI, June 24: A school in Bardibas has set a perfect example of the age-old adage - where there is a will there is a way. Janata Higher Secondary School (JSS) of Bardibas, Mahottari has proved that the school does not require government budget if the people are willing to invest for the development of infrastructure.

Since a few days, this school has started construction to develop child- friendly infrastructures with the support of the people.

Every year, the government offers budget to various community schools for the construction of physical infrastructures but that budget is never been properly utilized. The budget allocated for the welfare of students has always been misused by the concerned stakeholders. Sometimes, the budget gets freezed due to unnecessary political controversies and disputes. Despite all of these challenges, JSS has started the construction much to the delight of the students and parents.

There are very few schools in Mahottari district. It is hard to find schools with proper infrastructure. There are several cases of irregularities and misdeeds in the community schools of the district. In every four months, government sends salaries for the teachers through Department of Education. But no budget is sanctioned for building child-friendly infrastructures. Even if it did, that amount is never enough for the development of the schools. Despite that, the Ministry of Education expects community schools to conduct child-friendly educational activities. Many schools of Mahottari have not been able to live up to the expectations of the ministry due to irregularities, lack of budget and politicking.

Amidst such a backdrop, JSS has raised a lot of eyebrows by daring to create child-friendly environment in the school on its own. The school is conducting a campaign at local level in order to raise funds for the welfare of students. With the support from students, parents, school management committee, teachers, and education lovers, the school has commenced the construction work. It is expected that the whole construction will cost around Rs 4.8 million but as of now the school has begun the work with Rs 1 million. This commendable plan has gained a wide recognition in the district.

As informed by Dev Narayan Mahato, chairperson of the School Management Committee of JSS, the school has received good financial support and encouragement from the public.

“Government provides some help in creating child-friendly classrooms but only for nursery class,” said chairperson Mahato, adding, “But that is not enough as there are other students as well and we need to think about them too.” He further informed that the whole school is excited about the plan. “Students will receive all facilities which are available in reputed schools of the cities. They can have clean drinking water, big playgrounds and many other facilities,” shared Mahato.

As per the plan, garden railings will be built in both sides of the 5 meter-wide road of the school. Besides that, a children's park, a fountain, a stage for cultural programs, a parking station, a drinking water stand, information centre, child wall magazine, a library and a computer class will be built.

After the completion of the infrastructures, JSS will be declared as the first child-friendly school of tarai, informed the school authority. By now, the locals have donated around Rs 500,000 and various construction materials for the school, informed Dilip Tiwari, principal of JSS. “We had aimed to complete the work within July 15 and fortunately 80% work has been completed by now,” said Tiwari.

JSS, which was established in 2059 BS, runs classes from nursery to grade 12. Sushil Kumar Yadav, Information officer of the school said that the school currently has around 1,000 students and most of them are from poor and marginalized communities. According to him, more than 90 percent of the students belong to Musahar, Kami, Damai, Pariyar, Bishwokarma, Sarki, Mochi, Baitha and other marginalized communities.

Dhurmus-Suntali Foundation has provided technical assistance to this project. “After the completion of the project, it will be easier for us to provide quality education to the students who will later sell and promote their skills and talents in the international market,” said Shankar Mahato, a member of the School Management Committee.

Many students used to join schools and later opt to drop out due to lack of child-friendly environment. “We were very much inspired by the contribution of Dhurmus-Suntali Foundation for the Musahar community,” said Gopi Krishna Bhattarai, coordinator of Parent-Teacher Association of the school. “We want the children of the marginalized communities to step into the competitive world and showcase their talents and for that quality education is a must,” Bhattarai added. The school authority has appealed to various people to support then in the project.

KANCHANPUR, Oct 30: Locals along with Germany volunteers have joined their hands for the construction of a building of Siddha... Read More...

MAHOTTARI, August 3: Locals of Gaushala in the district have come together to build a child-friendly school building. ... Read More...