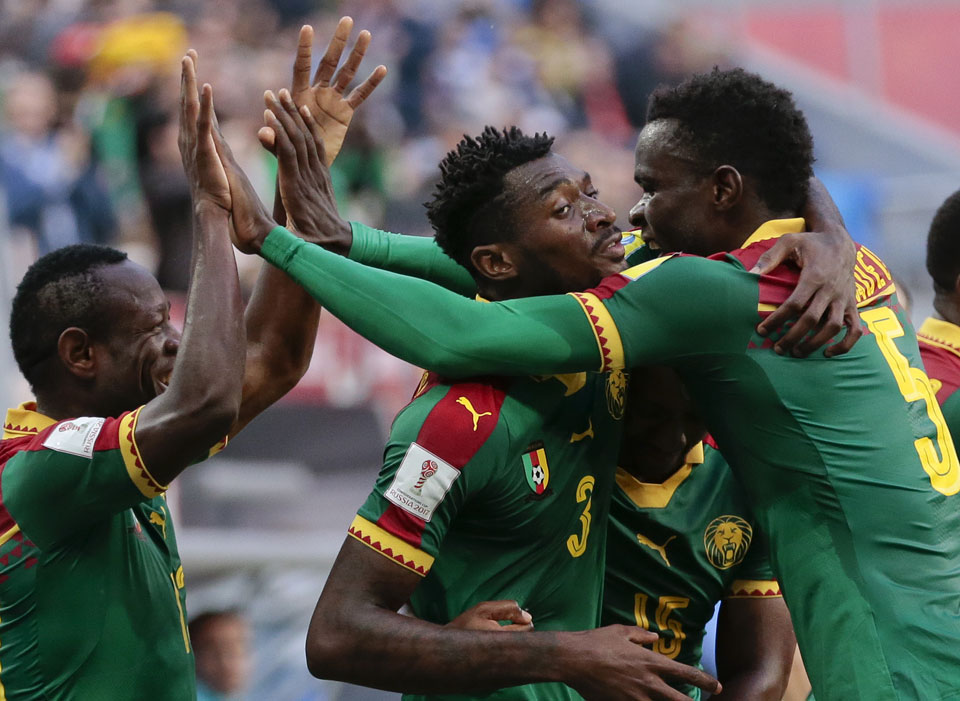 ST PETERSBURG, June 23: The forward whose title-winning goal carried Cameroon to the Confederations Cup couldn't find one Thursday when the African champion needed him again.

Cameroon was creative but wasteful in a 1-1 draw with Australia that left both teams facing early exits.

The result extended a winless run at FIFA tournaments for two teams that each lost their opening game in Russia and all three matches at the 2014 World Cup in Brazil.

Had Vincent Aboubakar struck with one of his seven goal attempts — more than the entire Australia team combined — Cameroon could have faced Germany on Sunday with more confidence.

After Germany also drew 1-1 Thursday, against Chile in the later match, Cameroon must beat the world champion to hope to advance to the semifinals on the goal difference tiebreaker. Chile and Germany are on four points, Cameroon and Australia each has one.

"This is the life of a front player," said Cameroon coach Hugo Broos, whose team is in Russia because Aboubakar scored an 88th-minute goal against Egypt to clinch the African title in February.

"Sometimes you score the goals with your eyes closed and sometimes you miss chances that you can't miss. It is a pity for us that it happens today," Broos said.

Aboubakar declined to answer questions when walking through the stadium's post-match media zone.

The 25-year-old Porto player has a proven international record for Cameroon with 16 goals in 57 matches.

Still, he should have added to that total in the 57th minute at St. Petersburg stadium. Teed up with a clear shooting chance from eight yards (meters), Aboubakar slipped as he slid the ball wide of the net.

Aboubakar later got into excellent positions beyond the Australia defense, but fired too high with a right-foot shot and then a glancing header.

His day's work — seven goal attempts, none on target — prompted a Cameroonian reporter at the coaches' news conference to ask Broos if he was still looking for new forwards.

"We are searching," Broos insisted, three times, in French. "And we continue to search, but you have to find the striker who is going to score goals. If you have one, please tell me his name and I will go directly and see him."

The 21-year-old midfielder ran deep to collect a lofted long ball that overshot Aboubakar, and showed awareness to lift the ball gently over goalkeeper Mat Ryan.

The goal was loudly cheered by Russian fans in a 35,021 crowd who later led chants of "Cam-ay-roon" trying to help lift the Africans to victory.

"They like the way we are playing," Broos said of Russia's support. "They like the team on the pitch who is fighting for every ball and playing good football."

Australia fought with a physical edge to its game, and leveled from the penalty spot in the 60th. The decision to penalize a trip on wing-back Alex Gersbach was confirmed by a video review shown on the stadium screens.

Australia coach Ange Postecoglou lamented another lapse in defense after conceding untimely goals in an opening 3-2 loss against Germany.

"We probably just relaxed for a moment, and you get punished at this level," Postecoglou said.

However, it was Aboubakar letting Australia off the hook.

FM Mahat off to Australia