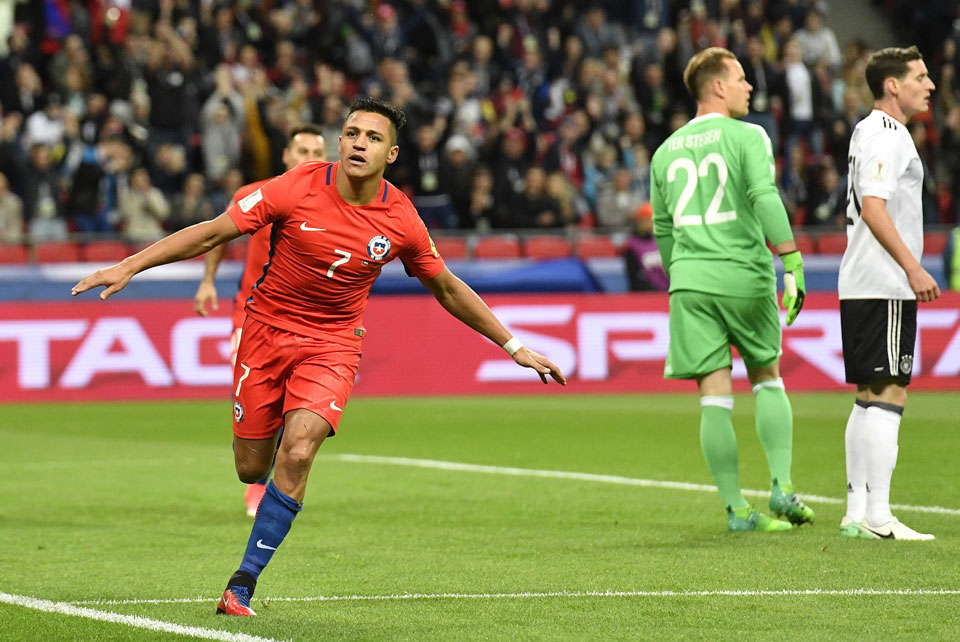 KAZAN, June 23: Alexis Sanchez became Chile's all-time leading scorer as they were held by Germany to 1-1 in the Confederations Cup on Thursday. Both teams were in a good position to make the semifinals.

Sanchez netted his 38th goal for Chile after a smart pass by Arturo Vidal in the sixth minute. The ball hit the near post before crossing the line to allow him to eclipse Marcelo Salas as the highest scorer for the national team.

"It makes me very happy to have become the team's greatest scorer," Sanchez said. "I'm happy for what the team has done, for our effort. We are confident that we can win this tournament."

Suffering from an ankle sprain, Sanchez did not start the first game of the pre-World Cup tournament, playing only a few minutes in the win over Cameroon.

Germany, with only three players from its 2014 World Cup-winning team, played catch-up most of time against the more experienced Chileans, but earned the draw after Lars Stindl scored from close range in a counterattack just before halftime.

The result left both teams with four points each in Group B, three more than Australia and Cameroon, which played out a 1-1 draw hours earlier in St. Petersburg.

"I saw a very intense match, marked by very strategical play," Joachim Loew said after missing out on his 100th victory as Germany coach. "The key was to have a very well-structured defensive line. Given this young and inexperienced team, we played at a very high level."

Chile coach Juan Antonio Pizzi agreed on it being a very technical game.

Chile, trying to win its first major international tournament after winning consecutive Copa Americas, was in control for most of the match in front of 38,222 fans at Kazan Arena, holding on to possession and creating chances with Sanchez and Eduardo Vargas up front.

Germany improved toward the end, grabbing control of the middle of the pitch, but neither team was able to create many significant chances to break the deadlock.

Chile opened the scoring after a pass by Germany defender Shkodran Mustafi was intercepted by Sanchez near the box. Arturo Vidal picked up the ball and quickly sent it back to Sanchez. The ball hit the near post before crossing the line as Germany goalkeeper Marc-Andre ter Stegen could only watch.

Germany, with a lineup slightly changed from the opening win against Australia, equalized in the 41st after Jonas Hector deceived the defense on the left side of the area and made a well-timed cross for Stindl's close-range goal.

Vargas, who has 34 goals for Chile, almost added to the lead in the first half with a powerful shot that struck the crossbar.

Sanchez came close to scoring his second a few minutes later with a low left-foot shot that required a difficult save by Ter Stegen.

Chile was still without regular starting goalkeeper Claudio Bravo because of a calf injury.

CYC to U-18 quarterfinals, Manang held by Far-west

Pregnant woman rescued by helicopter in Doti
27 minutes ago

I am focused on parliamentary party elections: Gagan Thapa
54 minutes ago