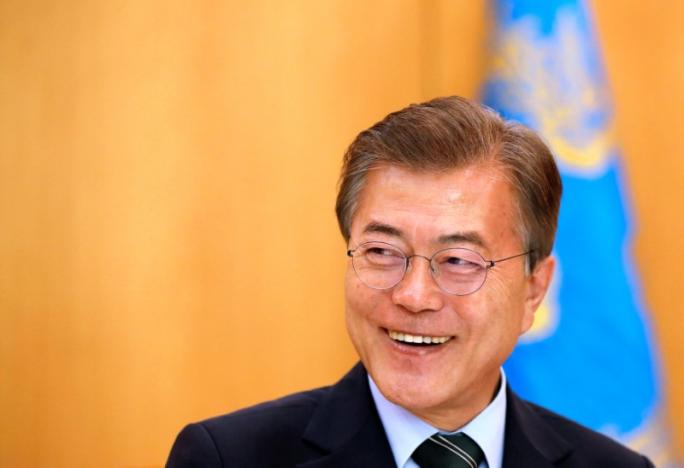 SEOUL, June 22: South Korean President Moon Jae-in said on Thursday China should do more to rein in North Korea's nuclear program and he would call on President Xi Jinping to 'lift all measures' against South Korean companies taken in retaliation against Seoul's decision to host a U.S. anti-missile defense system.

In an interview with Reuters ahead of his trip to Washington next week for a summit with U.S. President Donald Trump, Moon said 'strong' sanctions should be imposed if North Korea tests an intercontinental ballistic missile (ICBM) or conducts a sixth nuclear test.

North Korea will acquire the technology to deploy a nuclear-tipped ballistic missile capable of hitting the mainland United States "in the not too distant future," Moon said.

"I believe China is making efforts to stop North Korea from making additional provocations, yet there are no tangible results as of yet," Moon told Reuters at the sprawling Blue House presidential compound.

"China is North Korea’s only ally and China is the country that provides the most economic assistance to North Korea," Moon said. "Without the assistance of China, sanctions won't be effective at all."

His comments echoed that of Trump's who said in tweet earlier this week China's efforts to use its leverage with Pyongyang had failed.

Moon was elected in May pledging to take a more moderate approach to the North and engage the reclusive country in dialogue, in addition to pressure and sanctions to impede its defiant pursuit of nuclear weapons and ballistic missiles.

But the move has angered China, which says the system's powerful radar will look deep into its territory and undermine regional security. China has pressured South Korean businesses via boycotts and bans, such as ending Chinese group tours to South Korea and closing most of South Korean conglomerate Lotte Group's Lotte Mart retail stores in China.

Moon said he hopes to hold talks with Xi at the G20 summit in Hamburg, Germany next month, and will urge him to take steps to ease measures against South Korean companies.

"If I have the chance to meet President Xi, I will ask for him to lift all of these measures," Moon said. "This is the agenda that we cannot evade."

Moon said he wants to sit down with as many world leaders as possible in Hamburg -- including Xi, Japanese Prime Minister Shinzo Abe and Russian President Vladimir Putin -- where he expects the North's nuclear program will top the agenda.

Japan is an important partner in the effort to resolve the North Korean crisis but Tokyo's refusal to fully own up to its wartime past as well as its growing military spending are concerning, Moon said.

"If Japan were to show its strong resolve in looking back on its past history and sending a message that such actions will never happen again... then I believe that this will go a long way in further developing its relations with not only Korea but also with many other Asian nations," he said.

Moon has said many South Koreans did not accept a deal reached by his conservative predecessor and Japan's Abe in 2015 to resolve the issue of Korean "comfort women" -- a euphemism for women forced to work in the Japanese military's wartime brothels.

Moon said he has "high expectations" for the upcoming summit with Trump next week and said the priority the two leaders have placed on North Korea has raised the possibility that the nuclear issue will be resolved.

"I'm very glad that President Trump has made the resolution of North Korea's nuclear issue as top of his priority list on his foreign affairs agenda."