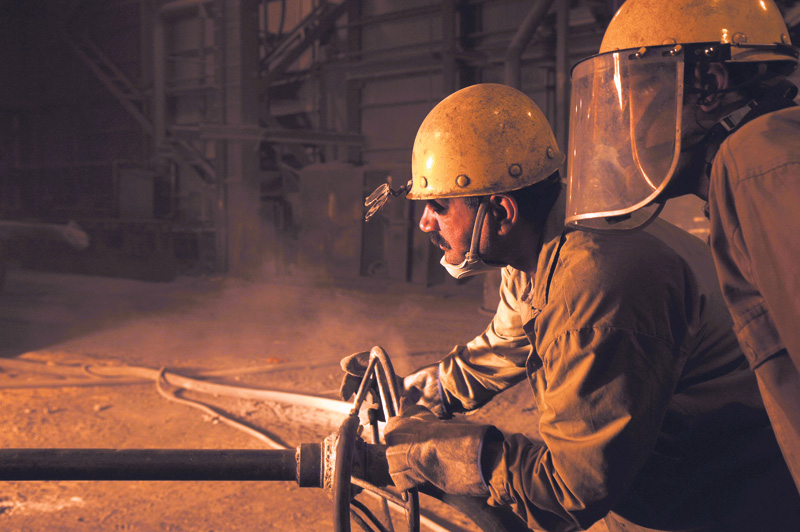 Nepali workers receive lower pay for work of equal value in comparison to workers from other countries
The Department of Foreign Employment under the Ministry of Labor and Employment reports foreign employment as the most significant motivation for international migration from Nepal in the past decade—over 3.8 million work permits were issued by the government between 1993/94 and 2014/15.

While most Nepali migrant workers leave their homes in the hope of landing well-paying jobs and better life abroad, many find themselves enmeshed in appalling work conditions upon their arrival in destination countries. Contrary to the lucrative promises made by third party agents back home, they end up working extremely long hours, often in unsanitary and hazardous conditions, and without proper contracts. More often than not, they receive little or no compensation for working overtime and are restricted from taking breaks and leaves.

While this is the reality for workers in all sectors—domestic, industrial, agricultural, etc—it rings true especially in case of domestic workers. They are particularly vulnerable to abuse owing to their status as live-in ‘servants’ hired by individuals in private, outside the ambit of law. Often, such workers are barred from any social contact outside the house and from communicating with their families back home. They have no access to phones or internet and are not allowed to engage in any recreational activities.

In many cases, migrant workers are unable to terminate their employment and change employers or return home of their own will, as their passports and other identifying documents are withheld. They are also barred from joining trade unions and engaging in collective bargaining and exercising other labor rights. Even when they find a way out and come back home, they are not given the money worth their labor and are inundated with debt—many migrants take out loans at high interest so that they can buy air tickets and pay the fees for expensive private agents and recruitment companies.

Another matter for concern is racial and nationality based discrimination. Nepali migrant workers reportedly receive lower pay for work of equal value in comparison to workers from other countries.

There is a plethora of civil society organizations and scholars working to raise awareness about issues like sex trade and trafficking, primarily that of women. There is extensive campaigning and concern for stringent laws and effective enforcement and monitoring mechanisms to combat sex trafficking. However, discussions relating to migrant workers, both male and female, have been largely generic and have failed to offer specific and practical interventions. Freedom from forced labor is a fundamental right enshrined in many international human rights treaties and labor standards. National laws of most countries also prohibit forced labor and outline the required minimum standards on matters like wage, working hours, workplace safety, etc.

What next?
That remittance is pivotal to Nepal’s economy is uncontested. Nepal received a staggering Rs 589.5 billion, or 27.7 percent of GDP, in remittances in 2014/15. Nepali workers were sending money from Malaysia and Middle Eastern countries like Qatar, the UAE and Saudi Arabia, the major labor destination countries. We are also aware that our workers constitute a significant part of the workforce in these countries. Why then have we been unable to deal with the abuse and mistreatment of our migrant workers?

We need policies and programs that help migrant workers cope better in destination countries. We must revise existing bilateral treaties and agreements with destination countries and negotiate new ones to protect the rights of our emigrant workers. Effective complaint and reporting mechanisms should be established whereby migrant workers can report back home and seek intervention for rescue, repatriation and compensation. Along with better skills training and education, cultural sensitization and increased awareness of labor rights, there is also a need to increase the economic potential and competitive advantage of our migrant workers. This will allow and encourage them to come back home with better skills and capital which they can then reinvest in their own country, thereby advancing the country’s economic and overall development.

Although effective implementation of such practices may be easier said than done, there is much to learn from other countries. The Philippines, for instance, has institutionalized labor migration to reap maximum developmental benefits and to achieve higher welfare of migrant workers and their families. Through its control of labor migration, the country facilitates migration, regulates operations of recruitment agencies and looks out for the rights of its migrant workers. In addition to having effective tracking and follow up mechanisms, the Philippines has set up training centers and consular offices to which its workers can report in major destination countries.

Nepal also needs a robust complaint and communication mechanism in the destination countries. We cannot turn a blind eye to the fact that the majority of our workers are now outward-bound. We must, instead, accept this reality by better institutionalizing labor migration. Along with effective management of labor migration and improvement in protection standards of migrant workers, such institutionalization would also help curb illegal emigration channels that make laborers vulnerable to exploitation and abuse.

The author is pursuing an LLM in International Human Rights Law from Lund University, Sweden

Taking advantage of open border, India pushed Bhutanese Nepalis into Nepal, which was itself in dire need of international support... Read More...