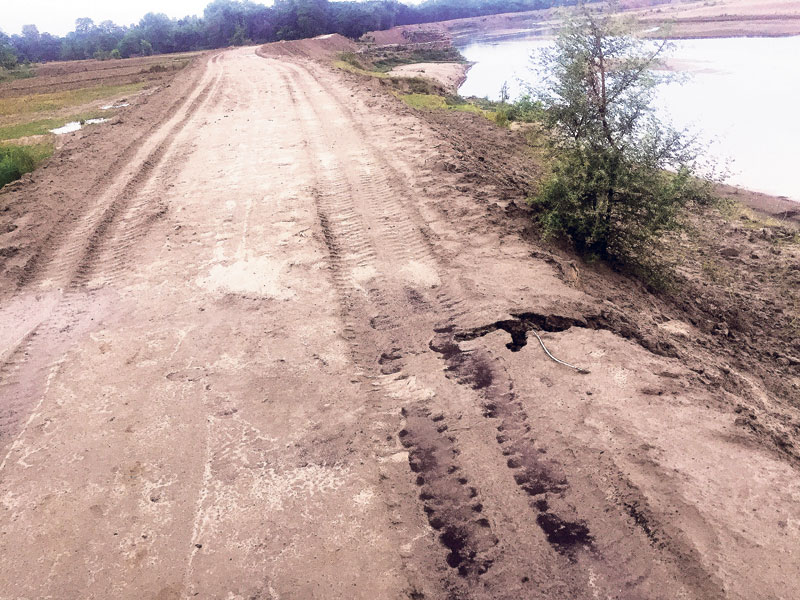 Cracks are visible on an embankment built along the Babai River near Gulariya, Bardiya in this recent picture.

BARDIYA, June 13: The embankment constructed by the government along the Babai River near the Gulariya market has started eroding. Visible cracks on the embankment have triggered panic among the locals so much that they fear that a devastating flood is coming their way during the monsoon season this year.

Residents said that huge quantity of sand, instead of mud was used for constructing embankment. Sand is easily washed away and the structure cannot stand monsoon, they informed. “Half of the embankment is already washed away by the river. Cracks are visible through out the embankment. It has given away because it is made of sand rather than mud. This embankment wont stand against a single rain, let alone the whole monsoon,” said Radheshyam Tharu, a local of Gulariya.

“This embankment was made to prevent the flood entering into our settlements. But its standard is far below than what it should be. If I am correct, it"s worth millions of rupees.  See, what they have made by spending that amount. And above all, despite such poor construction, I wonder why is the monitoring department silent,” he questioned.

Every year the government allocates substantial budget for building embankments. Tharu said that contractors erect one or the other embankment around Babai River almost every year. However, this has not helped people at all, he said. “They never make it properly. It is made to control the flow of the river. But it never does so. Why would the contractors work sincerely when concerned officials are not going to question them?” he asserted adding that despite their protests year after year, their voices have been never addressed by the concerned authorities.

Apart from this embankment, another two embankments were constructed near Rampur and Prayagpur area this year. But condition of those embankments is also the same. Locals state that all such works are done for namesake. Negligence of the contractors and government officials, residents in the area state, has put their life and belongings at risk.

“Even we know that the contractors are supposed to bring mud and stones from other areas to construct the embankments. But they never brought anything from outside. All of us are aware of these wrongdoings of the contractors, but when the official monitoring body is mute, we are bound to suffer,” he added.

A monitoring team of the government had recently organized press meet to share information about the embankments made along the river. During the meeting attended also by several party leaders, contractors and concerned officials were drawn attention to the issue by the locals. However, these were dismissed, locals say.

“Making of embankment has in fact been an annual source of income for contractors. So, they never want to work effectively,” alleged Tharu.

Dhruba Pokharel, chief at the DWIDM, Bardiya denied the charges while responding to Republica. Pokhrel stated that embankments were constructed as per government standards.

Budget for building embankments in the district was increased post Babai flood of August 2014. The flood had displaced hundreds of families and claimed 30 lives.

Pokharel further shared that embankments worth millions of rupees are being erected near Rampur, Prayagpur, Kushumdanda and Haat Bazzar, among others. “Some of them are are still under construction and some almost complete,” he said. Records from the office show that around Rs 210 million have been spent on constructing embankments here during the last three years.

Embankment along Babari River giving away well before monsoon

BARDIYA, June 13: The embankment constructed by the government along the Babai River near the Gulariya market has started eroding. Visible... Read More...

KATHMANDU, July 9: The government has started handing over letters of termination of appointment to those who were appointed by... Read More...

RAJBIRAJ, July 6: A joint security squad has begun the reconstruction of a dam on the Mahuli River based in... Read More...