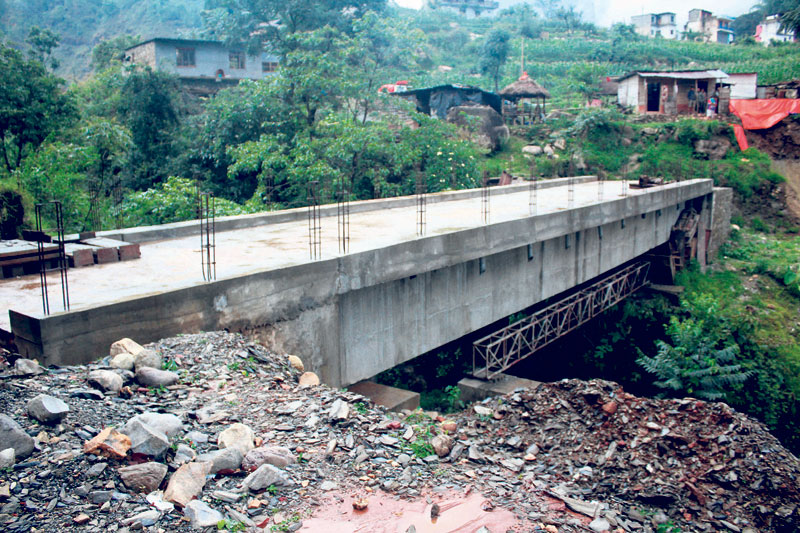 BAGLUNG, June 13: Locals of at least 12 village development committees (VDCs) have been affected because of the delay in construction of a concrete bridge over Theule Khola in Jaimini Municipality.

The bridge was scheduled to be completed two years ago.

The delay in construction of the bridge could bring transportation service to areas like Sarkuwa, Binamare, Arjewa, Jaidi, and Rangkhani Bareng of Jaimini Municipality to a halt.
“Monsoon has started earlier this year. Transport service to southern part of the district could be affected,” Dil Bahadur Darji, who drives a public vehicle on Baglung-Jaidi road section, said. “It is very difficult to cross the river during rainfall. Few days ago, I had to wait for three hours for the water level in the river to subside.”

The bridge is estimated to cost Rs 19 million. It was originally scheduled to be completed in February, 2016. But nobody knows when the bridge will be completed.

District Development Committee, Baglung and Chitwan-based MRN/ Honest JV Company had signed contract agreement to complete the bridge within a year. Though the deadline has already crossed, District Coordination Committee has not started legal proceedings against the contractor.

Khagendra Dahal, chief engineer at the District Technical Office, Baglung, stated that the company could not complete the project in time for it was not allowed to work in the prescribed location. “The project site had to be changed after signing the agreement. Even the design had to be changed. It delayed the project,” he added.

“We had to change the location and the design as a hydropower project is starting its work in the previously prescribed location. Also, locals refused to provide land for the bridge.”

However, Tilak Thapa, a local of Kusmu Shera, alleged that the construction company and the District Technical Office, did not expedite work even after locals provided land for the bridge.

MECHI, Feb 3: The news that a new bridge will be built over the Mechi River has elated a lot of... Read More...

KHOTANG, Jan 30: The construction of a bridge over Sunkoshi River at Phoksingtar, which links Khotang and Udayapur districts, has remained... Read More...