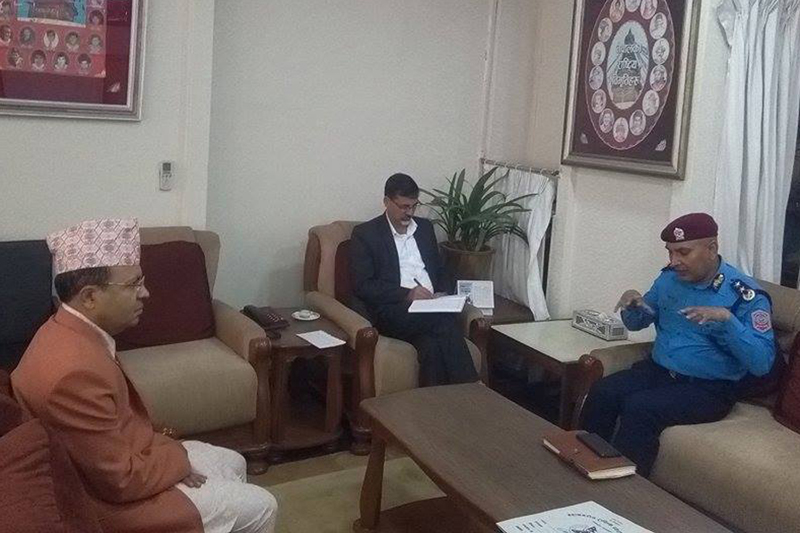 Issuing directives to chiefs of Neal Police, Armed Police Force and National Investigation Department to this end at the Home Ministry today, Home Minister Sharma said, "Resolve the traffic problem of Kathmandu Valley in such a way so that people can feel a great relief as they experienced during the ending of the load-shedding."

He also urged them to laid an emphasis on imparting traffic education to people rather than charging Rs 200 fine in case of the violation of traffic rules.

Home Minister Sharma further added, " Just imposing a fine on those pedestrians violating the traffic rules is not enough to discourage the trend of crossing road haphazardly. Traffic education is important and let's make people aware of it . The system of imposing a fine will do no good for anyone."

Stressing the need of making arrangements for smooth movement of vehicles by using available means and resources, he directed the traffic police to make details of the work plan to be carried out for traffic management in coordination among other ministries and departments.

He opined for operating big buses like Sajha and running vehicles based on odd and even number plates in the capital to lessen the traffic jam.
Minister Sharma further directed the officials to deliver the results which could be realized in action and urged the officials concerned to clear the roads removing the debris stored on the roadsides.

It is stated that traffic police were finding it very hard to ensure smooth traffic flow due to lack of required laws. The Valley roads do not have proper zebra crossing, traffic lights among other essential infrastructures essential for busy roads.

On the top of that, drivers' negligence is equally blamed for posing challenges for traffic management in the Valley, according to IGP Aryal.

Likewise, the syndicate system in transport business which is said to be already ended legally, is yet to be put to an end in practice. Passengers have been hit by this system institutionalized by transport entrepreneurs, according to him.

" There is the immediate need that the State either by giving grants or taking other measures should promote the operation of large vehicles in urban areas and discourage the people to use private vehicles so as to properly deal with the issues of traffic management," he asserted.

Metropolitan Traffic Police Chief Deputy Inspector General of Police, Mingmar Lama, said though an increase number of light vehicles had fueled problems in the traffic management, various efforts were being undertaken to cope with the adversities in traffic management.

On the occasion, IGP Aryal informed the meeting that budget of Rs three billion is currently needed to restore the capital's traffic light system.

Traffic inspector Sitaram Hachhethu presented a report which stated that 52 four-wheelers and 81 motorcycles ply on the Valley roads per minute.

Home Secretary Lok Darshan Regmi informed the meeting that the government was planning to come up with a long-term strategy on traffic traffic management. RSS

KATHMANDU, Nov 23: At the time when people in the Capital City are confused whether power cut will restart or... Read More...