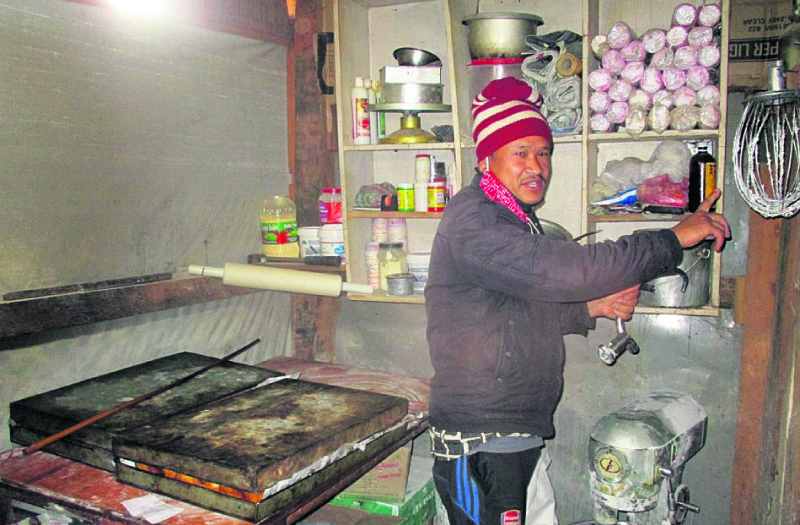 DHADING, June 12: Maru Lama of Satyadevi in northern part of Dhading has been earning good money by producing bakery items in his village itself.

Lama, who ventured into the business four years ago, has been sending his products to nearby villages as well. “I earn around Rs 45,000 per month by selling bakery items,” he told Republica.

The young entrepreneur did various jobs before trying his hands at bakery. “I have always worked hard in my life. My hard work is paying dividends now,” Lama, who runs a bakery shop in his village, said.

With his earning, he has managed to feed his family of five and provide good education to his kids.

“I couldn’t get proper education as our economic situation was very bad,” he said.
Lama worked for two years with Kaligandaki Hydropower Project. Then he returned home and opened a retail shop. But he couldn’t become successful. Later, he decided to try his luck at baking utilizing the skills that he had learned from his friends.

“After we left the job at the hydropower project, many friends went abroad. But I wanted to do something in my village itself,” he added.

Lama has been supplying his products to shops in his village as well as in Kuri, Darkha, and Brichet, among other villages. Bakery items like cakes, doughnuts and breads are popular among students. Some schools have been buying his products on a daily basis.
Though the demand for bakery items is high, he has not been able to meet the demand because of the lack of skilled workers. “I work alone as I am not getting skilled workers,” he said, adding: “Monthly sales can easily go above Rs 200,000. But I am not finding workers.”

KATHMANDU, Nov 11: It has already been four days since the Nepal Electricity Authority (NEA) started supplying electricity throughout the country... Read More...