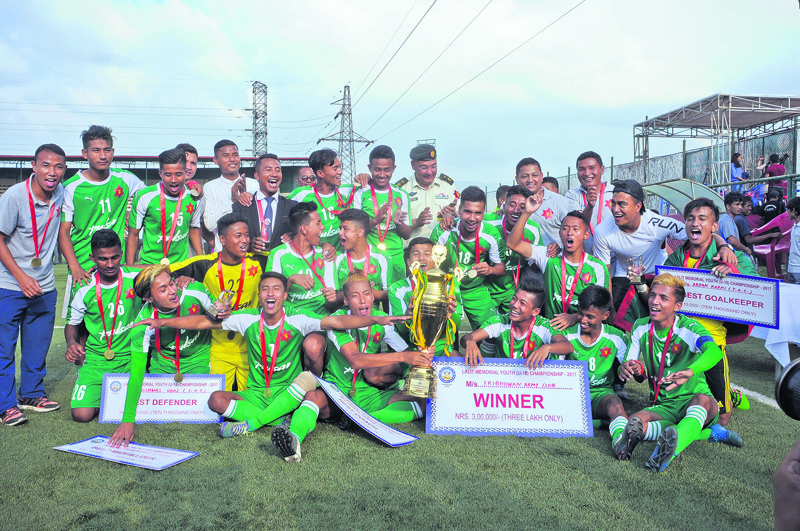 KATHMANDU, June 12: Tribhuvan Army Club has retained the title of Lalit Memorial U-18 Football Championship defeating CMG Sankata Club 1-0 in the final at the ANFA Complex on Monday.

Arik Bista's goal in the 52nd minute was sufficient for the departmental side to lift the title for second straight year.

Arik had scored a direct free kick from 22 yards to give the breakthrough to Army which was struggling with Sankata's defensive approach throughout the match. Army was provided free kick opportunity after Sankata's defender Bikash Lama brought down Army's striker Susan Lama.

Despite the victory, Army's Coach Chakra Tamang said that his players didn't play up to their full potential. “As we had conceded one red and couple of yellow cards in the semifinal match against Nepal Police Club (NPC), my players were under pressure today.

So they couldn't play up to their mark especially in the first half,” said Army's coach Tamang who also had led the team to the title in the last edition beating Jagadamba Lumbini FC in the final.

However, he was delighted toward the overall performance of his players throughout the tournament. “Comparatively, we played better in this edition than the last one. We have good squad studded with talented young players,” added Tamang.

Army has 12 players coming from ANFA Academy, according to Tamang who spent 12 years as a player with the departmental team before retiring in 2012.

Talking about the future of the players of this team, Tamang said, “Eight to nine players from this squad are likely to earn promotion to the first team.”

Meanwhile Sankata's Coach Sugan Tandukar expressed his satisfaction toward the performance of his players. “Reaching the final in this championship is obviously a big achievement for the team. We conceded goal due to our own mistake and failed to reply as we missed many chances,” said Sankata's Coach Tandukar.