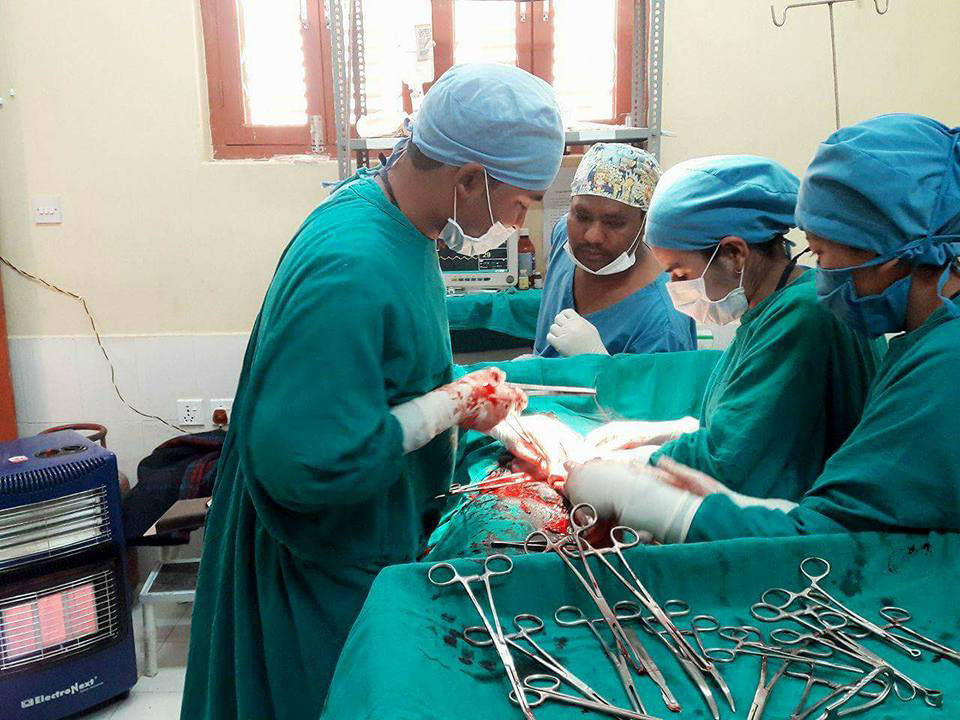 ROLPA, June 7: Rolpa District Hospital, the one and only hospital in the entire district, lacks blood bank, among other basic facilities. This has paralyzed the hospital service, lament patients as well as hospital staff. According to Dr Bipin Ghimire, it is hard to save life of patients who are rushed here in critical condition.

“We do not have a blood bank. We cannot help patients during emergency,” said Dr Ghimire. “Sometimes doctors and staff themselves donate blood to the patients. We are in very sorry condition,” he added.

“She would have died had she not received blood immediately. We sought help from police and army but their efforts went in vain. Then we decided to donate blood to her.

However, just one person's blood would not suffice as the patient's hemoglobin was just 4 points,” he said.

“We have donated blood several times. Saving life is what we try till the end,” Dr Ghimire said.

According to health worker Kul Bahadur Dangi, the hospital has kept details of all the hospital staff so that they could be reached for blood at the time of need.

“We can't see patients dying before us. So, the hospital has kept record of all the staff. We donate blood in time of need,” he said.

The hospital currently has 15 beds. In view of the flow of patients, the number is negligible. Even the beds and other furniture in the hospital are in pathetic condition.

No surgical delivery
The hospital had introduced surgical delivery service for women some time ago. But, the service is no more available. Expecting mothers who come here with high hopes are referred to elsewhere. This has badly affected the health of the mother and babies.

According to hospital sources, the service came to a halt after Dr Najir Khan resigned citing 'dissatisfaction' with the hospital administration. Stating that the hospital was operating poorly, Dr Khan tendered her resignation. According to health worker Sharmila Acharya, few women come to the hospital for delivery these days.

“Only those who are unaware of the situation here come here for delivery. But if they give us a call or visit the hospital, we refer them elsewhere,” she said.

District Public Health Office chief Dr Bhawani Sharma informed that there is lack of adequate number of doctors as well. The hospital opened vacancy for doctors but received no application, she said.

“Who would come and serve here in this remote area? Everyone loves to stay in towns and cities,” he said.  He added that people of remote villages of Rolpa have been badly affected as the government has not been able to provide health service to them.

“Even for minor service, they have to travel a great distance. This makes it very costly for them,” he said.

Patients from Rolpa have been forced to go to Butwal and Nepalgunj, among other destinations, for health services.

Abortion service halted
Abortion service is being carried out even by small clinics these days. However, despite being the main hospital of the district, Rolpa District Hospital does not provide this service to needy women. According to Dr Bipin Ghimire, unsafe abortion has been taking toll on women's health after the much-needed service came to a halt in the hospital as it was not able to fulfill quota of trained health workers and doctors.

“Women first go to private clinics. They come here only if the case gets complicated. But then we cannot help. The service is unavailable,” he said. “Even if they directly come here for abortion, we are not in a position to help them. We wish we could provide abortion service,” he added.

Lack of medicine
People of Rolpa have another serious grievance. They don't have access to even common medicines. Neither the district hospital provides it nor do they get it at local health centers. According to the in-charge of Pang Health Post, Damodar Pulami, patients do not get even the medicines for fever, diarrhea and dysentery.

“During monsoon, the flow of patients becomes very high. We can't provide them even common medicines. The center does not send medicines here,” he said, adding that not even one third of the medicines demanded by the district are supplied by the center.