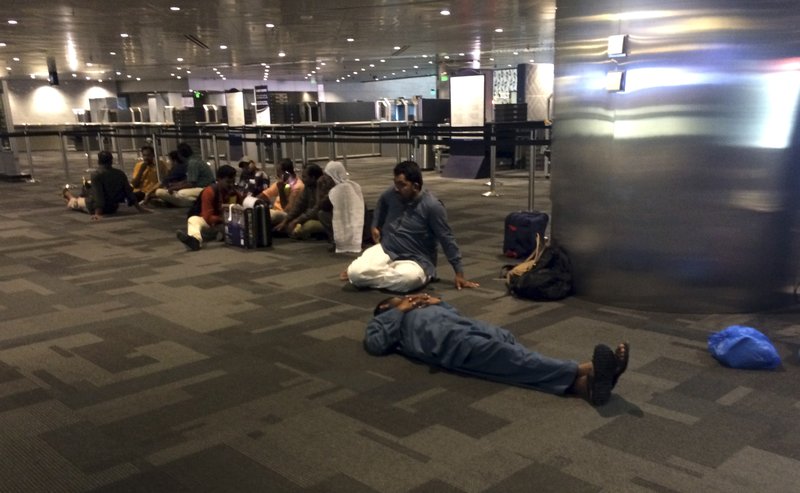 DUBAI, United Arab Emirates, June 6: Kuwait is trying to mediate a Gulf crisis between Qatar and its Arab neighbors, which have severed ties with the energy-rich travel hub and moved to isolate it from the outside world, Qatar’s foreign minister said Tuesday.

The biggest diplomatic crisis in the Persian Gulf since the 1991 U.S.-led war against Iraq pits several nations against Qatar, which is home to some 10,000 American troops and a major U.S. military base. Airlines suspended flights and residents nervous about the peninsula’s lone land border closing cleaned out grocery store shelves.

Sheikh Tamim bin Hamad Al Thani “received a call from the emir of Kuwait asking him to postpone it in order to give time to solve the crisis,” Sheikh Mohammed said.

Still, the minister struck a defiant tone, rejecting those “trying to impose their will on Qatar or intervene in its internal affairs.”

The state-run Kuwait News Agency reported Kuwaiti ruler Sheikh Sabah Al-Ahmad Al-Sabah spoke with Qatar’s emir Monday evening and urged him to give a chance to efforts that could ease tensions. The call came after a senior Saudi royal arrived in Kuwait with a message from the Saudi king. An Omani diplomat traveled to Qatar on Monday.

U.S. President Donald Trump — who traveled to Saudi Arabia for a recent conference of Arab nations and told Qatar’s ruler at the time that “we’ve been friends now for a long time” — weighed in on the conflict for the first time. Trump did not take a position, but appeared to suggest it was understandable to isolate Qatar.

“During my recent trip to the Middle East I stated that there can no longer be funding of Radical Ideology,” he tweeted. “Leaders pointed to Qatar - look!”

Meanwhile, the Philippines announced it will temporarily suspend the deployment of Filipino workers to Qatar. Labor Secretary Silvestre Bello said the ban took effect Tuesday, but there is no plan yet to repatriate the more than 200,000 Filipino workers in Qatar. More than 1 million Filipinos reside and work in Saudi Arabia, Qatar and Bahrain.

Bahrain, Egypt, Saudi Arabia and the United Arab Emirates announced Monday they would cut diplomatic ties. Yemen’s internationally backed government, which has lost the capital and large portions of the war-torn country, also cut relations with Qatar, as did the Maldives and one of conflict-ridden Libya’s competing governments.

The move came just two weeks after U.S. President Donald Trump visited Saudi Arabia and vowed to improve ties with both Riyadh and Cairo to combat terrorism and contain Iran. U.S. Secretary of State Rex Tillerson said the move was rooted in longstanding differences and urged the parties to resolve them.

Soccer’s governing body FIFA said it remained in regular contact with Qatar, which will host the 2022 World Cup. It did not elaborate.

Saudi Arabia said it was cutting ties due to Qatar’s “embrace of various terrorist and sectarian groups aimed at destabilizing the region,” including the Muslim Brotherhood, al-Qaida, the Islamic State group and militants supported by Iran in the kingdom’s restive Eastern Province. Egypt’s Foreign Ministry accused Qatar of taking an “antagonist approach” toward Cairo and said “all attempts to stop it from supporting terrorist groups failed.”

Qatar long has denied funding extremists, though Western officials have accused it of allowing or even encouraging funding of Sunni extremists like al-Qaida’s branch in Syria, once known as the Nusra Front.

The Gulf countries ordered their citizens out of Qatar and gave Qataris abroad 14 days to return home to their peninsular nation, whose only land border is with Saudi Arabia. The countries also said they would eject Qatar’s diplomats.

The nations said they planned to cut air and sea traffic to Qatar. Trucks carrying food have begun lining up on the Saudi side of the border, apparently stranded.

Qatar Airways, one of the region’s major long-haul carriers, has suspended all flights to Saudi Arabia, the United Arab Emirates, Egypt and Bahrain until further notice. On its website, the carrier said the suspension of its flights would take effect Tuesday and customers are being offered a refund.

Saudi Arabia meanwhile said Tuesday it revoked Qatar Airways’ operating licenses and closed the airline’s offices in the kingdom. The Saudi ports authority said Qatari-flagged shipping vessels are barred from docking. It said it ordered shipping agents not to receive any vessels owned by Qatari companies or Qatari nationals and not to unload any goods from Qatar.

The air route between Doha and Dubai is popular among business travelers and both are major transit hubs for travelers between Asia and Europe. FlightRadar24, a popular airplane tracking website, said Qatar Airways flights already had started to be affected.

“Many of Qatar Airways’ flights to southern Europe and Africa pass through Saudi Arabia,” the site said. “Flights to Europe will most likely be rerouted through Iran and Turkey.”

Developing nations' plea to world's wealthy at U.N.: stop vaccine hoarding
4 minutes ago
Afghanistan and the United Nations
1 hour ago