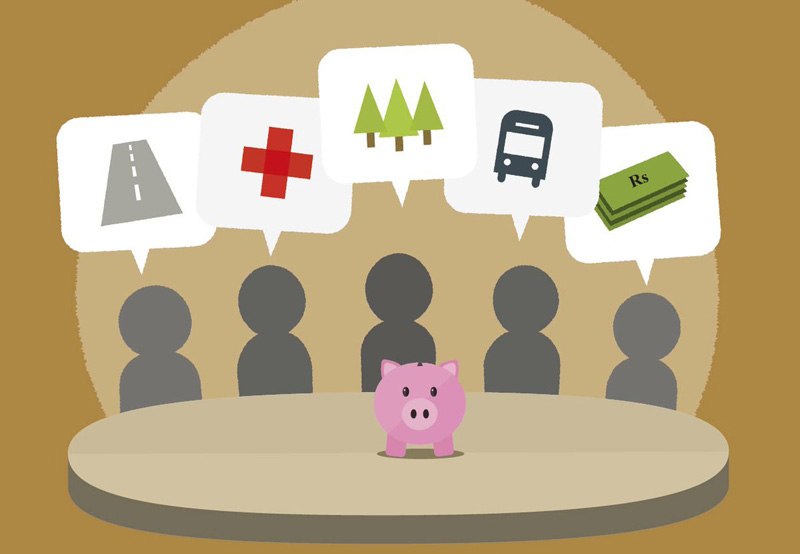 Newly elected local governments can in many ways exercise powers comparable to that of Singha Durbar
On May 29, the outgoing government released its annual budget for the fiscal 2074/75 (which starts on July 16) worth Rs 1,278 billion. Presenting the budget in the national parliament, Finance Minister Krishna Bahadur Mahara had said, of the total budget, Rs 225 billion (17.6 percent) would be directly devolved to newly established village and municipal councils. Only 33 percent of this budget is conditional.

This historic budgeting for local governments opens up several possibilities, many of which are exciting. First, this is the beginning of implementation of federalism in the country. Local governments are empowered to exercise the greatest level of autonomy, such that they can exercise powers comparable to that of Singha Durbar. The days when local governments would have to endlessly wait for the decision of the central government are gone. Local governments of our time can decide their fate on their own, both in terms of policy-making and financing.

Second, the role of local governments has been expanded to include all steps of an ideal cycle of policymaking: formulation, implementation and evaluation. The earlier constitutional and legal frameworks had envisioned local bodies (not governments though) to be the main actors in implementing policies and programs, most of which used to be decided at the central level. Reformers in the past were seemingly concerned about enhancing the implementation capacity of local bodies, rather than with actually enhancing their policymaking capacities. The newly formed local governments will be accountable for formulation, implementation and evaluation of public policies at the local level.

Third, local governments can now make long-term development plans on their own.

These possibilities, nonetheless, constitute the exciting part of the story. The other part is rather distressing. Three important aspects of local governance should be acknowledged here, as these encompass the question of how difficult it is to implement the aforesaid tasks. First of these concerns the capacity of local governments. Almost all the local governments in Nepal have relatively unskilled bureaucratic staffs, and ineffective structures. The old system of local governance is in line with the traditional hierarchical public administration, which, in many ways, would have been incapable of carrying out new responsibilities given to them by the new constitution. On top of that, many newly elected local leaders may take some time to understand local bureaucracy and existing constitutional and legal frameworks. But to what extent will the local governments be capable of effectively implementing such a massive budget?

The third dimension is about ensuring public participation. While the existing structure of local government is instituted based on the principles of representative democracy, there does not seem to be any mechanism to ensure the participation of those who lost elections. Moreover, the existing budgetary framework that was recently proposed in the national parliament allows village and municipal councils to decide on budget allocation.

How will these councils ensure the participation of people representing a wide spectrum of the society? There is a danger that election winners could ignore the voices of losers.

But the new situation also opens up new ways of engaging ordinary people in public policies, developmental projects and service delivery at the local level. The notion of participatory budgeting are articulated in the proposed Local Governments Act, which the national parliament is currently considering. This law will be an indicative legal framework under which local governments make their plans and programs. The continuation of existing participatory planning will be another way through which local governments can ensure participatory budgeting.

Although there is little research on it, available empirical and academic assessment of participatory planning process in Nepal suggests that it is instrumental in a) maintaining legitimacy of local decisions, b) holding local officials accountable to local people, c) ensuring wider (not only deeper) participation of communities in local decision-making, and d) enhancing the quality of local governance in terms of transparency and implementation of local decisions. Our new local government units should learn a lot from these past practices.