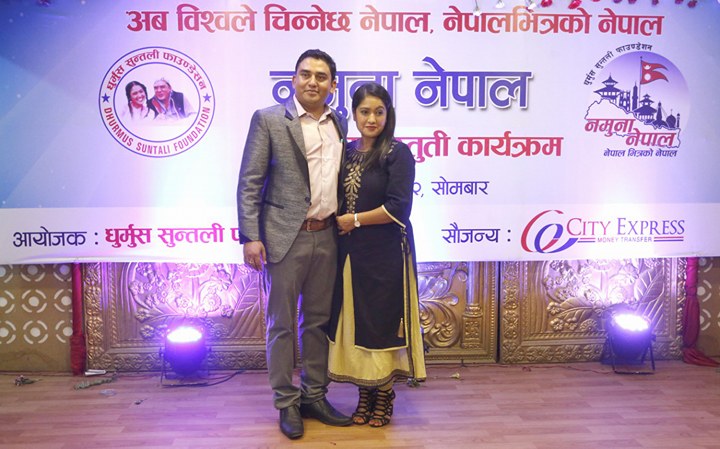 Under the Dhurmus-Suntali Foundation, both have envisioned constructing an inclusive-integrated settlement sprawled in up to 1,000 ropanis of land as their fourth project estimated to cost approximately Rs 5 billion.

Earlier, they had built integrated settlements in Kavre, Sindhupalchowk and Mahottari.They have named the new project as Nepal Bhitrako Namuna Nepal (a model Nepal within Nepal).

The settlement will have communities of different castes, religions and ethnic groups from the hills, mountains and terai. Replicas in miniature of famous tourist destinations like the mountains, Muktinath Temple, Swayambhunath Stupa, Bauddhanath Stupa, Pashupati Temple, Mayadevi Temple, Janaki Temple, and Dharahara, among others, will be built on the premises of the settlement.

The plan is to also run a metro train inside the settlement.

“We have a dream to develop the country and promote the nation across the world,” said Kattel in an announcement ceremony held in Kathmandu on Monday. “Now, the dream is about to come true. I request the government to provide the land required to build the structures. I can announce the date of project completion the day we are provided the land.”

Kattel, also the chairman of the foundation, urged the government and the people to donate money to complete "the dream project" in time.

“It's a huge amount of money for a common person like me but this is a small amount for the government. So, the government can play a major role by providing land and financial support. Even if the government doesn't support the project, I know the whole Nepali people will,” said Kattel.

“The settlement will be a Nepal within Nepal, representing the various cultures and religions. It will also have a temple, church, gumba, stupa and mosque,” he said.

Talking to Republica, Kattel said that they are requesting the government to provide the land either in Kathmandu, Lalitpur, Bhaktapur, Kavre, Sindhupalchowk or Makwanpur. “I have already briefed Prime Minister Pushpa Kamal Dahal about this project and he is positive about supporting the initiative,” Kattel told Republica.

He said the project is estimated to be completed in around four years after the start of the construction.

“The construction period will depend on the kind of land. However, we have estimated that it will be completed within four years, if the government builds basic physical infrastructures like road, electricity, water supply to the project site,” he said.

Rs 3.5 million pledged
On the first day of project announcement, two organizations have already announced to provide a financial support of Rs 3.5 million.

Kattel said that the foundation already has Rs 21.3 million in its reserve fund from previous projects that can be invested in the new project.

KATHMANDU, Jan 2: Leaders of the left alliance have urged the Election Commission (EC) to announce the final poll results without... Read More...

BARDIBAS, Feb 12: The Dhurmus – Suntali Foundation of Nepal, which is currently building the integrated model settlement in Bardibas... Read More...