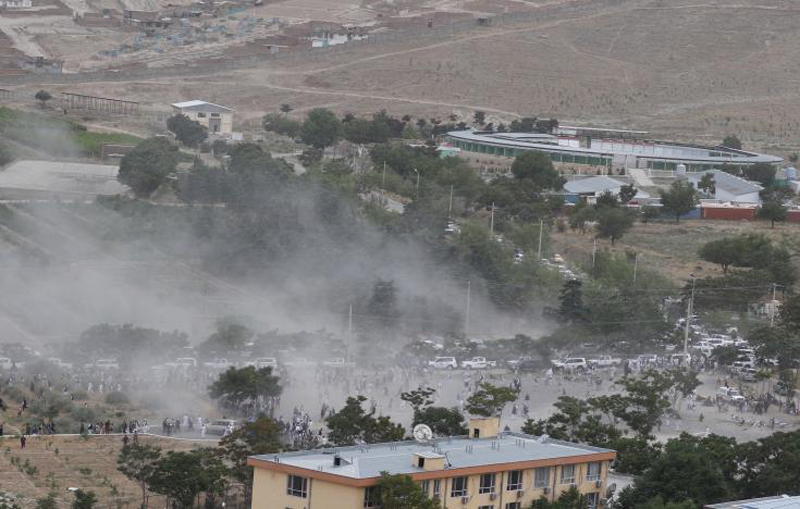 KABUL, June 3: A series of blasts in Kabul on Saturday killed at least 19 people at a funeral for one of the victims of clashes between police and protesters a day before.

The latest explosions continued a wave of violence in the capital since a devastating truck bomb on Wednesday.

Saturday's blasts shattered an uneasy calm which had descended after authorities blocked the streets of Kabul in a bid to prevent a repeat of the bloody confrontation between protesters and police on Friday.

The violence, fueled by public anger over the inability of President Ashraf Ghani's divided government to ensure security in Kabul, has exacerbated political tensions between rival factions, and Ghani issued a call for unity.

"The country is under attack," Ghani said in a message on Twitter. "We must be strong and united."

Kabul's Italian-run Emergency Hospital, which has treated a stream of wounded over the past few days, said 19 people had been reported killed and 16 wounded had been brought to the hospital. The interior ministry said there were six dead and 87 wounded.

Government Chief Executive Abdullah Abdullah was at the funeral but was unharmed, while survivors said a series of explosions had ripped through the crowd, most of whom appeared to be linked to Abdullah's mainly Tajik Jamiat-e-Islami party.

"There were sounds of explosions everywhere and I saw my hands and face were on fire," said Mohammad Azim, who was being treated for burns at the Emergency Hospital. "There were parts of human bodies everywhere."

One of the most bloody weeks in Kabul for months began with the devastating truck bomb attack in the city's diplomatic zone on Wednesday morning which killed more than 80 people and wounded more than 460.

That was followed by five more deaths on Friday during clashes which broke out between protesters and police at a rally demanding the resignations of Ghani and Abdullah over repeated security failures.

As the violence has continued, it has become increasingly politicized, exacerbating tensions between rival ethnically based political groups.

The Taliban, which has often carried out bomb attacks in the past, issued a swift denial that it had any role and instead blamed factional rivalries in the government's own camp, the group's spokesman Zabihullah Mujahid said.

Saturday's blasts occurred at the funeral of the son of the deputy Senate speaker, Mohammad Alam Izadyar, an ethnic Tajik ally of Abdullah. He died after being seriously injured in clashes during Friday's protest.

Rahmatullah Begana, who was at the funeral, said the first explosion occurred as the mullah made the first call to prayer and as people scattered, it was followed by another.

"I saw a lot of people lying on the ground," he said.

The violence further complicates the situation confronting U.S. and coalition officials as they work on plans expected to see an increase of between 3,000 and 5,000 in the number of foreign troops in Afghanistan.

As anger against the government has grown, Ghani's international partners have become increasingly alarmed, with the United Nations calling for restraint and the U.S. embassy in Kabul warning against letting protests be taken over

"While peaceful demonstrations are welcome in a democracy, some narrow political elements used this opportunity to spark violence, resulting in more death and suffering," the embassy said. The statement was released after Friday's clashes but before the latest attacks on Saturday.

With much of the capital locked down by security forces, a group of around 200 protesters remained near the blast site in the center of town, sheltering from the sun in open tents.

Otherwise, security authorities in Kabul told people not to attend protests and demonstrations, citing the risk of attacks on large gatherings of people.

While unusually large, Wednesday's truck bomb scarcely differed from a long series of previous high-profile militant attacks that have killed hundreds of civilians in Afghanistan since most international forces left the country in 2014.

In the first three months of the year at least 715 civilians were killed across the country, after almost 3,500 in 2016, the deadliest year on record for Afghan civilians.