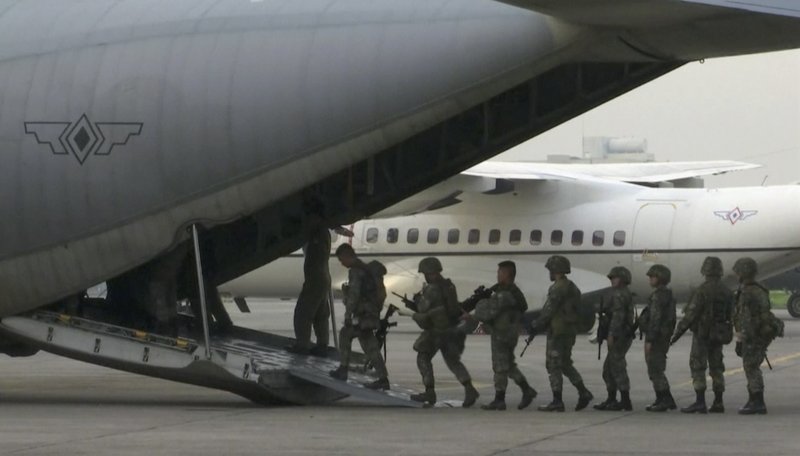 MARAWI(PHILIPPINES), June 1: Foreign fighters including Chechens and Arabs are among Muslim militants who were killed in weeklong fighting in a southern Philippine city that involved about 500 gunmen aligned with the Islamic State group, the Philippine defense chief said Thursday.

A Philippine air force plane dropping bombs on militants killed 11 soldiers and wounded seven others in “friendly fire” as government forces were struggling to rout the assailants in Marawi, the military said.

Defense Secretary Delfin Lorenzana said in a televised news conference that eight of the foreign militants slain in intense street combat included a Chechen, a Yemeni and several Malaysian and Indonesian fighters.

Lorenzana said that 25 other militants who died in the fighting had been identified as Filipinos. There were a total of 120 militants killed since last Tuesday, when a failed government raid to capture one of Asia’s top militants in Marawi triggered the siege of the city by the rebels. President Rodrigo Duterte declared martial law in the Mindanao region, the southern third of the Philippines, and poured in troops backed by airstrikes to push the attackers out of the city.

The Marchetti S-211 jet was on a bombing run over militant positions in Marawi on Wednesday when one bomb hit army troops locked in close-range combat with the extremists who have taken cover in buildings and houses, military spokesman Brig. Gen. Restituto Padilla said. The plane had made three successful bombing runs before dropping the wayward bomb.

Padilla said the military has ordered an investigation of the friendly fire, which reflects the difficulty faced by government forces to contain the insurrection despite their overwhelming number and firepower.

“Despite the stringent procedure followed, there happens even with the best of armed forces, a case of friendly fire hitting our own troops,” Padilla told The Associated Press.

Military chief of staff Gen. Eduardo Ano has ordered an investigation partly to prevent another incident, Padilla said, as government forces, backed by more than 30 assault aircraft, continue to advance toward the remaining positions of the militants.

At least 25 soldiers and five policemen also have been killed in clashes.

Daily infections rise to 12,338 in Nepal, active case load reaches 57,328
16 hours ago
99 Nepali workers set out for Israel; labor minister, ambassador reach TIA to see them off
23 hours ago

BFIs approves refinance loans of Rs 106.8 billion as of mid-January
16 hours ago

Cut off by volcano, Tongans relieved as contact restored
17 hours ago