Musahars deprived of allowance for not having toilets 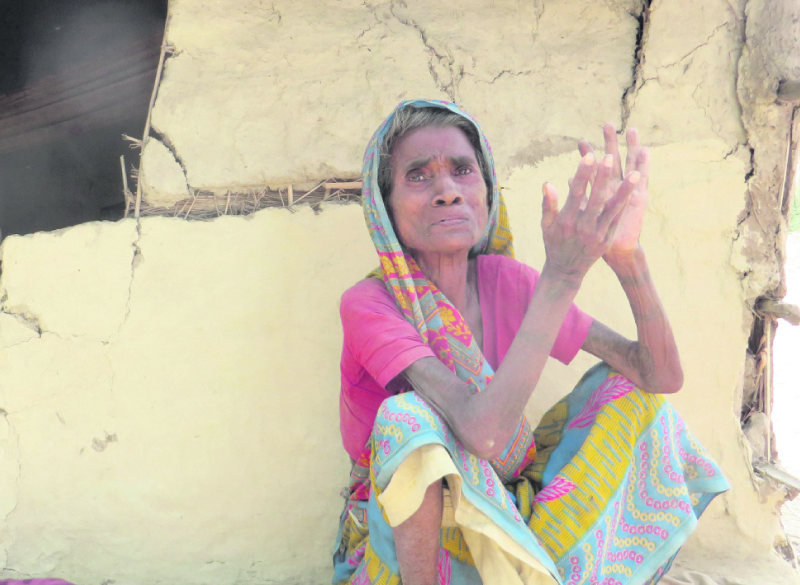 SIRAHA, June 1: Sixty-three years old Gauri Saday of Sakhuwanankarkatti Rural Municipality is compelled to live a miserable life in her old age. Gauri, who can't even move from one place to another without a stick has no one to look after her. She has visited the rural municipality office many times seeking government allowance, but she always returns home empty-handed. “You are not going to get the allowance until you build a toilet in your house,” the officials of the rural municipality always tell her.

Gauri is not the only one who has been deprived of her allowance. There are so many elderly people in the Musahar community of Sakhuwanankarkatti Rural Municipality who have been dealing with the same problem. “How can we manage money for toilets when we don't even have money to for two square of meals a day?” asks Gauri who has been bed-ridden for the last two months in the lack of treatment. It has been more than six months that she has not received her allowance. “I would have at least been able to cure my disease if I got the allowance,” she laments.

She lives in a shack which does not even protect her from sun and rain. “What is the use of a toilet if I die?  How will I manage money for the toilet when I can't even afford to treat my disease?” she asked.

Asha Saday of Naraha Rural Municipality, Devipur has not been able to get proper sleep for a long time due to the burden of debt. She had burrowed loan from the landlords to build a toilet as demanded by the rural municipality. But she hasn't been able to pay back the loan even after working day and night and the interest has been piling.

Similarly, Phulo Saday of the same village lives in a hut made from hay and bamboo.

After the death of her husband she has been rearing her children all alone. Phulo, who is a labourer says, “I don't have a permanent job. At times, it is hard for me even to mange proper meals for my children.” There are around 40 Mushar families who have been living in shacks and huts from a long time. “How can they expect us to make toilets when we don't have even a proper house to live in?” asked Shrabati Saday of the same locality.

In the past when there was no toilet in any house,  people had to struggle a lot for maternity allowance, senior citizens allowance. Similarly, they faced problems in registering marriages and deaths and getting recommendation for citizenship. On top of it, the police used to take strict action against people who practiced open defecation. But people didn't have any option as there were no toilets.

There are many locals who built toilets with the hope of getting allowance but now they have been debt- ridden. “It may not be a problem for the well-offs, but what about us?” asked Shrabati. According to Mushahars, the toilet campaign is not a solution but a problem for them because it is their debt burden.

Toilets in kitchens!
The government has been spending millions to create a clean and healthy environment. But just to free the village from open defecation, it has been carelessly building toilets in the kitchens and bedrooms of the locals. There is not enough space in the houses of the poor Mushahars. So, government officials have built toilets in their kitchens!

Corruption control is a challenge: PM
51 seconds ago