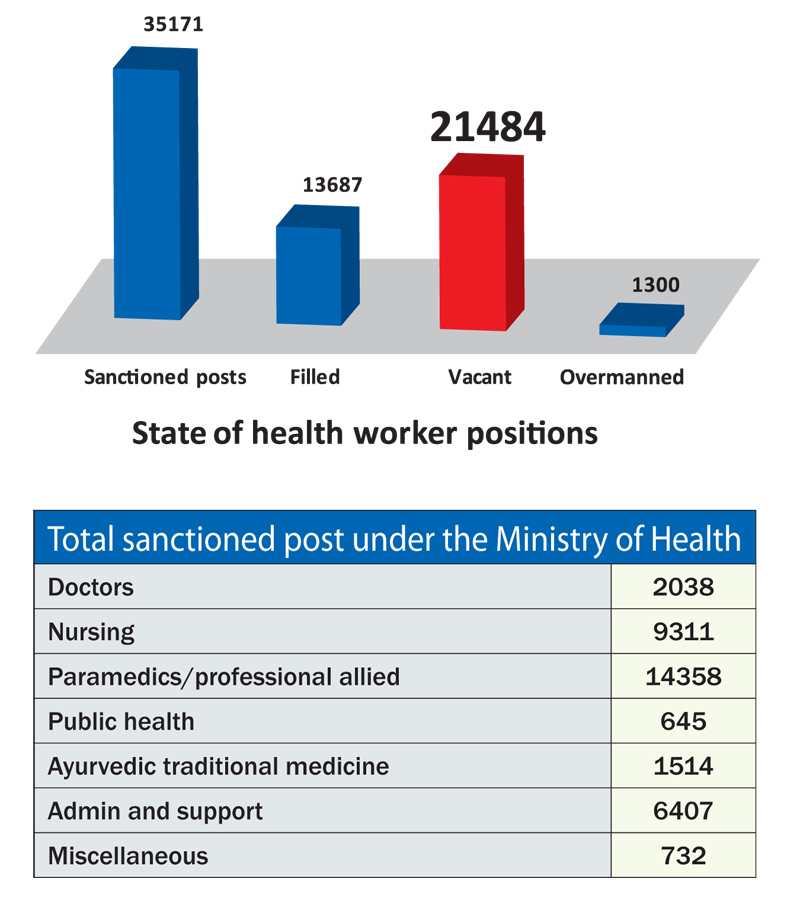 Includes 675 doctor positions
KATHMANDU, Dec 20: Positions for a total of 21,484 health staffs including 675 doctors at hospitals, health centers, health posts and other health institutions are vacant across the country.

According to the details provided by the Ministry of Health (MoH), altogether 675 posts of doctors including 8th, 9th and 10th levels are vacant in various districts.

While thousands of positions are vacant, 1,300 positions are overmanned in the overall health sector. Of the total 35,171 sanctioned staff in the health sector, 2,038 are for doctors and medical officers, 9,311 for nursing staff, 14,358 for paramedics/allied professionals, 645 for public health, 1,514 for Ayurvedic traditional medicine, 6,407 for administration and support, and 732 for miscellaneous staffers in the country, according to the MoH.

The sources at the MoH said that the doctors posted to the districts do not go to their postings and seek to stay in the Kathmandu Valley, where they can make handsome earnings.

“The doctors go to the remote areas mainly due to the facilities provided by the government. But they don't like to work even in the accessible districts,” said Prem Duwa, administrative officer who looks into appointment and transfer of doctors and staff at MoH. “There are hundreds of staff nurse positions lying vacant in the hospitals and districts. The Public Service Commission is in the process to appoint 219 doctors. Moreover, 99 doctors are being hired on contract basis,” he added.

On the one hand, the government has failed to supply essential medicines to about two dozen districts. Absence/shortage of doctors in the districts badly affects the treatment of the general public.

It is more critical when epidemics like cholera and dengue break out in the rural parts of the country.

For example, more than 300 people died of diarrhea in Jajarkot in 2009. Over 600 people were affected by dengue from July to November in 2016 in different districts -- mainly in Chitwan and Jhapa. Teams of doctors were deployed from the capital.

“The public health sector is in a sorry state,” said health expert Dr Shyam Raj Upreti. “The health workers should be ready and available at local level during disease outbreaks,” he said. “This is a concern of good governance to be addressed by the Ministry of Health.”

The government last year upgraded several primary health centers by increasing their bed capacity to 50 beds from 15 but failed to send required number of doctors. Also, the government has not done anything to appoint doctors as per the WHO standard. The doctors posted to districts either do not go to their postings or do not stay there for long.

“A comprehensive policy and good governance are a must to guarantee the health rights of the people,” said Upreti. “Also, the government should work to ensure a secure environment for health workers.”

Health Minister Gagan Thapa said that many doctors on the one hand are not interested to work for the government and on the other, they don't like to go to their postings. “Therefore, we are planning to provide additional incentives to doctors, produce 500 postgraduate doctors from zonal hospitals per year who will serve the government at least for five years, and collaborate with all the teaching hospitals which produce some 2,000 doctors annually, to work for a given time period in the public health institutions,” he said.

Out of the total of approximately 54,177 health workers in Nepal, 32,809 are involved in the public sector while 21,368 work for the private sector.

“We are also mulling issuing temporary licenses to doctors to make sure that they serve in the districts for at least a year,” said Minister Thapa. “We will develop a policy to assign a doctor in each institution.”

There are 3,991 public hospitals, primary health centers and health posts across the country. The government has allocated Rs 96 billion for the MoH in the fiscal year 2016/2017. Among total allocation, some 90 percent goes to salaries and administrative costs.

Health facilities across the country without essential drugs

KATHMANDU, Aug 26: Health facilities throughout the country have been lacking essential drugs for over a year as the government... Read More...

KATHMANDU, Nov 9: Hundreds of pharmacies across the country are running without registration for years. However, the government has not taken... Read More...