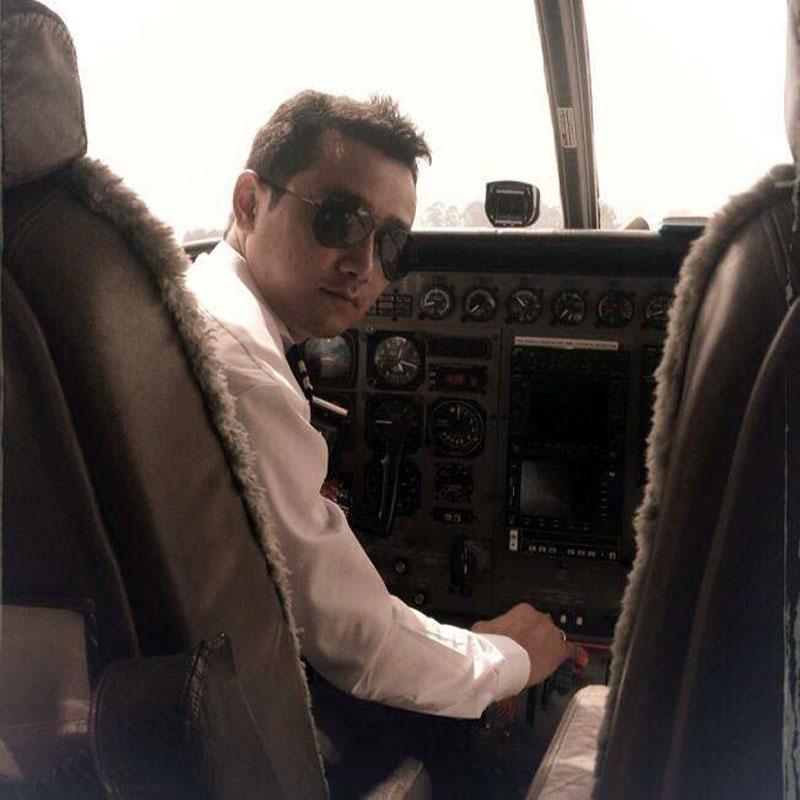 From an ordinary village boy to being the captain of Makalu Air, Sangye Gelek Lama has come this far with all his hard work and audacity to dream above his imagination. He has been flying with Makalu Air for seven years now. After working as a co-pilot for five years he was upgraded to Captain in 2015. He was the flying captain of Makalu Air, who along with his co-pilot survived the airplane accident in August, 2016.
Republica’s Sonam Lama caught up with Sangye Gelek Lama to talk about the setbacks and experience that he has witnessed so far in the field of aviation.

What was the driving factor for having an aim above your imagination?
Like every other passionate individual who aimed to achieve something big, I used to have this intense fascination for aviation since the time I saw helicopters landing in my village.

The moment of my childhood is still vivid to my mind when the army helicopters used to land in my village for surveillance and for the distribution of relief materials. Unlike other people, I used to run towards the helicopter in mere wonder in order to erase my curiosity.

Though there were never ending hurdles appearing from every corner of my way, I did not curb my dream of becoming a pilot and explore the world in a way that I had always wanted to.

What were the hardships that you encountered on your way?
Aspiring to become a pilot is putting everything that you have at risk. Born to a family who had to struggle hard each day for a better livelihood, my dreams had the least chance to come true. But fortunately with the constant support from my family members and relatives, I gathered up the courage to live up to my dream. Moreover, unlike other courses, there was not any scholarship provided which obliged to bear my own cost for the 15 months long pilot course. Although there were more than a hundred pilots in the market, the demand was four or five. And once you pass the exam, it was tough to get job without good networks and recommendation.

Has the scope of aviation improved over the decades in Nepal?
For a country like Nepal it takes time to invest and progress in such an expensive field like aviation. But, reflecting back to the time when I was struggling in this field, I find the scope of aviation is booming now. Back then, there was a limited demand but today the demand for pilots is increasing while the supply seems to be decreasing. With the increasing number of airlines and airports, I think the scope has broadened in many aspects.

As per you, what do you think is responsible for aboard casualties in Nepal?
Flying aboard is one of the safest means of transportation in the world. With every passing minute, there are a numerous aircrafts taking successful flight. But the displeasing fact is that we are so much affected by the accidents taking placing that we decide to make a wrong impression about aviation. When talking in the context of Nepal, the geography has a lot to do with accidents occurring frequently. Along with that, if in any condition the engine gets failed, the skills and experience of a pilot counts to the best to make a safe landing. The most safety device in an aircraft is a well-trained pilot.

Would you like to convey any message to the young aspirers out there?
Be positive and never fear to dream big. Stay spiritual and that will guide you towards positivity which is very important for your growth. Take as many risks as possible but make sure you build that confidence and trust in yourself to overcome all the odds on your way. Make sure to be prepared for the worst to come as the best things will remain there but the unfavorable circumstances will push your limits for good.