Differences between Madesh, Pahad and Himal to be removed: PM Dahal 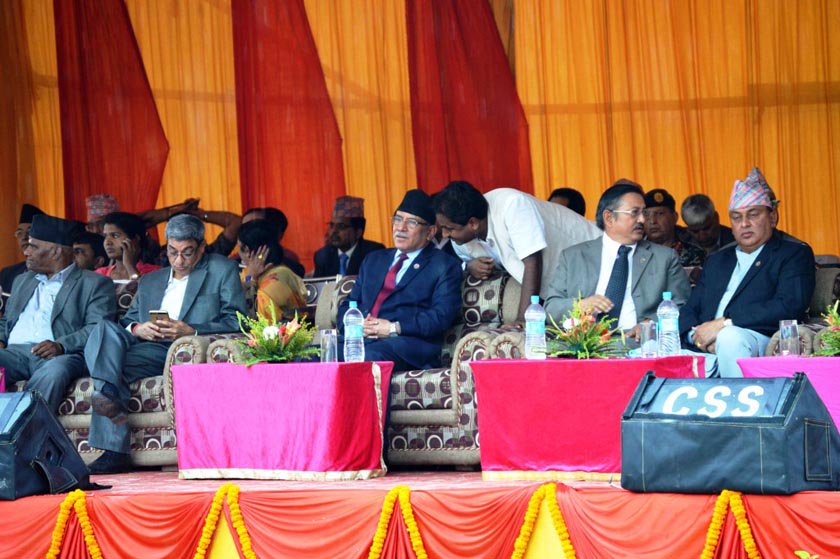 KATHMANDU, May 28: Prime Minister Pushpa Kamal Dahal 'Prachanda' has said that the fast-track road would play a historical role in linking the minds and heart of the Tarai, hills and mountains in the country.

Laying the foundation stone for the Kathmandu-Tarai-Madhes fast-track road in Nijgadh of Bara earlier today, he said the differences between the Madhesh, Pahad and Himal will end in the days to come. "Nobody can stop the road to take our mind, feelings and relations to a new height", he said while expressing the confidence that the road would strengthen the deep relations between Kathmandu and Tarai.

Expressing pride over being able to consolidate national unity and increasing the acceptability of the new constitution, the Prime Minister said that the fast-track should be completed with a national determination, as it is certain to have a lasting impact.
The Prime Minister also said that the construction of the road was both a matter of pride and challenge for the Nepali Army. If it is completed within the deadline following the set standards then the Army would earn unprecedented pride from the Nepali people, he added.

Minister for Defense Balkrishna Khand, Minister for Physical Infrastructure and Transport Ramesh Lekhak, Chief of the Army Staff Rajendra Chettri and Coordinator of the High-level directive committee formed to oversee the fast-track construction Chief of Staff Purna Chandra Thapa shed light on various aspects as well as the importance of the road.

Major General Yogendra Khand, who heads the army's fast-track project, said the 76.2 km road will start from Khokana of Lalitpur to pass through Chalnakhel of Kathmandu, Panchakanya of Makwanpur, Ratanpuri of Bara to join the East-west highway. It will not only save precious fuel, ease transportation and increase the lifespan of vehicles but also make a big contribution to the economic development of the country.

The army will work on the fast-track in 10 different locations. The four-lane road is expected to cost Rs. 1.12 billion and targeted to be completed in four years time. There are 18 bridges to be built along with a 1.5 kilometers tunnel. Travel time from Kathmandu to the point in Bara will come down to just one hour upon completion of this much-awaited road. RSS