“Where did you get the idea of self harm?”
“I don’t remember where I first learnt about it. I don’t know. ”

“Why did you want to hurt yourself ?”
(After a long pause) “You can’t explain why you inflict self harm. I guess I was having a rough time back then.”

Back then is eight years ago and Astha* (name changed) was a 13-year-old eighth grader. She says she is unsure of her justification because even though she was a victim of emotional bullying by her peers at school, she is also well aware that she wasn’t the only one. They didn’t feel the need to hurt themselves but she did.

What started off as a tendency to scratch her legs and back, elevated to cutting her wrists and once, even taking multiple paracetamol pills in a naïve attempt to end her own life.

By that time, Astha shares that she was feeling so haggard that she forced herself to ask for help. Though that conversation with her parents turned out to be an incredibly difficult one, she describes the timing of it as perfect.

A feeling that became even more profound when she was in the 10th grade, after two years of seeking counseling, when one of her batch mates was found dead in her room. It was later confirmed to be a suicide.

“I know I got help at the right time,” says Astha, “I didn’t even know that my classmate was experiencing trouble. Personally, it was a chilling realization of just how close I came to having the same fate.”

It’s never easy to hear news of suicides, and whether we happen to know the individual or not, we all feel a deep sense of sorrow. The feeling is also followed by a slew of questions that almost always remains unanswered. And unfortunately, these cases even among the youths aren’t uncommon in our country.

We just have to look at the police records. In the fiscal year 2072-2073 BS alone, 124 suicides throughout the country were committed by youngsters under the age of 16. Whereas the number of suicides between the 16-25 year old age group was 1179. Also we are barely five months into 2017 but we have already had three suicides in schools around our valley.

People like chairperson of NPABSON, Karna Bahadur Shah spoke of how this serves as a stark reminder of our children’s vulnerable state of mind. He also stressed on the need to offer them safer sharing havens to talk about their problems and worries. He along with many other school representatives also agrees that as teachers they need to be more wary about their teaching and counseling approaches.

As Bishnu Bhusal, vice principal of Little Angels School put it, “What with social media exposures, more competitive rankings and thus, added pressure as students, we can’t afford to underestimate the growth in their stress level. Then there is the influence of family and friend circles. We obviously need to keep a keen eye on them.”

Perhaps it’s the reason we see some schools finally starting to hire counselors for their students. But then again, these tragic suicides continue to occur.

Sister Mariott, the current acting Principal of St. Mary’s School, where one of those three suicide cases had happened also gives her opinion on the incident. The school has had a counselor ever since the earthquakes. She informs us that they have also regularly carried various awareness campaigns. She refrains from revealing any personal information of the student but states, “We don’t know what happened in this particular case.”  Her conclusion is that the best the school can do is to continue making awareness campaigns for students and trainings for teachers a priority.

Yojana Khatiwada, former English teacher and supervisor, relates with the confusion that the Sister and her faculty might be feeling. Four years ago, one of her student too had committed suicide. The unnerving thing was that, just two or three days before the tragic incident, she remembers spotting the pupil crying at the school premises so she had consoled her.

Khatiwada says they had had a long talk for nearly four periods. She also adds, “I left her with a smile on her face. I was content that our talk had helped her to an extent. She assured me that she would find me if there were any other concerns worth discussing. ”
But clearly, that wasn’t the case.

Child psychiatrist, Dr Arun Kunwar, who was compelled to open a suicide hot line in 2014 after seeing the frequency of suicide news, tries to explain the current scenario.
“My patients come to me stating that they ‘failed to control’ the way they are feeling. It seems many including youngsters have had people tell them that they can control these emotions and their situation if they put some effort into it. Basically, they have been asked to get their act together. Society is making it a morality issue.”

So, Dr Kunwar wants to make it as clear as possible. In reality, this is unattainable. You can’t control these urges on your own. It all goes back to the initial motive of his suicide prevention campaign: to let people know that if you are thinking of hurting yourself or anyone else, it is not normal. You need help.

This struck a chord with Astha as well. Even though all those who were having a hard time at school were not cutting themselves, by the time she left school, she reveals that she knew at least 10 other students who were doing some or other kind of self harm.

Away from their parents’ and teachers’ watchful gaze, there apparently was a lot that used to go on. She also vividly remembers the nonchalant attitude towards it all.
“In hindsight, I realize that to an extent, many were romanticizing the whole thing. Being broken and damaged was cool in a way. Others though had a fair share of real problems,” shares Astha, adding that more often than not, it used to be some kind of family or boyfriend concerns.

All these are symptoms that could very well snowball into suicide attempts, a fact which is underestimated in our society. For example, the time around S.L.C results always brings about a couple of suicide reports and we have always been taking the reason at face value. We automatically assume that they commit suicide because of their poor results.

Dr Kunwar, though, begs to differ. “The result is merely the catalyst,” he explains, “we have to ask ourselves, there are hundreds of students who fail the S.L.C exam every year, so why is it only a handful who choose to kill themselves ?”

Suicide is never an easy decision. According to Dr Kunwar, these people already have pre-existing conditions that are further aggravated by their environment. More than 80 per cent tend to have psychological problems ranging from depression, anxiety to even chronic stress. Usually, suicide isn’t a decision that is taken at a moment’s notice. He bets that the victim will have entertained the thought multiple times before, for weeks and months at end.

However, at the same time, what makes, pre-teens and teenagers more vulnerable to suicide is their inhibited nature. There have been many documented cases of impulsive suicides among youngsters.

Dr Kunwar further elaborates, “At that age, we find that, they don’t really care about consequences. The way they are more prone to start smoking or shop lifting, instances when they feel emotionally overwhelmed can lead to tragic endings like suicide.”

We could even take Astha’s case. If she had got her hands on more effective pills than paracetamol, there is no telling what the outcome could have been. Dr Kunwar also notes that if we had been able to diagnose and treat the recent school suicide victims, we might have been able to save them as well.

It’s needless to mention how schools can play some part in helping prevent suicides by spreading correct information about mental issues and its treatment.

In Khatiwada’s experience, a teacher, needs to put a lot of effort in order gain a student’s confidence. Despite their earnest intention, making students open up about their problems isn’t an easy feat. Not only did she learn it from her student’s suicide incident. Even after that, over the years, she claims, she needed to tirelessly follow up on a couple of students, only to find that they too were going through similar circumstances.

“As a teacher, it’s crucial to be a little more sensitive towards our students’ actions. Their behaviors can tell you a lot,” says Khatiwada. But then again, she also knows, that the difficult part is yet to come. So she also stresses on awareness.

If a fifth grader has to read and learn about our anatomy in their syllabus, complicated things like the respiratory system and the cardiac system , then surely these youngsters would also benefit from a couple lessons on mental health issues.

Silence not befalling in social media during election silent period

KATHMANDU, May 12: Although we are in silent period mandated by the election code of conduct, it appears that people,... Read More... 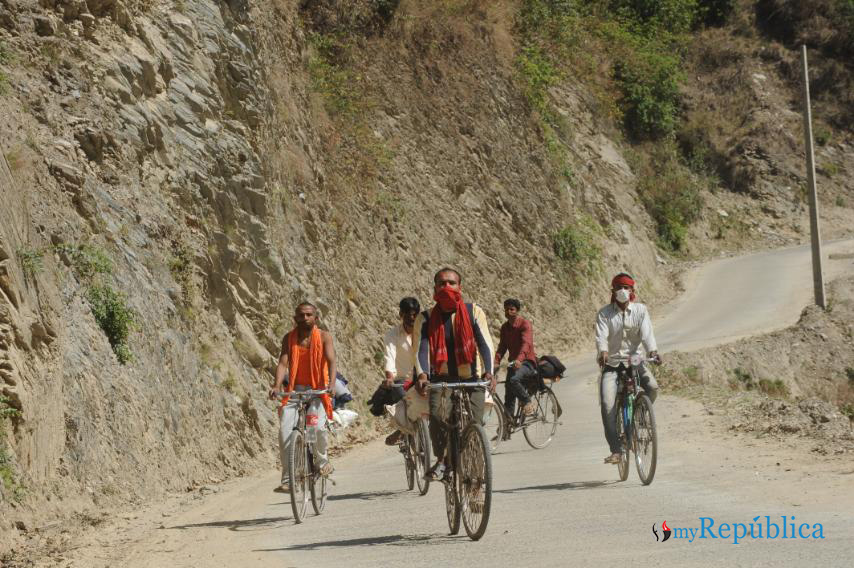