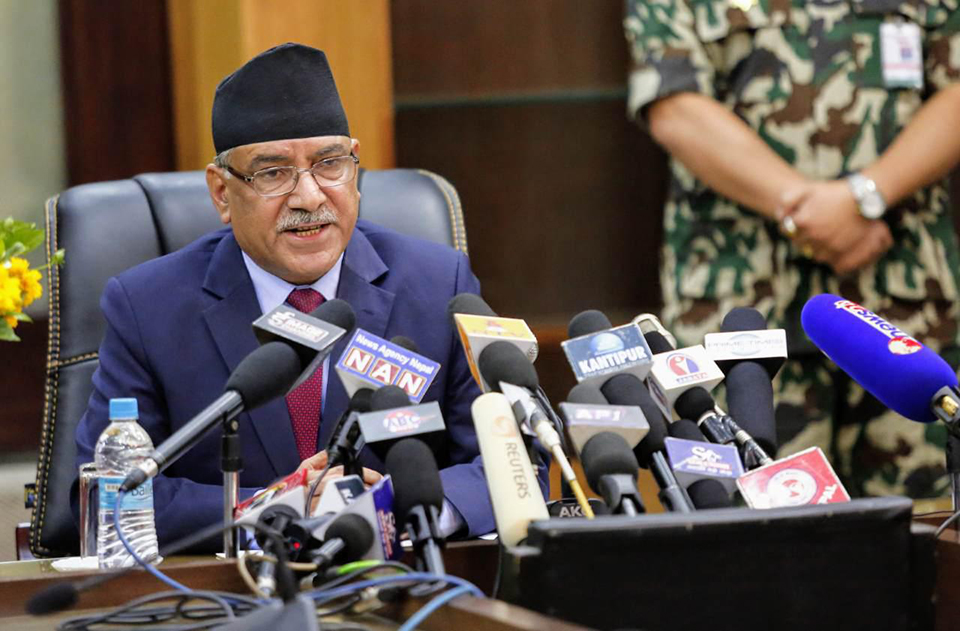 KATHMANDU, May 24: Prime Minister Pushpa Kamal Dahal  has resigned from  his post on Wednesday.

In a televised addres to the nation, Dahal  briefed the nation on the achievements made during his stint as the prime minster  before announcing his resignation.

Addressing the nation, Dahal boasted about playing a significant role to building up social harmony between Tarai, Hill and the Mountain and improving trilateral relations among Nepal, India and China.

Signing the the China-proposed ambitious project One Belt One Road (OBOR) Initiative was an another  important achievement made during my premiership, said Dahal.

He further said  that the country will generate 200 megawatt electricty within 1 year, 600 megawatt in 2 years and within 3 years 1,200 megawatt.

Similarly, the long-held dream of Kathmandu Valley denizens to drink Melamchi water is going to be fulfilled by October this year, Dahal said.

"The fast-track and the postal highway projects which were the major issues of political discourse but had not fallen into the priority of any previous government became possible during my leadership. The Nepal Army is going to build the fast-track which connects Tarai and Kathmandu  Valley ," said Dahal.

He did not forget to mention that his able leadership made it possible to hold the first phase of local level elections that had not been held for the last 20 years.

Dahal had been elected as the 39th Prime Minister of Nepal on August 3 in 2016 at the backing of Nepali Congress, the largest party in the House, United Democratic Madhesi Front and some other fringe parties.

NC and CPN (Maoist Center) had reached a seven-point deal to bring down then KP Sharma Oli-led government and form a new one under the leadership of PM Dahal on July 12. According to the agreement signed between the two parties, former Maoist leader Pushpa Kamal Dahal would lead the government for the first nine months.

Thereafter, Prachanda would hand over the leadership to Nepali Congress President Sher Bahadur Deuba. As per the agreement, Prachanda was supposed to hold local level elections, while Deuba would hold elections to the provincial assemblies and Parliament during the remaining nine months.