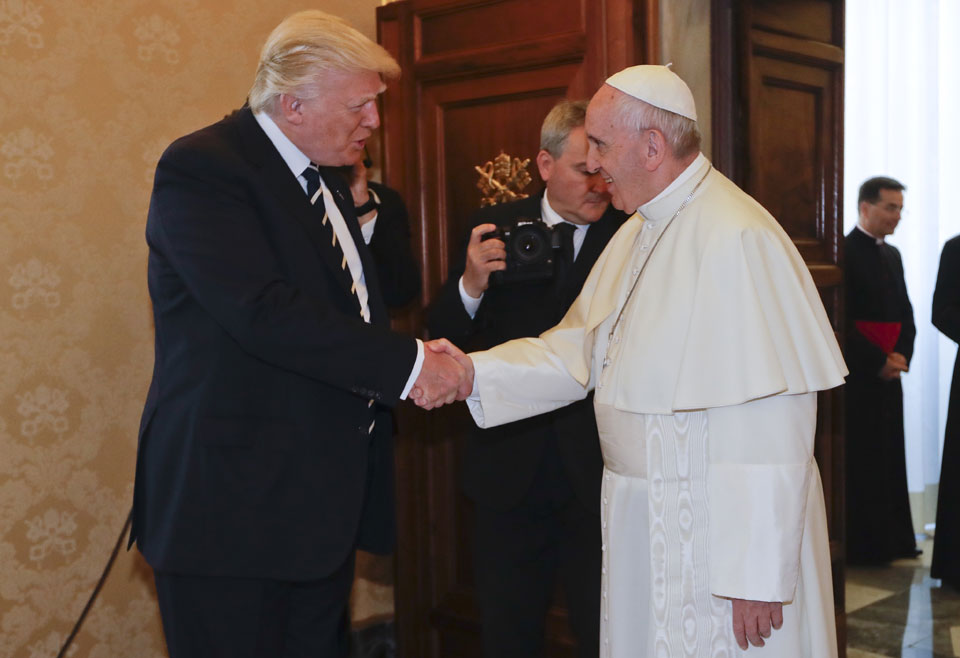 VATICAN CITY, May 24: President Donald Trump met with Pope Francis, the famously humble pontiff with whom he has publicly clashed, concluding his tour of the ancestral homes of the world's three largest monotheistic religions.

Trump, midway through his grueling nine-day maiden international journey, called upon the pontiff at the Vatican early Wednesday where the two had a private 30-minute meeting laden with religious symbolism and ancient protocol. The president, accompanied by his wife and several aides, arrived at the Vatican just after 8 a.m. local time. The president greeted Francis in Sala del Tronetto, the room of the little throne, on the second floor of Apostolic Palace Wednesday morning.

The men shook hands and Trump could be heard thanking the pope and saying it was "a great honor" to be there. They then posed for photographs and then sat down at the papal desk, the pope unsmiling, as their private meeting began.

It ended a half hour later when Francis rang the bell in his private study. The pontiff was then introduced to members of Trump's delegation, including his wife Melania, his daughter Ivanka and son-in-law Jared Kushner, as well as aides Hope Hicks and Dan Scavino. As is tradition, the pope and president then exchanged gifts.

The meeting could provide powerful imagery to Catholic voters back in the United States as well as the possibility for conflict between a president and a pope who have not often seen eye-to-eye.

The two men's often opposite worldviews collided head-on early last year, when Francis was sharply critical of Trump's campaign pledge to build an impenetrable wall on the Mexican border and his declaration that the United States should turn away Muslim immigrants and refugees.

"A person who thinks only about building walls, wherever they may be, and not building bridges, is not Christian," Francis said then. The pontiff has been a vocal advocate for aiding refugees, particularly those fleeing the violence in Syria, deeming it both a "moral imperative" and "Christian duty" to help.

Trump has never been one to let an insult, perceived or real, go by without a response, and he made no exception for the world's best-known religious leader. He called Francis "disgraceful" for doubting his faith.

And even the pontiff's congratulatory message sent to mark Trump's inauguration contained a sly reference to their disagreement, as the pope wrote that he hoped the United States' international stature would "continue to be measured above all by its concern for the poor, the outcast and those in need."

Trump arrived in Rome Tuesday evening, his motorcade closing a busy Italian highway just after rush hour and prompting hundreds of onlookers to briefly step out of their gridlocked cars to gawk at the fleet of armored vehicles. He spent the night at the U.S. ambassador to Italy's residence.

Though both Trump and Francis are known for their unpredictability, papal visits with heads of state are carefully arranged bits of political and religious theater that follow a specific program, with little room for deviation or unwanted surprises. Trump was expected to be given a tour of the Vatican after he arrived and then meet with the pontiff in his library. The two men were to be left alone with a translator to hold a private discussion before emerging again to exchange gifts and farewells.

Trump is the 13th president to visit the Vatican and, as part of his tour, he will view the Sistine Chapel.

In recent days, Francis and Trump have been in agreement on a need for Muslim leaders to do more against extremists in their own communities. But there are few other areas where their views align.

The president's prior anti-Muslim rhetoric — including his musing that Islam "hates" the West — is the antithesis of what the pope has been preaching about a need for dialogue with Muslims. Francis also differs sharply with Trump on the need to combat climate change and economic inequality. And he could react to events this week, including the release of Trump's budget, which would dramatically cut funding to programs that help the poor, and the president's agreement to sell military equipment to Saudi Arabia,.

Still, experts believe it unlikely the outspoken pope will do anything but be welcoming during his first meeting with Trump. The pontiff said last week he would "never make a judgment about a person without hearing him out" and some Vatican observers suspect he will hold his tongue, at least for now.

"I think that the climate (of the meeting) will be quite good. Because I think there is a mutual interest to close all the polemics of the past and to start working together," said Massimo Franco, author and political analyst for leading daily Corriere della Sera. He also said the thought a successful staging of the visit could provide Trump with a good news storyline to briefly overshadow the tumult back home over the firing of his FBI director and the ongoing Russia probe.

Trump's visit to the Eternal City comes after two stops in the Middle East where he visited the cradles of Islam and Judaism. In Saudi Arabia, he addressed dozens of Arab leaders and urged them to fight extremists at home and isolate Iran, which he depicted as menace to the region. And in Israel, Trump reaffirmed his commitment to strong ties with the nation's longtime ally and urged both the Israelis and the Palestinians to begin the process of reaching a peace deal. No details or timetable have yet to be established for negotiations.

But while Trump received extravagantly warm welcomes in Riyadh and Jerusalem, the reception could grow much cooler now that he's reached Europe, site of widespread protests after his election. Climate change activists projected the words "Planet Earth First" on the massive dome of St. Peter's Basilica at the Vatican Tuesday night and protests are expected Wednesday in Rome and later in the week when Trump travels to Brussels for a NATO meeting and Sicily for a G7 gathering.

Pope Francis has denounced abortion as the "white glove" equivalent of the Nazi-era eugenics program and urged families to accept... Read More...