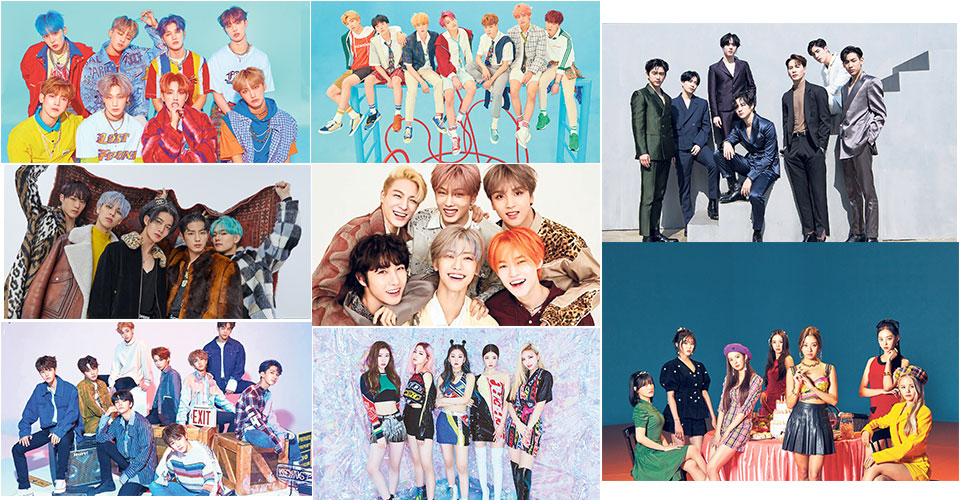 2019 was an action packed year for K-pop. Although the year will be remembered by many as one of the saddest in K-pop history because of the many disbandments, members ominously leaving their groups, many scandals and, most importantly, the passing of two big stars, Sulli and Goo Hara, 2019 K-pop also had its fair share of high moments—especially in music. Here are some highlights.

Best concept, Ateez
I don’t think there’s a specific word to describe Ateez’s concept. It’s pirate-y, cowboy-ish, dark, sleek, and a little creepy. But whatever it is that their management team is doing to the groups’ concept, it’s clearly working because this year Ateez has accumulated many fans for their concept alone. Their breezy summer release Wave strayed from this concept but the b-side promoted alongside it, Illusion, continued with the pirate-y theme in a lighter and more colorful tone. My favorite take on their concept was for HALA HALA and Say My Name, their first two releases from last year.
Honorable mention: Itzy

Most cohesive, CIX
As much as I love how experimental and all over the place K-pop is with everything, there are times when I crave a little cohesion. And no other K-pop act was as cohesive as CIX this year. From their concept to the outfits and choreography, everything about this rookie boy group went well together. Especially the tracks in the two EPs they released last year—Hello Stranger and Hello Strange Place. Even though the group has its fair share of fans because a few of its members were already well known prior to CIX’s debut, I still consider them to be the underrated rookies from last year amidst all the hype Itzy, Txt and X1 got.
Honorable mention: Jus2

Most chaotic, Stray Kids
I’m calling Stray Kids chaotic in the most affectionate way possible. Last year was great for them career-wise. They released five singles, two EPs and a reissue album, and went on two concert tours. I loved everything they came out with last year—especially the chorus drop in Miroh, the Side Effects choreography and the playful satire in their recent release, Gone Days. But something the group was criticized a lot for was the noisy and distorted nature of their music. While I do admit all the singles they promoted in 2019 (not counting Gone Days) sound a little chaotic, I say it is noise music done tastefully.
Honorable mention: Itzy

Best idol variety show, Run BTS!
Though Run BTS! is the first idol variety show I started watching, I still think it’s the best one out there. Watching these kinds of shows is a great way for fans to know the idols and their personalities. I personally enjoy watching them play around a lot. In 2019, we got about 35 episodes of the show and each episode was as enjoyable as the next. NCT Dream’s Save NCT Dream, Seventeen’s Going Seventeen, Ateez’s Wanted, and Stray Kid’s Two Kids’ Room (now rebranded as One Kid’s Room) are some other idol shows I enjoyed a lot last year.
Honorable mention: Save NCT Dream

Most matured, NCT Dream
It’s a little hard to believe that five out of the seven original NCT Dream members won’t be in the group this year. With all four 2000 liners (Renjun, Jeno, Haechan and Jaemin) graduating, the group will have a completely new lineup led by Chenle and Jisung (the two remaining members of the original lineup) this year. NCT Dream’s last comeback with We Boom was a huge hit both in South Korea and internationally. The group left behind their catchy bubblegum sound for a more edgier one. Stronger, the b-side they promoted alongside the title track, Boom, develops this edgy coming-of-age sound further.
Honorable mention: Twice

Prettiest pants, Itzy
The fashion (both on and off stage) was one of the key factors that got me into K-pop. And last year, few stage outfits made me as happy as seeing Itzy’s amazing pants collection. The quintet wore a variety of baggy, billowy, high-waisted, slit, grunge and flared pants while promoting their two singles—Dalla Dalla and Icy, and I loved every pair of pants I saw these girls wear. Their onstage style is cool, experimental and edgy with hints of girly-ness—completely on par with the sound they represent. Besides Itzy, other groups who also wore memorable pants onstage include Mamamoo, CIX, (G)i-dle and Blackpink.
Honorable mention: CIX

Craziest choreography, Got7
Choreography and performance are just as important as music in the K-pop world. And last year we saw a lot of complex and cool choreographies. In this mix of fantastic dancing and choreography, Got7’s choreography for both of their title tracks—Eclipse and Callin’ My Name—stood out the most for me. Jaebum and Bambam spinning around holding each other’s hands representing the spinning top theme of their album in Eclipse and Jaebum starting out Callin’ My Name on the floor turning around stepping on each member’s foot one-by-one were the highlights of the two choreographies for me.
Honorable mentions: TXT, Ateez, Itzy

Most consistent bops, CLC
CLC were surprisingly very busy last year. They released three title tracks and an EP, and were on music shows promoting a new single every three months or so. After their year-long hiatus following the release of 2018’s Black Dress, the group started off 2019 with the striking female empowerment themed single NO which got them their first music show win. They went on to release ME in the summer that followed NO’s confident dance track direction. Their last release of 2019, Devil, takes a break from the direction of the previous two singles and plays around with retro pop sound instead.
Honorable mention: Ateez