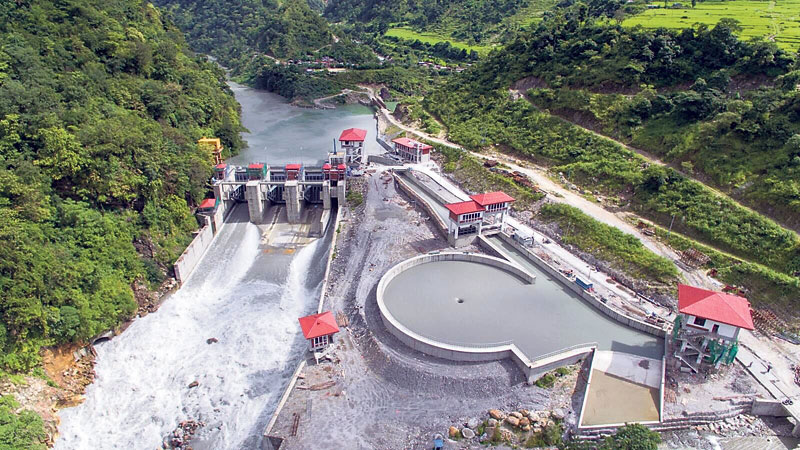 Two plants of Nepal Electricity Authority (NEA), having combined capacity of 44 MW, are starting generation in 2017, while projects developed by independent power producers will add a minimum of 200 MW to national grid this year, according to a projection made in the National Energy Crisis Prevention and Electricity Development Decade (2016-2026) document.

Others say that power generation in 2017 could go even higher.“"If Upper Trishuli 3A (60 MW) starts generation this year, the figure will go even higher”" Gokarna R Pantha, spokesperson of the Ministry of Energy, said, quoting the document.

The 99-point document was unveiled in February last year with the target of eradicating load-shedding in two years, and generating 10,000 MW in the next 10 years.

Hydropower plants across the country are generating 846 MW at present, according to details updated in the website of Department of Electricity Development on December 28, 2016.

NEA hopes to complete the Rasuwa-based Upper Trishuli 3A plant this year.

"Though many projects are preparing to start generation, the chances of energy going waste are high as transmission lines are not being developed in the same pace," added Guragain.

He, however, is hopeful that Minister for Energy Janardan Sharma will put focus on transmission line projects many of which are already behind schedule.

NEA is the only authority in the country to build transmission line.

From acute energy shortage to end of load-shedding
Energy crisis was at its peak when the year 2016 began. Amid shortage of cooking gas, people switched to electricity for cooking.  Now, life has improved with the end of load-shedding which was been in place for over a decade

With load-shedding coming to end, industries, though barred to operate during evening peak hours, are mulling over expanding their capacity. Similarly, hotels are reported rise in profits with diesel consumption to power big generators coming to zero with the end of load-shedding. Ministry of Energy has estimated that saving from diesel will be worth Rs 16 billion a year.

Taking a leaf from the fuel crisis that the country saw during last year's Indian blockade, the government has pledged to generate more energy for self-reliance. In the decade-long plan announced earlier this year, the government announced to end load-shedding in two years and generate 10,000 MW within a decade.

The plan document drew positive response from all quarters. The country started importing additional 80 MW through Dhalkebar-Mujaffarpur Transmission Line as a contingency plan as the substation at Dhalkebar was not ready to import electricity.

The country started seeing positive changes after Minister for Energy Janardan Sharma promoted Kulman Ghising to the post of managing director of NEA. Ghising brought unexpected changes in electricity supply and uninterrupted power supply in October caught many by surprise. He focused on demand-side management and strengthened existing supply systems, among others.

Minister Sharma has also instructed officials to expedite undergoing hydropower projects like Kulekhani III, Upper Trishuli 3A and Chameliya as well as Dhalkebar substation and several other transmission line projects.

Country to see record addition of hydropower in FY2017/18