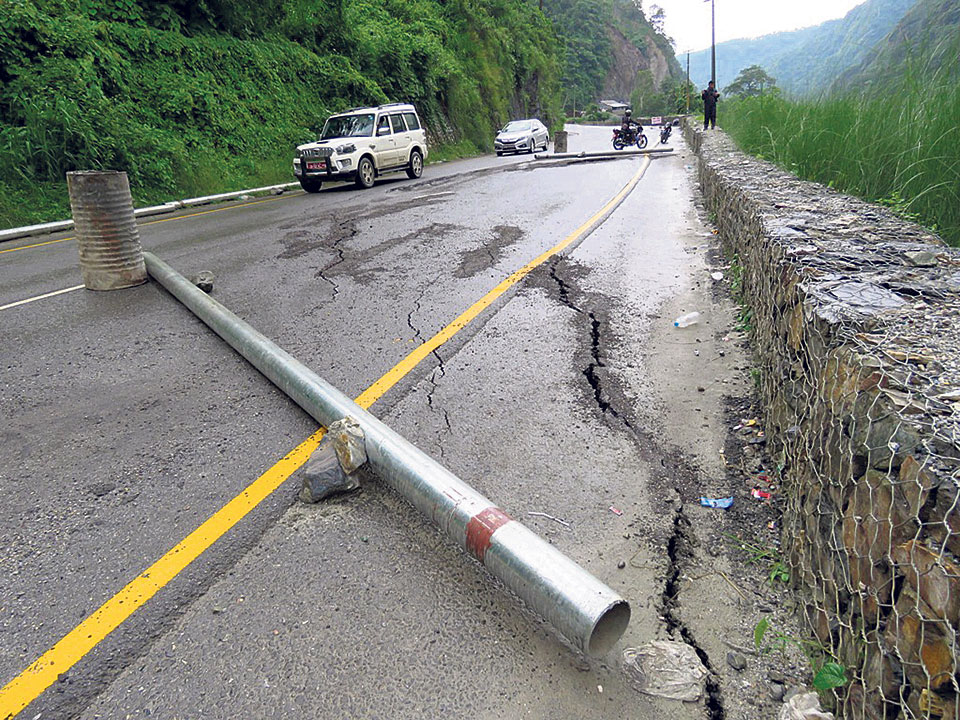 A 20 meters length of the Narayanghat-Mugling road has subsided about 1 foot near Gaighat. The picture was taken on Wednesday. Photo: Sabita Shrestha/Republica

CHITWAN, July 12: A 20 meters length of the newly-widened Narayanghat-Mugling road subsided about 1 foot near Gaighat on Tuesday evening. Traffic has been made one-way along the damaged section.

As informed by engineer Shiva Khanal, who is also the information officer of the Narayanghat-Mugling Road Project, about 1 foot road has subsided near Gaighat, which is around 17 km from Narayanghat toward Mugling. Recently, the road had been upgraded into two lanes as per the Asian standards. “Around 20 meters long and five meters wide section of the road has subsided 1 foot,” said Khanal, adding,”We have allowed only one-way vehicular movement in the damaged section.”

We have yet to ascertain why the road sank even before the completion of the construction, say engineers. A team of experts inspected the damaged section on Wednesday. “We are trying to figure out the cause of the subsidence,” said information officer Khanal.

Earlier, a 50-meter section of the road had subsided at Bhateri near Jugedi. That subsidence has pushed the wall of the road outward, according to engineer Khanal. It has been learnt that the road project’s consultant has directed the contractor to repair the damaged sections. While expanding the seven-meter wide road to 11 meters, there had been heavy use of mud, which could have caused the subsidence, according to locals.

The road expansion work was started three years ago, but it could not be completed on time due to various reasons. The project’s deadline has already been extended four times. According to Khanal, around 95.4% of the expansion work has been completed so far. Several construction companies are working on the project. The fourth deadline expired on May 28 and the contractor is requesting yet another extension.

Landslides have been a serious problem in the Narayanghat-Mugling road, which is one of the busiest road sections of the country.

RATNANAGAR, Aug 4: The Narayangadh- Mugling road section which was blocked due to a landslide at Ghumaune of Bharatpur Metropolitan... Read More...

BIDUR, March 7: One person was killed and five others were injured in a mini truck accident at Kulkule of Thaprek... Read More...