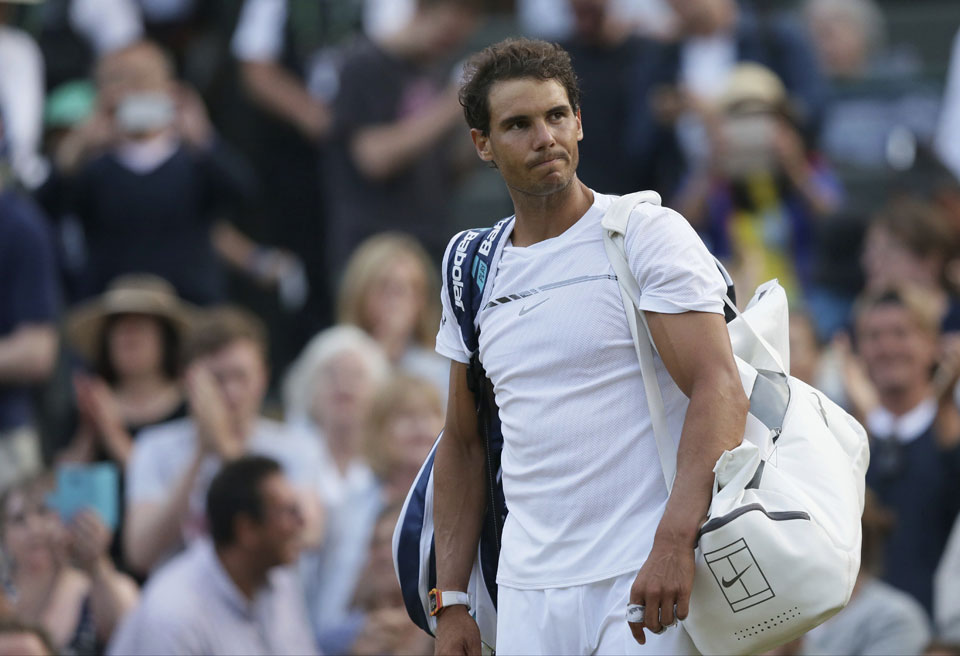 LONDON, July 11: Rafael Nadal kept getting pushed to the brink of defeat. He kept resisting.

He dropped the first two sets, then won the next two. He erased two match points in the riveting fifth set's 10th game, then another two in its 20th game. Only when his fourth-round match against 16th-seeded Gilles Muller of Luxembourg stretched past 4½ hours, the sunlight fading, did Nadal blink.

"I played with the right determination, right passion, right attitude," Nadal said, "to win the match."

But he could not pull through, extending his drought without a quarterfinal berth at the All England Club to six years.

"Just tried to hang in there," Muller said. "Still kept believing. Yeah, somehow in the end, I made it."

All of those losses, except Monday's, came against men ranked 100th or worse. The 34-year-old Muller is not exactly a giant-killer: He had lost 22 consecutive matches against players in the top five. And he'd only reached a Grand Slam quarterfinal once before, at the 2008 U.S. Open.

Now Muller, who also beat Nadal at Wimbledon in 2005, will get a much-needed chance to recover before facing 2014 U.S. Open champion Marin Cilic in Wednesday's quarterfinals.

Other men's quarterfinals: defending champion Andy Murray against Sam Querrey of the U.S., Roger Federer against Milos Raonic, Tomas Berdych against Novak Djokovic or Adrian Mannarino. The Djokovic-Mannarino fourth-rounder was postponed until Tuesday; it had been scheduled for No. 1 Court after Nadal-Muller concluded.

But that duo played on and on, past 8 p.m., when the descending sun's reflection off the arena bothered Nadal so much that he held up action; chair umpire Ali Nili asked spectators to stand in the way and block the rays. A few games later, Nili told fans to stop doing the wave, suggesting they wait for the next changeover so play could proceed.

Hours earlier came what might be interpreted as a bad omen for Nadal: Going through his prematch rituals on the way to the court, he jumped up so high that he banged his head on the doorway's transom. He staggered back a bit, then tried to laugh it off, before rubbing the top of his head.

After all, until Monday, Nadal hadn't lost a Grand Slam set since the fifth of the Australian Open final in January against Federer. From the outset of the French Open — where he won a record 10th championship last month — and through his first three matches at Wimbledon, Nadal won 28 consecutive completed sets at the majors. Healthy and playing terrifically, Nadal seemed poised to again be a factor at the All England Club.

After losing two sets in the opening 75 minutes against Muller, Nadal adjusted. He stepped a little farther behind the baseline to give himself more time to react. He also fared better on his own serve, finishing with 23 aces, an unusually high total for Nadal and only seven fewer than Muller.

So they headed to a fifth set, which was masterful, filled with brilliance from both.

Still, things were not looking good for Nadal when he served while down 5-4 and double-faulted to trail 15-40. But Nadal deflected those initial two match points for Muller with an ace and a service winner. Muller's next two match points came at 10-9: Nadal deleted the first with a volley winner, and the second disappeared when Muller shanked a return.

"It was not easy," Muller said, "to keep believing."

One key: Nadal converted only 2 of 16 break points. That included going 0 for 5 in the fifth set, four in one game, and was a big reason that the No. 4-seeded Spaniard lost despite remarkable totals of 77 winners and 17 unforced errors.

"When you are in the fifth, against a player like him, (the outcome) just depends on a few balls," Nadal said.

The fifth set alone lasted 2 hours, 15 minutes, until Nadal pushed a forehand long, meaning he would not manage to complete what would have been his fourth career comeback from two sets down.

Instead, it was Muller who was able to enjoy a win that seemed to be slipping away.

LONDON, July 6: Madison Brengle knew, of course, that her opponent, Petra Kvitova, was a two-time Wimbledon champion and a... Read More...

LONDON, July 15: Novak Djokovic is back at his best and the Wimbledon champion for a fourth time, grabbing a... Read More...

Can I get ‘long COVID’ if I’m infected after vaccination?
27 minutes ago