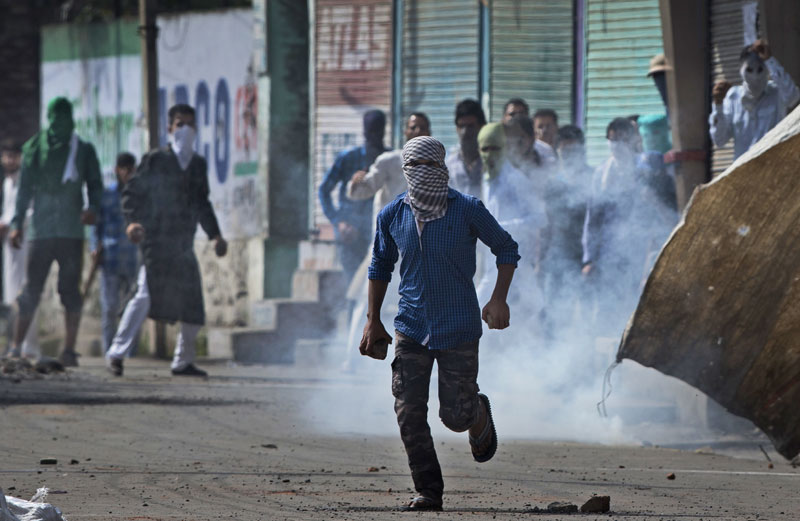 SRINAGAR, India, Sept 13: Two anti-India protesters were killed and scores were injured in clashes with security forces in the Indian-controlled portion of Kashmir on Tuesday, police said, as a security lockdown marred Eid festivities in the disputed region.

Security forces fired tear gas and shotgun pellets to quell protesters in several places, including Srinagar, the main city, police said. Protests took place in dozens of areas in the region, which has been wracked by massive demonstrations since July.

A curfew was in effect in the entire Kashmir Valley, and most people stayed indoors for the Islamic festival of Eid al-Adha, which fell on Tuesday. Usually bustling on such occasions, Srinagar's marketplaces were deserted.

Authorities did not allow congregational Eid prayers in the main mosques and Eid grounds in the predominantly Muslim region, but prayers were held by people in small neighborhood mosques.

A protester was killed by a tear gas shell in the northern area of Bandipora, a police officer said on condition of anonymity because he wasn't authorized to talk to reporters. Another protester was killed by shotgun pellets in Shopian in the south, he said. At least 60 people were injured in clashes in 10 different places in the region.

The curfew seemed to have foiled a planned march called by separatist leaders to the Srinagar office of U.N. military observers, which monitors a cease-fire between India and Pakistan. The rivals have fought two of their three wars over control of Kashmir, which is divided between them and claimed by both.

Most Kashmiris want an end to Indian rule and favor independence or a merger with Pakistan.

The largest street protests the region has seen in years followed the killing of a popular rebel leader by Indian security forces.

At least 79 civilians have been killed and thousands wounded in protest-related violence, mostly by government forces firing bullets and pellets. Two policemen have also been killed and hundreds of others injured in the clashes.

Curfews, a series of communication blackouts and the deployment of tens of thousands of Indian soldiers have failed to stop the protests against Indian rule.

Hindus continue pilgrimage in Kashmir after 7 die in attack