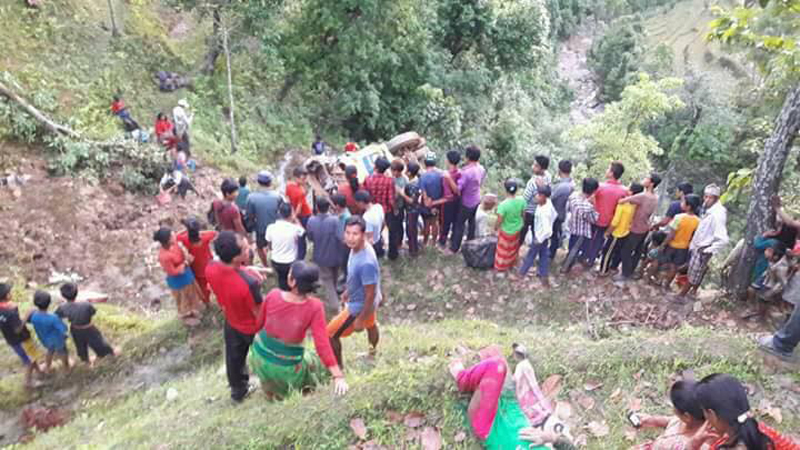 DHADING, March 28: At least four people have died and over 25 others sustained injuries in a bus accident at Bhakare of Golabhanjyang in Nilkantha Municipality-10 of Dhading district on Sunday evening.

The ill-fated school bus (Ga 1 Kha 3805) was transporting passengers at the time of accident.

The bus was heading to Khahare from district headquarters Dhadingbesi. It fell down some 200 meters off the road, authorities informed. The accident site is a remote area.

The rescue efforts initiated by the locals was been backed by police and a medical team from the district headquarters, which arrived in the accident site a few hours later.

Although the cause of the accident is not known yet, bad road condition has been suspected as the reason behind the mishap. As of Sunday evening, the identities of the deceased have not been identified. All the deceased are female, confirmed local rescuers.

The injured passengers have been taken to Dhading District Hospital. The hospital had provided three ambulances to transport the injured. Some of the injured were also transported to the hospital on public vehicles.

CHITWAN, Nov 29: Six people were killed and 18 others sustained injuries when a passenger bus plunged 1000 meters into the Trishuli... Read More...

CHITWAN, July 27: Eight persons were killed and 17 injured when the bus they were travelling in collided with a truck... Read More...

KATHMANDU, Oct 28: Prime Minister Sher Bahadur Deuba has extended deep sorrow over the death of many people in a... Read More...