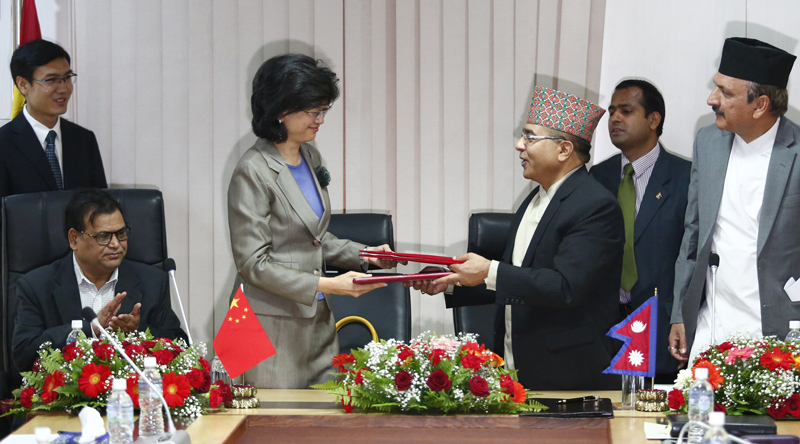 Will Nepal act only as a bridge to ferry goods between China and South Asia, or will its exports also be facilitated on preferential basis?

Nepal’s delayed and largely unprepared decision to sign the OBOR framework agreement in the lead up to the OBOR conference in Beijing (May 14 and 15) has dismayed many well wishers of Nepal in and outside the country. There was not much doubt Nepal would ultimately sign the agreement and participate in the high-profile conference given that it was proposed by one of our close and powerful neighbors and had components that are potentially beneficial for Nepal’s development and for its international image. Additionally, Nepal had already inked a preliminary OBOR agreement in 2014.

But there should have been more preparation on specifics of the initiative between 2014 and 2017. The goal should have been to maximize benefits for the Nepali people, who have not been able to enhance the quality of their lives even though they live in the middle of two of the fastest growing economies in the world. We may, therefore, have to use our collective wisdom to fully benefit from OBOR in line with the dictum “better late than never”. In this context, six issues are of great importance from Nepal’s perspective.

First is securing rail link and access to suitable ports in China and within the OBOR network across Asia, Europe and Africa. Second, getting China’s formal commitment against “free trade”, given Nepal’s minuscule Nepali trade and economy compared to the gigantic Chinese one. Third, getting China to agree to invest in US dollar and Nepali currency rather than the Chinese Yuan. Fourth, developing and strengthening the vision, the underlying projects, the institutions and the requisite human resources to fully benefit from the mega initiative. Fifth, paying adequate attention to geopolitics and advice of regional and global powers on OBOR. Nepal must act on these promptly.
While government ministers and officials have disclosed some details on the status of negotiations on connectivity, banking, currency, trade, etc, they must be more open so that professionals, experts and even common folks may pitch in their inputs to make OBOR beneficial to Nepal, China and other participants.

Nepal has reportedly told China it can’t sustain “custom and duty-free access to thousands of Chinese goods” and that investment in Nepali Rupees or US dollar is important. Additionally, “access to Chinese ports, including one near Iran, and rail and road links will be negotiated with China later”. However, promptly arranging for rail link with China is a must to promote Nepali exports and minimize ever-increasing trade deficit as a part of OBOR.

Interestingly, while the government was sluggish in its preparation, the first OBOR-Nepal Conference (2017) that saw the participation of Chinese and Nepali professionals and officials had given eight suggestions through its declaration on January 19: 1) Proactively establish people-to-people communication to develop Nepal as a bridge between China and South Asia, 2) Get China and India to agree to trilateral cooperation, 3) Better integrate South Asian countries, 4) Develop Nepal-China Economic Corridor, 5) Forge strategic partnership through private sectors, 6) Activate public diplomacy and knowledge partners/institutions to better connect peoples, 7) Use Buddhism/Lumbini to enhance Nepal-China tourism and understanding, and finally, 8) Make OBOR-Nepal Conference an annual event to remind authorities of such declarations. However, the so-called experts from Nepal and China failed to include critical issues such as free trade, currency for investment and rail link in the declaration.

At this point, it may be relevant to restate that the OBOR concept was floated by Chinese President Xi Jinping in 2013. In Boao Asia Forum 2015 he clarified that “the building of the Belt and Road shall adhere to the principles of joint consultation, joint building and joint sharing, since it is open and inclusive rather than closed; it will not be a solo of China by itself, but it will be a chorus participated in by many countries along the Belt and Road.” Nepal is one of the 64 countries taking part in OBOR. It is a debt-based infrastructure project rather than free foreign aid initiative or simply a network of trade activities.

The OBOR is thus not above criticism. “China’s plan to build ports, roads and railways in under-developed Eurasia and Africa is mainly out of political motivation rather than real demand for infrastructure”, according to the Fitch Ratings. It also says OBOR is a way to extend Chinese influence at the expense of the US. It is a “masterstroke by China to establish itself as a world-leading economy and to spread its power”, particularly hegemony in the South Asian region leading to “India’s encirclement and eventual isolation”.

According to Tshering Bhutia, the Tibetan Autonomous Region (TRA) acts only as a “bridge” to South Asia, ie the OBOR Initiative passes through Tibet only to trade with neighboring countries. TAR accounted for over “90 percent of China’s foreign trade with Nepal since the opening of the Xining-Lhasa railway in 2006, implying that the railway facilitated the transportation of goods from coastal China to the TAR and on to Nepal”. The BCIM positions “Yunnan as the Chinese hub” for exchanges with India. While the Yunnan route “only connects to Northeast India and the BCIM is currently in a state of uncertainty”.

What sort of cross-border trade will take place through all the “infrastructure construction underway in the TAR”? Will the road and rail network inside TAR merely facilitate transport of commodities from coastal China to Nepal-India, thereby “accentuating the trade imbalance”, or will goods flow both ways? Bhutia stresses that “China is not likely to allow the free passage of Tibetan people in and out of Tibet into South Asia”, primarily to India. So “what are the rails and roads are good for?”
In the end
The OBOR, a mega global initiative, has been promoted primarily to raise China’s global profile and boost its slowing economic growth. But it can also benefit participating countries, which are encouraged to devise their own strategic plans to expand trade for their economic development. But Nepal has not been proactive in analyzing the pros and cons of OBOR and in negotiating projects under it accordingly.

Answers to the following questions may determine how beneficial Nepal’s involvement in OBOR will be: Which infrastructure—rail, road, metro, airport, hydro-power, hotels—under OBOR will bring most benefit to Nepal? Which part of Nepal will or should be covered by OBOR? Will Nepal be only a bridge to ferry goods between China and South Asia, or will its exports also be facilitated substantially, and on preferential basis? Is the US $50 billion that China is reportedly willing to invest in infrastructure in each country of this region within our need and capacity to handle?

Additionally, the China-Nepal Economic Corridor floated by China may be more beneficial if converted into China-Nepal-India trilateral cooperation. But this is unlikely given India’s reservations on OBOR as well as to any trilateral initiative.

Going somewhere? Some places offer trips to the unknown

When Dena Espenscheid answered an advertisement on social media offering a weekend vacation to an unknown destination, her sister warned... Read More...

An ordinary man unknown to the world

“I was born on the same day as King Birendra!” He would announce proudly during the heyday of monarchy. After... Read More...