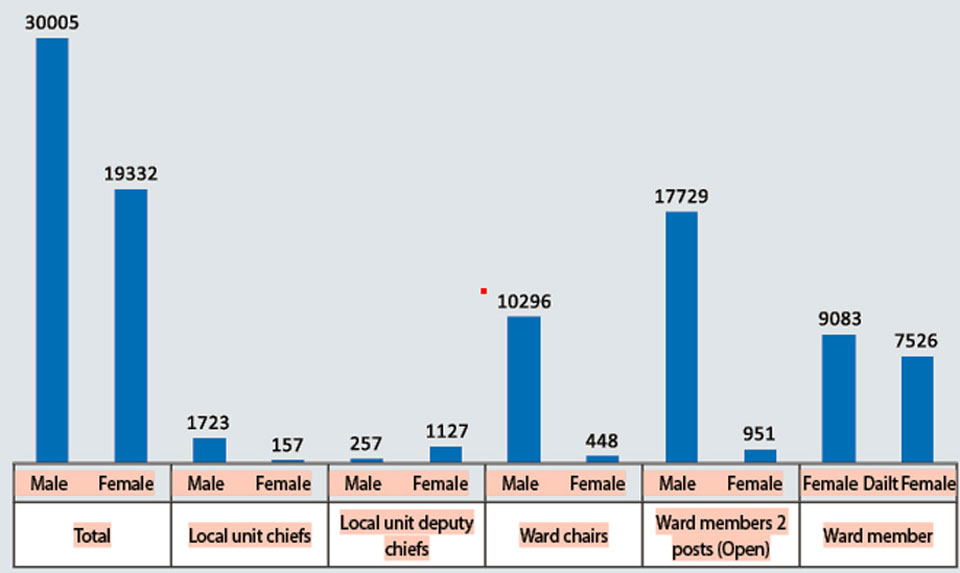 KATHMANDU, May 9: Only eight percent of the total number of candidates fielded for the positions of chiefs of local units -municipalities or rural municipalities - are female even though the election law has made it mandatory to field opposite genders for the chief and the deputy chief of a given unit.

Out of the four members of a ward, two are reserved exclusively for females including one for a Dalit female. Of the total 16,609 women candidates for ward members 7,526 candidates are from the Dalit community.

Details compiled by the election body show that of the total 49,337 candidates contesting in the 283 local units of provinces-3, 4 and 6, the total number of women candidates stands at 19,322 while male candidates number 30,005.

Stakeholders, including election commissioners, have expressed dismay over the nominal representation of women candidates for the positions of local body chiefs. Experts voice concern over the low number of female candidates, saying  it is far less than envisioned by the electoral law.

Experts cite a couple of reasons behind the low number of women candidates. They cite the male-dominant party structures, poor preparedness of women candidates given the gap of nearly two decades since the last elections,  and a sort of hesitation among females to take up  leadership of the 'powerful local units' envisioned under the federal setup.

"Women are merely confined to deputy positions. It's because of our male-dominant party structures," said former lawmaker Pushpa Bhusal of Nepali Congress.

Bhusal, who is also an advocate, said  women leaders were not groomed for the leadership of local units.

For example, no deputy mayoral candidate was fielded by CPN-UML after it entered into an electoral alliance with the Rastriya Prajatantra Party in Kathmandu Metropolitan City. UML  agreed not to field a candidate for deputy mayor after RPP supported UML's Bidhya Sundar Shakya for mayor. RPP's Rajaram Shrestha has been fielded for deputy mayor.

Leaders like Bhusal, however, have taken the maximum number of women candidates for deputy positions as an opportunity to ensure change in  coming days. "Deputy mayors are basically assigned to the judicial functions of  local units. That's why I have taken it as a positive note," said Bhusal adding, "The challenge lies in how to make them [women] technically efficient in that role."

CHITWAN, Jan 25: Nine hundred and thirty out of 2,236 candidates who contested the local level elections in Chitwan district... Read More...