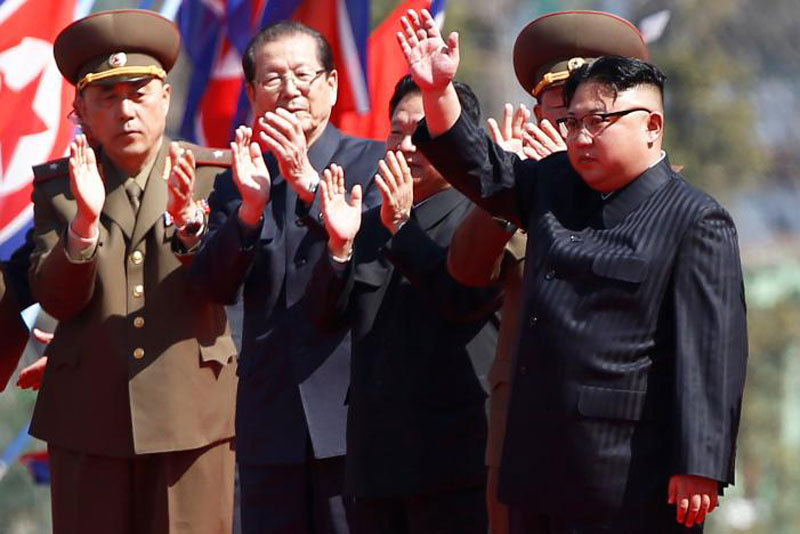 TOKYO, May 8: After arresting two American university instructors and laying out what it says was an elaborate, CIA-backed plot to assassinate Kim Jong Un, North Korea is claiming to be the victim of state-sponsored terrorism — from the White House.

The assertion comes as the U.S. is considering putting the North back on its list of terror sponsors. But the vitriolic outrage over the alleged plan to assassinate Kim last month is also being doled out with an unusually big dollop of retaliation threats, raising a familiar question: What on Earth is going on in Pyongyang?

North Korea’s state-run media announced Sunday that an ethnic Korean man with U.S. citizenship was “intercepted” two days ago by authorities for unspecified hostile acts against the country. He was identified as Kim Hak Song, an employee of the Pyongyang University of Science and Technology.

That came just days after the North announced the detention of an accounting instructor at the same university, Kim Sang Dok, also a U.S. citizen, for “acts of hostility aimed to overturn” the country. PUST is North Korea’s only privately funded university and has a large number of foreign teachers, including Americans.

What, if anything, the arrests have to the alleged plot is unknown. But they bring to four the number of U.S. citizens now known to be in custody in the North.

The reported arrest of another “Mr. Kim” — the North Korean man allegedly at the center of the assassination plot — is more ominous.

According to state media reports that began Friday, he is a Pyongyang resident who was “ideologically corrupted and bribed” by the CIA and South Korea’s National Intelligence Service while working in the timber industry in Siberia in 2014. The Russian far east is one of the main places where North Korean laborers are allowed to work abroad.

The reports say Kim — his full name has not been provided — was converted into a “terrorist full of repugnance and revenge against the supreme leadership” of North Korea and collaborated in an elaborate plot to assassinate Kim Jong Un at a series of events, including a major military parade, that were held last month.

They allege Kim was in frequent contact through satellite communications with the “murderous demons” of the NIS and CIA, who instructed him to use a biochemical substance that is the “know-how of the CIA” and that the hardware, supplies and funds would be borne by the South Korean side.

Kim Jong Un attended the military parade on April 15 and made several other appearances around that time to mark the anniversary of his late grandfather’s birthday.

The initial reports of the plot concluded with a vow by the Ministry of State Security to “ferret out to the last one” the organizers, conspirators and followers of the plot, which it called “state-sponsored terrorism.”

It’s anyone’s guess what a “Korean-style” attack might entail.

North Korea is known for its loud and belligerent rhetoric in the face of what it deems to be threats to its leadership, and the reference to ferreting out anyone involved in the plot could suggest not only action abroad but possible purges or crackdowns at home.

“I wonder if Kim Jong Un has become paranoid about the influence Americans are having on North Koreans, and about the possibility of U.S. action against him,” said Bruce Bennett, a senior defense analyst and North Korea expert at the RAND Corporation. “Will Kim increase his internal purges of North Korean elites? Will he focus on North Korean defectors, people who the regime would like to silence? Or will he do both?”

Tensions between North Korea and its chief adversaries — the U.S. and South Korea — have been rising over Pyongyang’s nuclear and missile programs, as well as joint U.S.-South Korean military exercises that include training for a possible “decapitation strike” to kill the North’s senior leaders.

Bennett noted that such training has been included and expanded upon in annual wargames hosted by South Korea, which were bigger than ever this year.

But the current rhetoric from Pyongyang has a somewhat familiar ring to it. Case in point: the movie “The Interview” in 2014.

In June that year, the North denounced the Seth Rogen comedy, which portrays the assassination of Kim Jong Un for the CIA by two American journalists, as “a most wanton act of terror and act of war.” A few months later, hackers broke into Sony Pictures Entertainment computers and released thousands of emails, documents, Social Security numbers and other personal information in an attempt to derail the movie’s release.

The U.S. government blamed North Korea for the attack. Pyongyang denies involvement, but has praised the hackers.

The North’s claims of a plot to kill Kim Jong Un with a biochemical agent also have an eerie similarity to the assassination of his estranged half-brother, Kim Jong Nam, at an airport lobby in Malaysia in February.

In that attack, seen by many as orchestrated by the North, two young women who were allegedly tricked into thinking they were taking part in a television game show, rubbed the deadly VX nerve agent onto the face of the unsuspecting victim, who died soon after.

Eight injured in bus accident in Baitadi
50 minutes ago