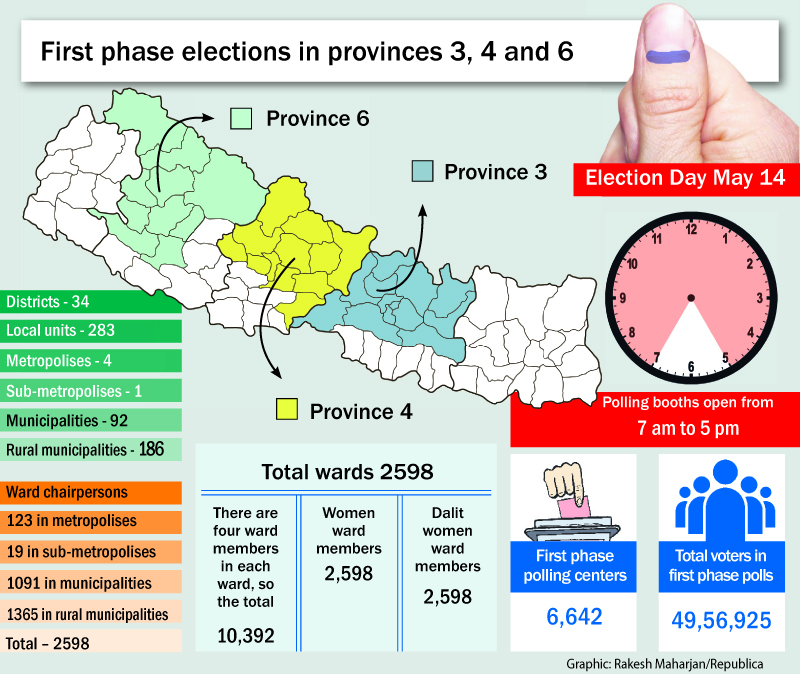 KATHMANDU, May 2: Political parties and independent candidates in 34 districts of three of the provinces registered their candidacies for the first phase  local elections scheduled for May 14.

Candidacy registrations were largely peaceful. Encouraged by the looming elections, leaders and cadres of major political parties and independent candidates reached the local election offices and registered their candidacies with fanfare. The elections are taking place after a gap of 19 years.

“I am extremely happy today. Candidacy registrations have  concluded in all 283 local units in a peaceful manner. This has now ensured the May 14 elections. Also, it has paved the way for holding the remaining elections,” Chief Election Commissioner Ayodhee Prasad Yadav told  Republica after the nominations concluded.

As per the EC’s program, the candidates filed their nominations for local elections within the set time period. In  some districts,  election officials had to work till late evening due to the increased number of candidates. “We cannot turn back candidates as they had appeared at the election office before the expiry of  set time,” said Election Commissioner Ila Sharma.

At the time of going to press,   returning officers in Kathmandu were busy  calculating the number of candidates.  “We are still taking updates from local returning officers. The final number of candidates and the representation of women, Dalits and marginalized communities will be compiled only by tomorrow,” said EC Spokesperson Surya Prasad Sharma.

As part of conducting the polls in two phases, the government has announced the first phase  elections for 283 local units in provinces 3, 4 and 6. Elections in the remaining provinces are scheduled for June 14.

Experts in election matters say the local elections have opened  the avenues for the marginalized communities. At least 40 percent women representation has been ensured in the local units. Their nomination as chiefs or deputy chiefs of local units is also a mandatory provision.

Despite progressive provisions for the representation of women, Dalits and the marginalized  in the constitution and the electoral laws, only a limited number of women candidates registered their candidacies. Most of the parties have confined women candidacies  for the deputies of the rural councils and municipalities.

Women who made it to major local unit posts

KATHMANDU, May 19: Even as the dominance of male candidates for the executive posts continues as the vote counting for the... Read More...