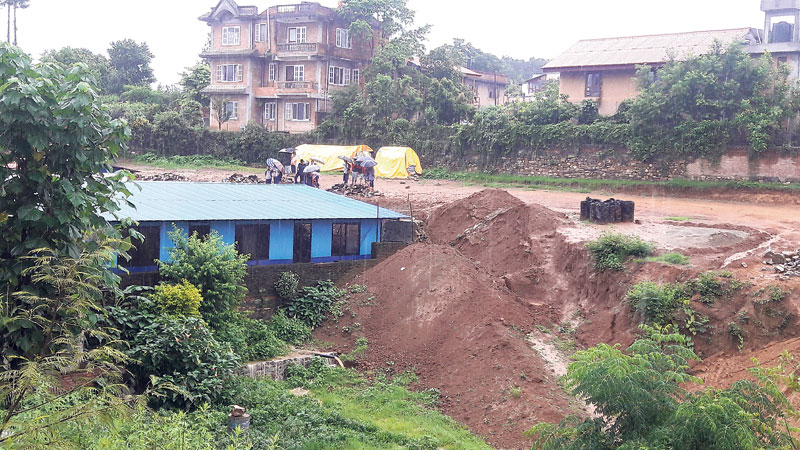 The prefab schoolhouse of Pushpanjali Secondary School, into which an adjoining retaining wall collapsed killing two schoolchildren and injuring 25 others on July 1. (Pratik Rayamajhi/Republica)

KATHMANDU, July 13: A panel formed by the government to investigate into the July 1 wall collapse incident in which two students had died and 24 others were injured at a school in Badegaun, Lalitpur has blamed sheer negligence on the part of both the land developers and the school administration for the incident.

The panel which submitted its report to the home ministry on Tuesday has stated that the land developers intentionally built a heavy wall close to the school building without seeking authority from the municipality office and also violated the building standards set by the government. The panel has said that the land developers-- Naresh Bajracharya and Karma Bangale Lama -- are the main culprits behind the incident.

Likewise, the panel has also held the school administration responsible for the incident as the administration did not lodge complaints with the local authorities despite knowing that the wall close to the school building was constructed in violation of construction standards set by the government and there was risk of possible collapse of the wall.

"So, we concluded that both the land developers and the school administration must be held responsible for the incident," Joint Secretary Krishna Prasad Raut of the home ministry, who was the coordinator of the panel, said.

The panel, however, has recommended to the government that the land developers Bajrachayra and Lama must be held responsible for the whole incident as they built the wall against the existing standards and they should cover all the expenses of the injured and compensate the families of the deceased children.

Raut said that the land developers were found not adopting even basic safety measures while constructing the compound wall next to the school building let alone seeking permission from the municipality office.

The 10-foot wall constructed with heavy rocks had collapsed after rainwater weakened its base, leaving two students dead and 25 injured. The school had built its classrooms with prefabricated walls a few months after the devastating earthquakes last year.  According to school officials, the retaining wall had collapsed into Class III and VIII of the school, burying the students before they had time to escape.

The five-member panel which was assigned to probe the incident and submit the report to the home ministry within seven days asked the  government to formulate clear standards for structures to be constructed in and around any school compound. Likewise, the panel has also asked the government to formulate a strick penalizing mechanism for taking legal action against those violating the government construction standards.

GAUSHALA (Mahottari), Sept 1: A pregnant woman was killed when a private school compound wall collapsed and hit her at... Read More...

KATHMANDU, July 5: After three days of the wall collapse that killed two students and 24 others injured at Pushpanjali... Read More...