The trip of a lifetime

If you think everyone you know is going to Mustang these days, you are right. It was always a popular destination and, in the recent times, that popularity has soared. Also known as the last forbidden kingdom of Nepal, Upper Mustang is a mystical valley with trans-Himalaya landscape, and ancient Tibetan and Buddhist shrines to keep you company along the way. And unlike before, it’s not that hard to reach Mustang anymore.

There are numerous ways you can get to this splendid place and The Week is here to help you plan your trip.

The relatively easy way
One of the easiest ways to get to Mustang is by local transportation. You first travel from Kathmandu to Pokhara and from Pokhara to Beni. This trip can be covered in the same day and you can spend the night at Beni. At Beni, there are buses departing at regular intervals, and you don’t have to worry about booking tickets well in advance. Get on a bus that will take you from Beni to Jomsom, which is roughly a six-hour drive on a treacherous road. Once you reach Jomsom, you can go up to Muktinath on the same day in a hired van or opt to stay in Jomsom for a night. From Muktinath, you will have to walk to get to Upper Mustang and Lo Mangthang. The roads are not vehicle friendly, unless you want to ride a bike in the rough terrain. People who are short on time opt to travel this way.

Tough it out
Upper Mustang is known as ‘Mini Tibet of Nepal’. “The trek is famous not just among foreign tourists but also among the Nepali crowd as well,” says Pradip Tamang of Wilderness Excursions. The trek through the barren landscape, with steep rocky trails both while going uphill and downhill is accompanied by some mind-blowing views of the Annapurna, Dhaulagiri and Nilgiri mountains. “The trek is one of the best not just because of the views, but also because the people living in this remote region whose warm hospitality will make you fall in love with the place even more,” says Tamang.

The trek begins from Jomsom. You can drive to Jomson or fly there. From Jomsom, walking on the Kali Gandaki riverbed leads you to Ekley-Bhatti village after walking for roughly three hours. Kagbeni is an hour of easy walk from this stop. You can opt to stay the night in Kagbeni and then walk up to Chele that is a five to six hour hike, depending on your pace. This route takes you through Tengbe village with its white washed houses and apple orchards.

The next day, you walk seven hours to reach Syanbochen. This route has views of the Tilicho peak and the Damodar Danda. You even get to descend amongst the streams along the way, and relax with the juniper trees surrounding you with the sound of the water roaring in your ears. Day four sees you walking from Syanbochen to Ghyami that takes about six hours. Here you will pass teahouses and Tibetan style houses with open verandas. For the next two days, you walk from Ghyami to Charang and from Charang to Lo Mangthang, both of which are about five hours walk each.

A day in Lo Mangthang is usually enough to explore all the places it has to offer, unless you want to just revel in the grandeur of the place for a few days. You can visit the Namgyal Gompa, Tinghar, Champa Lakhang and the four-storey palace of the king. The view of the Himalayas from here is simply stunning.

On the return journey, you can either go back the way you trekked or take another route. The alternative route you can take is to go down to Drakmar from Lo Manthang. From here, you continue descending, and you will reach Chuuksang on second day, with a night in Ghiling. From here, Jomsom is a seven-hour walk, and you can either fly out or drive back to Pokhara and then get to Kathmandu from there.

Ishan Onta who went on a Manang to Mustang trek during the peak season calls it the best days of his life. The lack of seats and the fact that all the hotel rooms had been booked resulted in him traveling in the back of a pickup truck and sleeping, exhausted, on the dining room floor.

Adventure awaits
“Bikes are the best way to see the world,” says Matt Gardener, owner of Hearts and Tears Motorcycle Club in Pokhara. He loves the fact that there is no metal frame to protect him from living in the moment while on a motorbike. He has been to Lo-Manthang on his Royal Enfield. Riding on a bike through rough terrain bonds you with your bike like nothing else can. Every morning, the first thing he did while on the trip was to make sure that his bike was running in peak condition.

“With a vintage bike like an Enfield, you have to be careful to notice the differences in the sound it makes. Modern bikes are easier to take off road,” he says. Their group was one of the first groups to ride their bikes to Lo-Mangthang. There were many parts where him, and his father, who joined him on the trip, had to push the bike because the climb was too steep. Pushing a bike is harder the higher you go, and he remembers they kept taking turns to do it.

After being on the road for seven days from Pokhara, they finally reached Lo Mangthang. “I remember how neither of us spoke for quite a long time when we reached the top. The feeling of actually having done it after a week of hard work was incredible,” he says.

Driving on the dangerous roads were hard and they ended up spending a few days in Lo Mangthang, and made a lot of easy side trips to nearby places. They even went on to the Tibetan plateau, close enough to the Chinese border to wave at a CCTV camera. He loves the fact that it is an experience he got to share with his father. “It is one of the most memorable trips I have been on till date,” says Gardener. He loved it so much the first time he went with his father that since then he has led an expedition and been there with his friends as well. 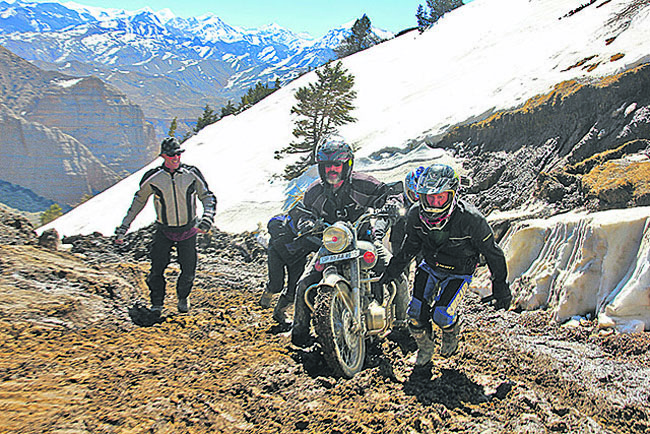 The trip of a lifetime

Today, travelling has become the norm and travelers are aware and updated about all that the world has to offer.... Read More...